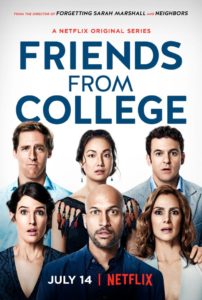 With the sheer volume of content flooding our brains on a daily basis, it is becoming increasingly more difficult to keep tabs on what new television series are launching, at what time, and on what platforms. That being said, it’s hard not to get excited for the ones that are being spearheaded by the best and brightest talent both behind and in front of the camera. That is certainly the case with the new Netflix series “Friends From College,” an ensemble comedy with a stacked cast (Cobie Smulders, Keegan-Michael Key, etc) and a creator/writer/producer (Nicholas Stoller) known for bringing the laughs with films like “Neighbors” and “The Muppets.”

We recently sat down with “Friends From College” star Jae Suh Park to discuss her expectations for the series, being the weirdo at the bus stop, and the perks of being married to a superhero.

TrunkSpace: Have you had to emotionally disconnect from it since you wrapped shooting or is it something you can’t help but get excited about as it gears up for release?
Jae Suh Park: Well, we shot it last fall in New York for about three months and right after it, I did kind of forget about it. But I’ve been thinking about it a lot more now because we were just in New York for the premiere last week, and then I’ve just been hearing stuff about it and seeing stuff, so I’m thinking a lot more about it now. But I didn’t for a long time, because you just kind of move forward.

TrunkSpace: There must be a bit of a defense mechanism aspect to it because you ultimately have no control over things once your job is done?
Jae Suh Park: Well yeah, and you just never know how long it’s gonna take. Sometimes you shoot something and it comes out 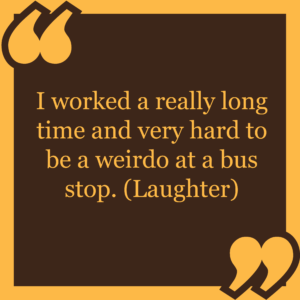 right away, and other times it can take years. Especially cable shows. I guess it’s partly a defense mechanism, because you never know. As far as movies go, or even TV, maybe you got cut out. Maybe your part is not as big as you thought it was. I definitely had experiences like that in the past. (Laughter) So you can’t just go ahead and tell everybody that you’re going to be in this big show, or be in a big movie, and then have all your things cut out. So yeah, I did some of that for sure.

TrunkSpace: We saw the poster for “Friends From College” and there you are, front and center with the rest of the cast. Did that help it all feel more real for you?
Jae Suh Park: Oh yeah, definitely. And then we have separate posters… each of us has a separate poster. It says what we are and I’m “The weirdo.” The friend who’s a weirdo. And it’s been on all the bus stops here in LA. So I’ve had friends text me and I saw two of them by where I live, and I was like, I worked a really long time and very hard to be a weirdo at a bus stop. (Laughter)

TrunkSpace: (Laughter) In order to be the weirdo at a bus stop you really have to stand out.
Jae Suh Park: (Laughter) Especially in LA.

TrunkSpace: The series creator is Nicholas Stoller and he has become synonymous with quality comedy, especially on the feature side. From a performance standpoint, comedy must be very fun to explore in a series because you sort of get to see the funny spread out over the course of what is usually multiple arcs, not just one arc.
Jae Suh Park: Yeah, that’s what’s so exciting is that you can explore the character in so many different situations and they just kind of take twists and turns. But I know Nick really wanted to make this kind of like a very long movie. It definitely ends open-ended. It’s not like the complete series. It’s not like “Big Little Lies” or something where it’s just kind of one movie. So going back to what you said, it’s very exciting to be able to explore so many different sides of the character.

TrunkSpace: When you look beyond the series itself and at the current TV landscape as a whole, what’s the most exciting part for you as an actress in what a lot of people are calling “The Golden Age of Television” and what that means in terms of roles and characters available?
Jae Suh Park: I get to play a weirdo, which I don’t know if I would have been able to five years ago. (Laughter)

There’s definitely a lot more opportunities for everyone involved in the business. So that’s exciting, but as a viewer, I don’t get to watch as much as I want to just because it’s so much… and I think also the good thing and the bad thing is that you can kind of watch what you want and not at all know anything about anything else. If you’re a very huge fan of “Westworld” you may know all of the actors on the show, but if you’ve never seen the show, you would be like, “I have no idea who that person is.” It’s good and bad because you can definitely have anonymity that stars in the past didn’t have as much.

TrunkSpace: You actually worked with your “Friends From College” costar Cobie Smulders on an episode of “How I Met Your Mother” a few years back, correct?
Jae Suh Park: Yeah, it’s so funny because that’s how I met Cobie for the very first time and my husband is actually really good friends with her husband and they had worked together. I had met him just briefly and when I got the part I went up to her and I said, “My boyfriend knows your boyfriend!” And this is before we were even married or had kids, and now we’re both married and we both have kids. But that was the first time that I met her and worked with her, and that was forever ago.

TrunkSpace: And that was a very memorable episode of “How I Met Your Mother” because it introduced the woo girls… and a quotable “woo” has been echoed ever since.
Jae Suh Park: Yeah, I think I said, “woo” maybe… I don’t know how many times. Let’s just say the script was very easy to memorize. (Laughter)

TrunkSpace: What’s great about “Friends From College” is that you guys really have this amazing on-screen chemistry together, as if you actually are a group of old friends.
Jae Suh Park: Yeah, that was one of the very first things that a lot of people noticed because I had only worked with Cobie that one time eons ago and I knew Keegan just socially. And then I’d never worked with the others or any of the guest stars and it was just immediate. We all had so much fun off-screen and on-screen. Even at our very first wardrobe call everybody was like, “Do you guys know each other or have you guys worked together?” All of us except for Keegan have kids and we’re married, so I think that definitely bonds us with Nick. I’m grateful for it because that doesn’t always happen.

TrunkSpace: We know that your husband (Randall Park) was just cast in “Ant-Man and the Wasp” and we’re curious, has he been introducing himself as your “superhero husband” now because that’s totally what we would do with our wives?
Jae Suh Park: (Laughter) No, he’s not. He’s not introducing himself as my superhero husband, but he’s been working out quite a bit because he says he’s gotta look good. I think he’s just in suits. But I will note, I’m not that familiar with the comic, but he did show me some art… some old issues, and the character is buff. I’m not complaining at all. I feel like that’s a perk of being married to a superhero.