Unless you’re a sailor from the 15th century with a belly full of wine, you probably don’t have a lot of experience with mermaids. That being said, Ian Verdun, star of the new drama series “Siren,” which premieres March 29 on Freeform, promises viewers will find plenty to relate to when mermaids come ashore in the fictional town of Bristol Cove.

The Los Angeles native portrays a salt-of-the-earth fisherman in the new series, and it’s these types of real, recognizable people that he says helps to ground the fantastical elements of “Siren.”

We recently sat down with Verdun to discuss why he thinks the series will have no problem finding an audience, how success won’t mean it arrived overnight, and the reason he genuinely loves portraying his character Xander.

TrunkSpace: Freeform has an amazing track record of building and establishing shows that amass really passionate fandoms. In everything that you have experienced and seen of the show thus far, does it have that same fandom-building potential?
Verdun: Absolutely. I think it could do it on a number of levels, actually. First and foremost it’s about mermaids, so I think there’s already such an avid fan base for that creature, for that folklore, all across the planet. There’s no country in the whole world that doesn’t have some kind of dedication to mermaids, some kind of cultural cornerstone where it deals with those creatures, so I think that alone is gonna have a lot of people very interested from the beginning. And then when they really get into the story and they get into the characters, and they get into what we’ve actually done with these characters, I really think people are gonna find a passionate new angle. And my character, he’s not a supernatural thing. I definitely am not a mermaid. Spoiler alert. (Laughter) But I think there’s something so human about him. When you have characters who do things that are just incredibly relatable, incredibly human, especially against the backdrop of something so crazy and so out there and off the wall, you really find a way to just see yourself in all of these people, in all of their situations, and in all of their hardships in spite of all the zaniness that’s happening.

And I think that the writers have really done a great job of keeping everybody grounded, so when people watch, it’s not just about 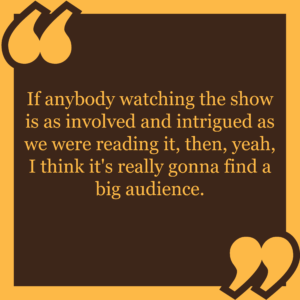 flippers and fins and intrigue and mystery and all of that other stuff, which is great and awesome, and I enjoy it – I enjoy genre TV like anybody else – but I think the thing that keeps you coming back and makes you really passionate is the people. I tip my hat off to them (the writers) because I was just so excited to get a script every time, because we would just eat it up and just zoom right through every script. It was the only opportunity for us to be fans, because it’s spoiled for us. We already know what’s happening. If anybody watching the show is as involved and intrigued as we were reading it, then, yeah, I think it’s really gonna find a big audience.

TrunkSpace: What’s interesting about mermaids is that, while it’s a recognizable creature, they haven’t been overly exposed in the world of modern pop culture.
Verdun: I totally agree. And I think there’s actually a couple of reasons for that. One I think is that it’s probably just incredibly expensive, technically, to do it, especially on television. It’s a lot of water. It’s a lot of stuff. So I think we’ve just kind of come to a point in time in television, just technically, where we’re able to pull off something like this and make it believable and real and fresh. But I also think culturally we’re just in a different place where Women’s Liberation, the #MeToo movement, Time’s Up and all of these things are happening when it comes to narratives that center on women in positions of power, and I think that before now, it’s been very rare to actually look at these kinds of creatures, these stories, and actually focus in on them and break them down because people weren’t paying attention before.

TrunkSpace: The show is already creating a buzz, and again, Freeform is very good and finding audiences for their programming. With all of that being said, does it feel like “Siren” could be a game changer for you as far as your career is concerned?
Verdun: I mean, one can only hope, right? Don’t count your fish before they’re caught, right? (Laughter) But I would hope so. For me, it’s not really an overnight success. It takes years to become an overnight success. I graduated from college back in 2007, so it’s been a long haul for me.

It’s about the integrity of the story that you’re telling and it’s about the craft, no matter what the project is, you know? You always wanna do your best work and you always wanna be able to stand up and stand behind what you’re doing and be able to defend it, and I’m very lucky with this show that I genuinely enjoy it and I genuinely think it’s a great show. I’m very lucky to be going into this particular process with a project that I really, really, really love. It makes things, I imagine, so much easier. This is the first time I’m doing any of this, so it’s not like I have a lot of comparative experience.

TrunkSpace: Like many other shows nowadays, “Siren” is adopting a smaller season order (10 episodes), which for viewers, feels more consumable. You’re getting story, not just filler content.
Verdun: Exactly. You don’t have those little standalone episodes. It really kind of felt like we were shooting a movie every week. It’s just the production value and the amount of people that are involved, and sometimes, the depths that we had to… pun totally not intended, but kind of intended… the depths that we had to go to to really find characters and to really tell a very honest story about them in light of, like I said before, all the craziness. So I think it’s also advantageous to have smaller episode orders because you’re able to put some money into it, and put some bang into the episodes that really just, you know, knocks everything home, because when it looks beautiful and when everybody’s happy, it shows up on screen.

TrunkSpace: We know you can’t go into too much of the story, but can you give us a taste of what Xander’s personal journey is over the course of that first season?
Verdun: I would love to go into details, but obviously, I can’t. (Laughter)

TrunkSpace: (Laughter) Contractually you can only confirm that you’re NOT a mermaid.
Verdun: (Laughter) Yeah. All I can say.

What I can say about Xander is I think his journey is incredibly relatable, even though, you know, it’s mermaids and I doubt too many people can relate to dealing with mermaids. I’ll be very surprised if they do. (Laughter) But I think his journey is about friendship and it’s about loyalty and maybe misplaced loyalty. And I think it’s also about family for him. His entire outlook is very tied up in the people that he’s with and he’s around. I think he’s an incredibly smart guy, he’s incredibly intelligent, but I don’t think people give him credit for it. What I do love about him too is he’s just this regular dude. He’s a working class, blue collar fisherman, and I think to give that perspective a younger face, and even to give that perspective a brown face, to me it’s really interesting. I rarely ever see fishermen on TV or even blue collar characters as people of color. They generally aren’t. But we exist, they exist. I don’t come from a high class, upper class, or even upper middle class family at all. I grew up pretty poor. We have blue collar people that have very different faces and it’s almost an honor to be able to represent that and to put a human face on it that looks a bit different.