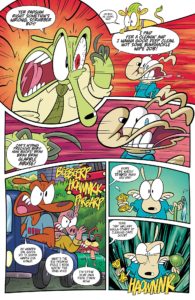 Favorite Comic Book Character Growing Up: For superheroes? Swamp Thing, hands down. Especially the Alan Moore run. However, I can’t rule out Calvin from “Calvin and Hobbes,” a character I wished I could become and still do.

Favorite Comic Book Character Now: It’s still Calvin, but I did recently go back and re-read “We3,” and my new favorite could be that grenade rabbit.

Latest Work: (Title/Publisher/Release Date) “Rocko’s Modern Life” Issues 1-4/kaBoom!/2018. I’ve been working at Nickelodeon on the upcoming “Invader Zim” movie as well, plus “GLINT” with Lion Forge out next year, and tons of “Adventure Time” books.

TrunkSpace: How would you describe your art style?
McGinty: Hm, that’s tough. I guess I’d have to say my art style combines cutesy cartoony with dark and goth layers when needed. I tend to go between soft circles and big eyes, to a ton of lines and shadows. So like, H.R. Giger meets Sonic the Hedgehog.

TrunkSpace: How important were comic books in your life growing up and is that where you discovered your love and inspiration for drawing?
McGinty: Comic books weren’t huge early in my life simply because we didn’t have one close in town, and the ones I did run into weren’t the well-lit, well-stocked and diverse places they are now. They could be pretty scary and almost none of them stocked “all-ages” comics or manga or whatever, so I turned to newspaper comics and later on got into zines and stuff like that. I’ve been collecting “Swamp Thing” issues for a long time now and I always snag cool graphic novels and collections.

TrunkSpace: Was there a particular artist or title from your childhood that you remember being drawn to and inspired by?
McGinty: He won’t see this I think, but my current boss, Jhonen Vasquez was a big one later on, but for me, it will always be Bill Watterson. Watterson’s art and humor was extremely influential to me as a kid and still is. 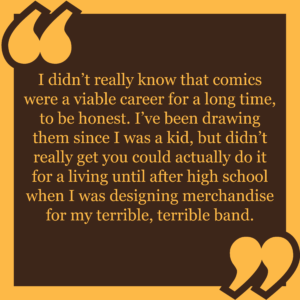 TrunkSpace: How did you decide to approach your career in comics? Did you formulate a plan of how you wanted to attack what is known for being a hard industry to crack?
McGinty: I didn’t really know that comics were a viable career for a long time, to be honest. I’ve been drawing them since I was a kid, but didn’t really get you could actually do it for a living until after high school when I was designing merchandise for my terrible, terrible band. I started researching colleges once I realized I wasn’t going to be a rock star, and I found a school in Savannah, Georgia that specialized in sequential art (comics, animation, etc), and I pretty much started getting gigs from there. It was all very natural and I was very lucky.

TrunkSpace: What was your biggest break in terms of a job that opened more doors for you?
McGinty: Oh, definitely from Whitney Leopard, Associate Editor over at Boom! Studios. She got me some cover work that eventually led to my first lead artist job on “Adventure Time.” She is cool as heck, and still regularly hires me (which makes her even cooler).

TrunkSpace: A lot of people say that breaking into comics is the hardest part of working in comics.
How long did it take you before you started to see your comic book dreams become a reality?
McGinty: I actually started getting work pretty early on in my career, I think partly because of luck and my own comics, but also because I got known for being able to match style guides for licensed properties, like “Bravest Warriors,” “Hello Kitty” and “Rocko’s Modern Life.” I also work very, very hard, probably too hard, but it’s all really worth it.

TrunkSpace: Is there a particular character or universe you always find yourself returning to when you’re sketching or doing warm-ups?
McGinty: Totally. My character Kit from “Welcome to Showside,” I’m just very used to drawing him, and I enjoy practicing with Catbug from “Bravest Warriors” just cause he’s so darn cute!

TrunkSpace: Is there a specific title or character that you’d like to work on in the future and why?
McGinty: I’ve been trying to get a “Clone High” (from the MTV show) comic off the ground for a while, so that’s one for sure. And we’re working hard to develop “Welcome to Showside” into an animated series. But I’d really love to do a run on “Swamp Thing,” hell, any kind of cartoony take on Spider-Man would be rad. Love that guy. 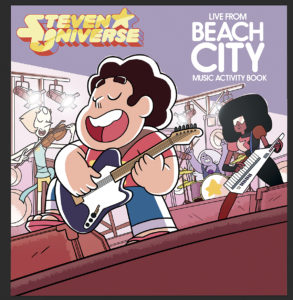 TrunkSpace: What is your ultimate dream when it comes to your career in comics? Where would you like your path to lead?
McGinty: For me it’s simply having my own series that people enjoy, and my path is leading me into more animation stuff. A big goal for me is to create my own television show that intertwines with a comic series, sort of how you’ve got these great animated programs now that get awesome comic spinoffs, like “Rick and Morty,” “Bob’s Burgers,” Sonic, “Adventure Time.” You get the idea.

TrunkSpace: What would you say is the greatest strength as an artist?
McGinty: Versatility and speed. I like being able to jump back and forth between styles, and being fast has helped in a lot of ways. I’ve found that it makes your relationship with editors and producers much more pleasant, to say the least.

TrunkSpace: How has technology changed your process of putting ideas/script to page? Do you use the classic paper/pencil approach at all anymore?
McGinty: I work completely digitally now, but it’s pretty recent. It makes things a lot easier when sending pages to print, and it’s fast. Not to mention, you can get digital brushes that are indistinguishable from natural ones (at least to me), and just basic clean-up is so simple. I mean, I can’t knock over a bottle of ink when I’m using a Cintiq and Photoshop.

TrunkSpace: What advice would you give another young aspiring artist who is considering a career in the comic industry?
McGinty: Don’t focus so much on you individual “style,” don’t obsess about drawing the “perfect page.” It isn’t going to happen. Just create content and people will find you. I’ve seen it time and time again, an artist has a million excuses why they haven’t started their dream book yet. (“I’m not quite there with my artistic abilities.” “I haven’t figured out what this character looks like yet.”) Just get on it, man! Also, drink water.

TrunkSpace: Making appearances at conventions: Love it, leave it, or a combination of both?
McGinty: Love it. I really enjoy interacting with people at conventions because I’m free to nerd out over things and I’m obsessed with artists who do amazing cosplay (I can’t), and I get to meet new people and see old friends.

TrunkSpace: What is the craziest/oddest thing you’ve ever been asked to draw as a commission?
McGinty: I’m not going to get into the bizarre sexual shit I’ve been asked to draw, because I always say no, but I did have a guy at a con in Calgary, Canada ask me to draw Finn from “Adventure Time”… coming out of a TARDIS from “Doctor Who”… on top of the mountain Smaug lives in from “The Hobbit”…wielding a lightsaber from “Star Wars”… and next to that tree that punches things from “Harry Potter.” Like… my dude. The kicker here is I spent hours drawing it and he hated it and demanded his money back. Oh, well.

TrunkSpace: What else can fans of your work look forward to in 2018?
McGinty: Well, the “Invader Zim” movie will be coming out so that’s awesome. We’ve got more “Adventure Time” books on the way, my own book, “GLINT,” will be out very soon, and I’m working on some secret projects I can’t talk about (yet). I’m looking forward to 2018. 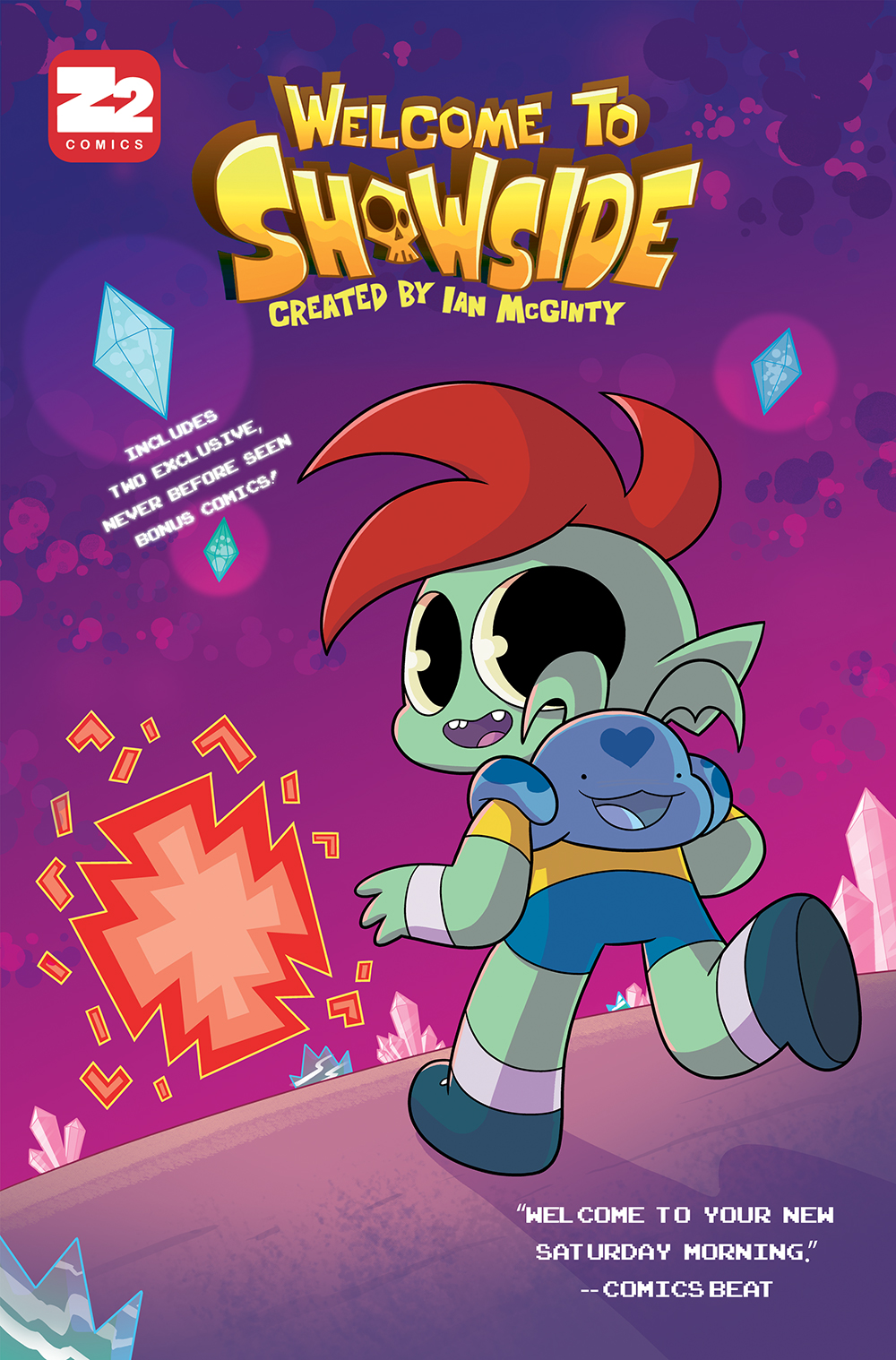