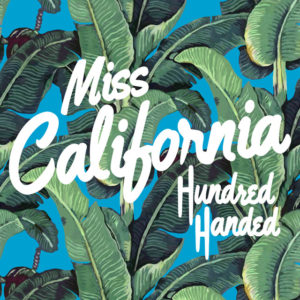 Hundreds of hands have been thrust together in applause for Hundred Handed since they formed in 2015. Part pop and part punk, the Los Angeles-based trio has been putting the fun in funambulist, which for those without a dictionary handy, is a super formal word for tightrope walker. Why are they walking a tightrope? Well, the music industry is not an easy nut to crack and yet the three friends dove headfirst into a pool an ocean away, kicking off their career in Australia where they played their first live show in front of 10,000 music fans. And all without a net!

We recently sat down with drummer Drew Langan to discuss how there is no Slipknot to be heard in their music, why nothing would be a departure sonically for the ever-evolving band, and how they would revamp a cartoon classic.

TrunkSpace: You guys have all been in different bands with different people over the years. What is it about Hundred Handed that clicked and made not only creative sense but inner-band relationship sense as well?
Langan: Even in previous bands, we were always hanging out with each other for the most part. We’ve always been on the same page with the music we want to make and with pretty much everything for that matter. Also, nobody can drink like we do, so we’re kind of stuck with each other.

TrunkSpace: The band has been together since 2015. How long did it take for you guys to figure out who Hundred Handed was in terms of sound?
Langan: Well, we thought we had it figured out immediately! In hindsight, we had some evolving to do. We’ve been writing and recording nonstop, so it didn’t take more than a few months to really figure out who we are and what we sound like.

TrunkSpace: Your tunes are a sort of musical upper. We listen, and we can’t help but get amped up and happy. Is that a goal when you guys sit down to write new material?
Langan:: 100 percent. We spent enough time being angsty and heavy and we wanted to get back to the root of why we do this. To have fun! We want to have fun while we’re doing it and we want that to translate to everyone who listens to us. There’s absolutely no shame in having too much fun.

TrunkSpace: You guys have a wide range of musical influences. Who of those influences do you hear the most when you listen to your own songs back?
Langan: Well I definitely don’t hear any Slipknot, which is probably a good thing. (Laughter) That’s a tough one. I hear some Blink-182 and definitely some Daft Punk.

TrunkSpace: One of the coolest things about creating music or art is that a day will come where the stuff you’re creating will then influence someone else. Have you given any thought to the idea 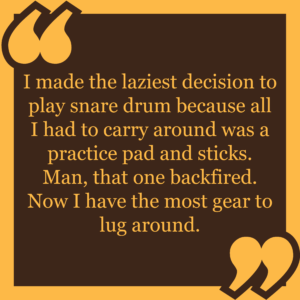 that you may inspire some kid somewhere to pick up his first guitar or pound out some beats on a kit for the first time?
Langan: Yeah, of course! If some kid came up to me and told me he started playing drums because of me, Jordan would NEVER hear the end of it. I’d be insufferable. It would be amazing!

TrunkSpace: Who inspired you guys to pick up your first instruments?
Langan: I was actually kind of forced by my elementary school. I made the laziest decision to play snare drum because all I had to carry around was a practice pad and sticks. Man, that one backfired. Now I have the most gear to lug around.

TrunkSpace: The band has dropped a few singles throughout the course of 2017 thus far. We have noticed a lot of bands have been taking that approach to their music, which in a lot of ways, harkens back to the dawn of commercial music. As far as Hundred Handed is concerned, what is the benefit to releasing singles as opposed to a full album all at once?
Langan: We just want to get the music out there. These days, it’s so easy to release a single song so if we’re excited about one, we put it out. We still like the idea of putting out entire albums, and we will probably do that at some point, but we’ve been writing so much that we had to get some out.

TrunkSpace: Have you guys tried anything new or different with the upcoming material that is a departure from what we know of Hundred Handed already?
Langan: I wanted to do some Josh Groban covers, but I got vetoed on that. I’m joking, but like I said, we’re always evolving. There’s nothing that I would consider TOO much of a departure though. We’re just getting better!

TrunkSpace: You guys gave some love on Twitter to the news that there is an “Animaniacs” reboot in the works. If Hundred Handed was asked to make the new theme song, what would you do to the original to modernize it and give it a Hundred Handed spin?
Langan: Oh what a song! I think I still know all the words. We’d take it into the studio and play it the way we play, but I honestly think we’d keep it pretty close to the original. It’s hard to mess with such a classic.

TrunkSpace: Another Twitter shout out we see a lot of from you guys is giving social media props to random national whatever days. There seems to be a day of recognition for pretty much everything these days, BUT, what’s one day the band would like to celebrate that is missing from our world?
Langan: Well there’s already National Whiskey Day so… no, I think we’re good! Maybe if we take that one step further and make it National Jack Daniels Day. I swear we are keeping those guys in business.

TrunkSpace: What’s been the career highlight thus far and what is on the list of “things to achieve” for the remainder of 2017 and into the new year?
Langan: The first show we ever played was in Australia for a crowd of 10,000. That was pretty insane. Just getting to see Australia in general and knowing that our music got us there was a pretty huge highlight. As far as the future, we’re planning on hitting the road and getting some touring under our belts. Time to go out and play these songs a few hundred times!