Kathrine Herzer is one of the coolest people working in television. Want to know how we know? Because we ruined “Game of Thrones” for her and she did not hang up on us. In fact, after our uncomfortable awkwardness subsided, the conversation went smoother than an Arya Stark execution as Herzer shared amazing insight into her career and her work on the hit television series “Madam Secretary.”

Seriously. We completely screwed the White Walker pooch on this one. (So be warned… SPOILER ALERTS AHEAD!)

We recently sat down with Herzer to apologize profusely, to discuss how she learned so much from her talented costars, and to discover why you’d have to proceed to fisticuffs in order to keep her from working towards positive change.

TrunkSpace: We saw on your Twitter page that you are a “Game of Thrones” fan. Thoughts on a White Walker dragon?
Herzer: Oh my god! I’m not caught up!

TrunkSpace: Oh no! We are so sorry! Nooooo!
Herzer: (Laughter) Oh my god! Spoiler alert! (Laughter)

TrunkSpace: We take it all back. That never happened. Totally rewinding this conversation.
Herzer: (Laughter) Oh my god! It’s already burned from my brain.

TrunkSpace: Seriously… so sorry!
Herzer: It’s okay. I already don’t even know what you said. I don’t even remember.

TrunkSpace: We’ve actually never seen “Game of Thrones,” so we don’t even know what we’re talking about. 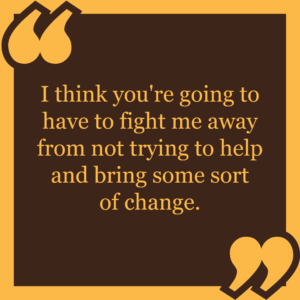 Herzer: You had a dream last night and that’s what came to you.

TrunkSpace: Soooooo… moving on to the non-GoT portion of this conversation, you’re still at such an early stage in your career and yet you’ve already experienced playing the same character for over 60 episodes. What has that experience been like for you, essentially growing as two people in front of an audience of millions?
Herzer: It’s so cool to see how someone develops over that amount of time. Three or four years with someone, they change so much, especially at this point in my life and this point in Alison’s life. I’ve really loved the moments where our lives have crossed paths, like when I’m struggling and I’m feeling down and it just so happens that episode is written the same way and I get to bring so much of my own life to it.

At the same time, Alison and I are completely, completely different people. Sometimes she makes me slow down in my real life and say, “Maybe this isn’t as black and white. Maybe it’s not as simple.” Because she looks at things from a not-as-jaded perspective. She’s really willing to look at things and learn about things and it’s a really nice contrast to me as a person. I love to learn too, but I’m a little bit more stubborn. (Laughter)

TrunkSpace: You mentioned bringing yourself into the character on those days when you’re feeling down, but does it ever work the other way around? Does something that Alison is going through ever carry over into your life?
Herzer: Definitely. It’s hard because when you have such a fun set, and I love all the people that we work with… the camera guys are like my best friends as are the wardrobe people… we’re all so close that we joke around so much, so sometimes when I have to come down and get into a more calm state or a sad state it can take a minute for me, but they’re also really supportive and everyone’s really respectful.

Most of the time we’re laughing and we’re having fun and that’s usually easier because the environment is so great. Even when I’m having a hard day I go to work and I love it. I see people that care about me and I care about them so much. People always say, “Sets are like families” and I just can’t imagine that anyone’s family feels like mine, but I guess everyone feels that way.

TrunkSpace: The great thing about your set is that it’s filled with all of these iconic actors and industry veterans. There must be a sense of, “This is not just a job, but also an education?”
Herzer: Oh my god, absolutely. My greatest education comes from Téa and Tim and just seeing how they work and seeing how they deal with material and people. That was the great part about the first year. I got to watch and learn and see different styles, and then the older I get I get to incorporate it more and become my own person and see how it fits with me and learning how to take on all of these different things I’ve learned from all these incredible people.

Like Bebe Neuwirth. She’s just such a legend. She was one of those people when I got on the show that I was just like, “Ahhhh! I can’t believe that I’m going to get to work with her because she’s just such a talent.” And she was one of the first people that just made me feel so good about my work and so proud of myself. I’m so sad she’s not coming back this season.

TrunkSpace: And the series also always has such great guest stars and directors.
Herzer: Morgan Freeman! I worked a lot with him in the episode he directed for season 4 and the first episode. That was the most time we had spent together. He’s just so full of wisdom and just being around him, being in his presence, you feel it. He enters a room and the hairs on your arm stick up. I don’t know how else to describe it, but he really is this presence and you know it. Téa’s is the same way. She walks into a room and she commands this force. I don’t even know how to describe it.

We have a powerful group of people that care about the world around them, so I’m getting to hear all of these really interesting conversations because of what’s going on politically and how that’s reflected through our show. Barbara (Hall) does such a beautiful job of feeling the pulse of what’s going on in the world and figuring out, “How can we make this digestible?” We have so, so much going on today in politics and I love that our show is giving people just a glimpse of hope.

TrunkSpace: And that’s the amazing thing about the world right now. You’re on a fictional drama about politics, but it’s probably grounded more in reality than the actual reality we’re living right now.
Herzer: Exactly! We talk a lot about “fake news” and I can’t wait for our audience to see that because it is so hard. It is so hard to figure out what’s real and what’s not in this political arena and it feels like such a game. I hate watching the news at this point. I am so sick of all of the bullshit that’s being thrown at me that I can’t even do it anymore, so I can’t imagine someone that maybe doesn’t enjoy it as much as I do or isn’t as focused on it as I am.

TrunkSpace: And therein lies the current draw of scripted television. Escapism. We can get away from everything that is terrifyingly real.
Herzer: Totally, and our show perfectly works with that because you’re not totally out of it and you really get to learn something. You have a full toolbox after watching our show to figure out the world that is the real world.

TrunkSpace: Obviously the buzzy place for viewers to land is cable and streaming platforms, but “Madam Secretary” is proof that networks can put out content of equal quality and draw a committed audience.
Herzer: Yeah, it really is an honor for us and especially because our show really gets better and better every season. We gel so much and it just becomes more and more every year. The writing gets better. We dive into the characters more, so it’s a shame to see all of these other shows that are getting cut so early because maybe if they had the same time that we got, things would have been different.

I love hearing how many young people are watching our show now. All of the time I get stopped and girls my age, guys my age, they say, “I love your show. It’s so fun.” There’s so many different elements, so it’s important not to brush-off network TV. I think network TV is still really the heart of television. Yeah, we love “Game of Thrones,” but we love it so much and that it…

TrunkSpace: We don’t even know what you’re talking about. What’s “Game of Thrones?”
Herzer: (Laughter) You’ve never heard of it.

But at the end of the day, we’re hitting a lot of people. A lot of people are watching our show and it’s very cool, especially now with the reach of Netflix. We’re getting the best of both worlds.

TrunkSpace: Has being seen by all of these people via the series altered your social life in anyway? Has it made things difficult, particularly when you hit college?
Herzer: It’s funny because I never put that upfront. I’m never like, “I’m on a TV show,” so it’s afforded me a lot of freedom. I get to experience a really normal college life for the most part because people don’t expect to see anyone. It’s a big campus. It’s a lot of people. I’ll be a parties and it’ll be like, “I was just watching TV and then all of a sudden I saw your face.” I feel very grounded and in a very normal world. I don’t feel like anyone’s watching me or anyone knows who I am or looks at me differently. I’m very lucky for that.

TrunkSpace: You star in a show about politics. You’ve previously interned for Al Gore. You’re involved in community programs. Is there a future for you in politics? Do you anticipate being drawn to trying to spearhead change?
Herzer: I think you’re going to have to fight me away from not trying to help and bring some sort of change. I’ve always been a really hands-on person. It’s so funny because I feel like a lot of people shy away from the word “activist,” but that’s such a shame. I think it’s the same sort of stigma that goes with calling yourself an “actor” or calling yourself an “artist.” Even if you paint, no one wants to say, “I’m an artist,” but everyone calls themselves, “a golfer.” That’s something we talk about a lot with the Creative Coalition that I work with.

Season 4 of “Madam Secretary” kicks off October 8 on CBS.