With Season 2 of the Hulu dramedy “Shut Eye” set to premiere on December 6, we are once again reminded of just how lucky we are to be living in a time with so much fantastic storytelling available for download into our content-hungry brains. Starring Jeffrey Donovan and Isabella Rossellini, the dark crime caper is an underrated streaming option that plays out for viewers like a caffeinated “Ray Donovan” in the seedy world of storefront psychics.

We recently sat down with new series regular Havana Guppy to discuss if she shares the same rebellious streak as her character Drina, what she has learned about herself in working on the show, and how her ideal career would play out.

TrunkSpace: The latest season of Hulu’s ‘Shut Eye” premieres in just a few short weeks. In terms of your character Drina, what are you most excited for viewers to see in terms of her journey this time around?
Guppy: I’m really excited for the audience to see a different side of Drina, and really see her grow into herself.

TrunkSpace: Did the material you were provided for Drina this season allow you to stretch yourself in a way that you have yet to do in the past with previous projects? Was there a particular moment or scene where you felt you had to step out of your comfort zone and by doing so, it paid off?
Guppy: A lot about Drina is very similar to myself. Sometimes I’d read a scene and I just knew exactly how she might feel. There are moments where I had to be very vulnerable, which can be scary. But once the scene was over, I felt very relaxed and at ease.

TrunkSpace: What was it like to learn that you would be a series regular heading into the latest season?
Guppy: It was so exciting. After I heard the news, I frantically called my mom, my dad, my grandma, and my sisters. It felt like a dream come true.

TrunkSpace: What do you personally love the most about the series? Is it the premise, the tone, or something else entirely? 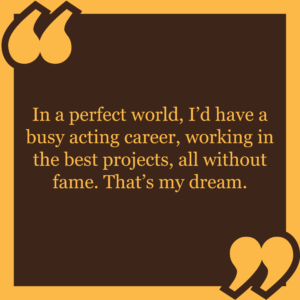 Guppy: I really love the tone of the show. I’m a huge fan of dark comedies, so “Shut Eye” really hits the mark for me. I’ve loved being a part of it.

TrunkSpace: Drina is a bit of a rebellious soul. Was that a personality trait that was easy for you to tap into? Did you have a rebellious period in your own life that allowed you to relate to that aspect of your character?
Guppy: Drina is definitely rebellious. I wouldn’t say I’ve ever gone through a rebellious phase, but I am a teenager, so I found it pretty easy to tap into that edgy teen mindset.

TrunkSpace: There’s an incredible list of talent involved in “Shut Eye,” most notably, Isabella Rossellini, who plays your grandmother. Are you viewing your experience on “Shut Eye” just as much an education as you are a job?
Guppy: Working with Isabella has been a dream. Just working with her alone taught me so much. And yes, working on the show really felt like an amazing learning experience. I’d forget it was my job sometimes. I had so much fun, and met some amazing people.

TrunkSpace: Sticking with the idea of absorbing knowledge on set, what have you picked up from other people, either firsthand or through osmosis, in these early stages of your career that you think you’ll carry with you moving forward? What have you discovered that you couldn’t have learned in a classroom?
Guppy: I’ve learnt a lot about using my voice. I’m pretty shy, so when I have an idea about my character or a scene, I often would just keep it to myself in fear of being “wrong.” While working on the show, I’d watch the cast work through the scene, put their ideas in, and ask questions. I realized I have the power to do the exact same thing. I felt my confidence grow immensely.

TrunkSpace: As you look forward, what kind of career do you want to have? If the path was yours to pave, how would you shape your journey as an actress?
Guppy: In a perfect world, I’d have a busy acting career, working in the best projects, all without fame. That’s my dream.

TrunkSpace: We read that you were first drawn to performance at a very early age. Do you think being an actress was part of your destiny or was there something or someone in your life that helped to steer you in that direction?
Guppy: My parents are a big reason I started acting so young. Even if they hadn’t been so supportive, I know I still would have ended up acting. It’s always been something that I was drawn to.

TrunkSpace: Speaking of those early days, we also read that you were convinced that you were Boo from “Monsters Inc.” when you were three years old. If Pixar came to you tomorrow and said, “We’re doing a sequel that focuses on a grown-up Boo, would you like to voice the character,” would that be the ultimate, dream-come-true gig for you?
Guppy: Oh my gosh that would be crazy! I’d definitely do it. Three-year-old me would be so proud.

TrunkSpace: In all seriousness, so much of the industry, at least on the film side, is overwhelmed with big brand characters and existing content, either reimagined or via sequels. If you could choose any character from any universe to play on-screen, who would it be and why?
Guppy: It would be exciting to one day play a princess in a fairytale, such as Snow White. It would be a lot of fun, and very different from what I usually play.