It’s been one year since Hartley Sawyer joined the cast of “The Flash,” and what a year it’s been.

Taking on the over-the-top personality of Ralph Dibny, aka Elongated Man, would stretch any performer, but for this lifelong comic book reader, settling into the part meant showing the iconic DC character’s heart, and judging by the fandom’s response, he’s bending him in the right direction.

We recently sat down with Sawyer to discuss humanizing Ralph, the joy he gets in interacting with the fans, and why a Gingold on the rocks is in order this Halloween.

TrunkSpace: “The Flash” has a passionate and very loyal fandom. How soon after signing on to play Ralph Dibny did you feel the reach of that fandom and in what ways has it touched your life?
Sawyer: It was almost immediately. In the weeks leading up to the airing of Ralph’s debut episode, I remember the shoots around the city of Vancouver. These were often at night, many times into the wee hours of the morning. Will never forget the first time I saw the crowd of fans behind police barricades, cheering and calling out whenever they got a glimpse of one of the cast. The fandom is a wonderful group of people, and my interaction with them has been an honor and a joy.

TrunkSpace: Ralph is a very popular character in the DC Universe. Did you feel any pressure stepping into his stretchy shoes and how long was it before you felt ownership in him, at least as far as the series is concerned?
Sawyer: I felt the pressure to do Ralph justice, and to bring him to life in live action. I’m a lifelong comic book fan. I know what it’s like to have extremely strong opinions on an actor being cast as a particular character. I was aware of that pressure, but it didn’t overtake me in any way. The writers, as usual, did a brilliant job with Ralph’s first episode. And with Tom Cavanagh at the helm, by the end of Day 1 I felt like I had an understanding of Ralph that was deeper than I expected. This only progressed as we worked our way through Ralph’s arc in season four.

TrunkSpace: Throughout your journey in discovering who Ralph is, did you tap into any of the vast source material that exists in the comic books?
Sawyer: I didn’t get into it too much. I didn’t want to fixate on anything and feel like I had to play something a certain way, or 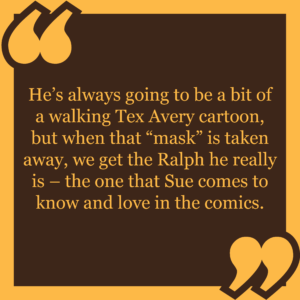 avoid something because it had been on the comic book pages. I was aware of “Identity Crisis” and had read that some time ago. That was helpful to me in the sense that from the first moment I knew the depth of caring and emotion that Ralph as a character is capable of. It’s shrouded in his sarcasm and his sense of humor, but that is always there.

TrunkSpace: What has the long-term character journey been like for you, getting to see him grow and develop between Season 4 and Season 5?
Sawyer: It’s been great. One of my goals was always to humanize him whenever possible. He’s always going to be a bit of a walking Tex Avery cartoon, but when that “mask” is taken away, we get the Ralph he really is – the one that Sue comes to know and love in the comics. Barry Allen was Ralph’s mirror in Season 4, reminding him of who he really is. He’s all heart.

TrunkSpace: We get to see a lot more of the detective side of Ralph this season, which is a part of his persona that the readers of the comic always enjoyed. How has it been exploring that side of things and having a different focus this year?
Sawyer: We’ve done some of it, and there is a lot more to come. Tom’s new Wells, Sherloque, plays into that quite a bit. The detective side of Ralph is easily one of the parts of him I enjoy the most.

TrunkSpace: How has appearing on the show impacted your career the most? Has getting the opportunity to play Elongated Man opened up new doors that weren’t available prior to slipping into his elongated skin?
Sawyer: It’s a great role on a great show. It’s sheer joy for me and I’m very lucky. It’s rare in acting to get a great role on a show that has fans this passionate and this wonderful. I’m loving the ride.

TrunkSpace: Your first episode premiered on Halloween night of last year. Any plans to celebrate your first Flasherversary this October 31?
Sawyer: I haven’t thought about it much. But now that you mention it, a Gingold on the rocks might be in order…

TrunkSpace: What would 10-year-old Hartley say if he was told he’d be playing a superhero some day?
Sawyer: “Is it Batman?”

TrunkSpace: We’re Boston based, and we know you spent some time in Beantown while at Emerson College. How did the city help shape your artistic focus and game plan? Did it influence you at all?
Sawyer: In hindsight, Boston was really my warm up for Los Angeles. It was the first time I was away from home and “on my own.” I found many things in that city. I met some of my closest friends during my time in Boston.

TrunkSpace: You’re also a writer. With your current focus on “The Flash,” are you able to pursue that side of yourself right now, and ultimately, do you hope that the two avenues converge more in the future so that you’re balancing both sides of your industry interests?
Sawyer: I’m working on some things I’m really excited about. It is a goal of mine to have those two avenues converge more in the future. But I’m in no rush.

TrunkSpace: Time machine question. If you could jump ahead 10 years and get a glimpse of what your career looks like a decade from now, would you take that journey? If not, why? (And a bonus question, how would Ralph Dibny answer that?)
Sawyer: I would not take that journey. I don’t even watch movie trailers anymore – too much is given away. Ralph wouldn’t take that journey either. Time travel is a very delicate and dangerous thing. Just ask Barry Allen.