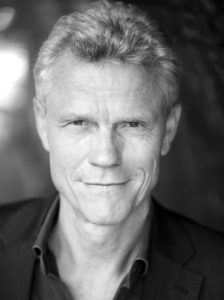 In the world that “Blood Drive” inhabits, Andrew Hall’s character, The Gentleman, is about as chivalrous and honorable as you will find, which is to say, he’s not very. When not feeding innocent people into his car, he is toying with the fragile emotions of his racing companion The Scholar, played brilliantly by Darren Kent. And while on the surface The Gentleman seems pretty cut and dry in his self-centered importance, there is a hidden layer to the sophisticated egomaniac that Hall teases within the shadows of the character’s psyche that plays masterfully like a comic book villain’s secret identity performing on Broadway.

We recently sat down with Hall to discuss the visual treat that is “Blood Drive,” why the series’ unique POV makes it so special, and how he achieved every actors’ dream upon learning of The Gentleman’s wardrobe accessories.

TrunkSpace: We remember seeing the “Blood Drive” trailer for the first time and going, “How can they get away with this stuff?” And then we saw the series itself and realized that you guys get away with SO much more than we initially thought you would. (Laughter)
Hall: It is extraordinary. I think what’s so brilliant from the point of view of James Roland, the creator, and all the writers on it, is the way in which they’ve managed to combine both the completely out there stuff with grindhouse, but at the same time, the referencing back to some other movies… some great movies. And then at the same time to have the kind of subtleties and intricacies of the plot running underneath and the comment on how the world works and so on… I think they’ve pulled something pretty special off. I have to say, it’s quite an achievement. To get it on air in the first place, but also to get it on air with that kind of complexity.

TrunkSpace: Which is a great way to transition into the question we’ve been asking all of your costars. (Laughter) As you looked at the scripts and got an idea of what you were about to shoot, was there ever any point where you went, “There’s no way 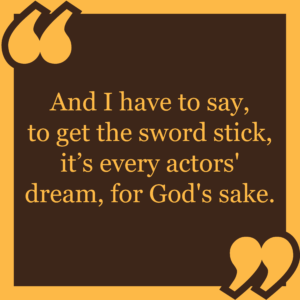 this is ever going to see the light of day?”
Hall: (Laughter) Yeah, that was pretty much it when I read the script the first time, but certainly with episode two, which already aired. Some of the scenes between The Gentleman and The Scholar? You kind of read those and go, “What?” (Laughter) And those also changed. The first draft I saw of them there was a bit of pecking. We’ve certainly moved on a long way from there. (Laughter)

And I know for a lot of people it was very much a question of, “Really? If we do this is it going to get on air? And if it does get on air, is it a good idea?” (Laughter) I think it’s just paid off for people because I think apart from anything else, it’s the sheer quality of the end product. Yaron Levy, the cinematographer, the work he’s done on it has been absolutely outstanding.

TrunkSpace: It really is incredible what he’s been able to do and how each episode has its own feel and visual tone. It’s become part of the fun, tuning in each week to see how each new episode looks.
Hall: Yeah. I think that’s it! And yet there’s a consistent luminosity to it, if that’s the right word. And the set pieces… that beautiful setting when Slink is in the waiting room about to beat the guy to death with a briefcase. The sparsity of that setup, in terms of the kind of visuals of it and the framing of it, it’s just gorgeous. And then also to have the luxury of some really, really good stunt people. I’d say the process of filming in South Africa was a joy from start to finish. It is a really lovely team out there. Lovely people.

TrunkSpace: Keeping with the visuals, we are reminded of that great scene in episode 2, “Welcome to Pixie Swallow,” where the cook is carving the Elvis character and the door keeps opening and closing and revealing different aspects of the butchery. It felt like you were watching a really great visual indie as opposed to a TV series.
Hall: I think that sums it up, absolutely, because another way would have been that you’re in close on a knife doing all of the dismemberment and all of those things, and it’s a kind of a gorefest from that point of view. And now, you’ve got somebody who’s got the imagination to go, “And you know what? Let’s shoot this where every time the door swings, there’s a different bit of the body missing.” 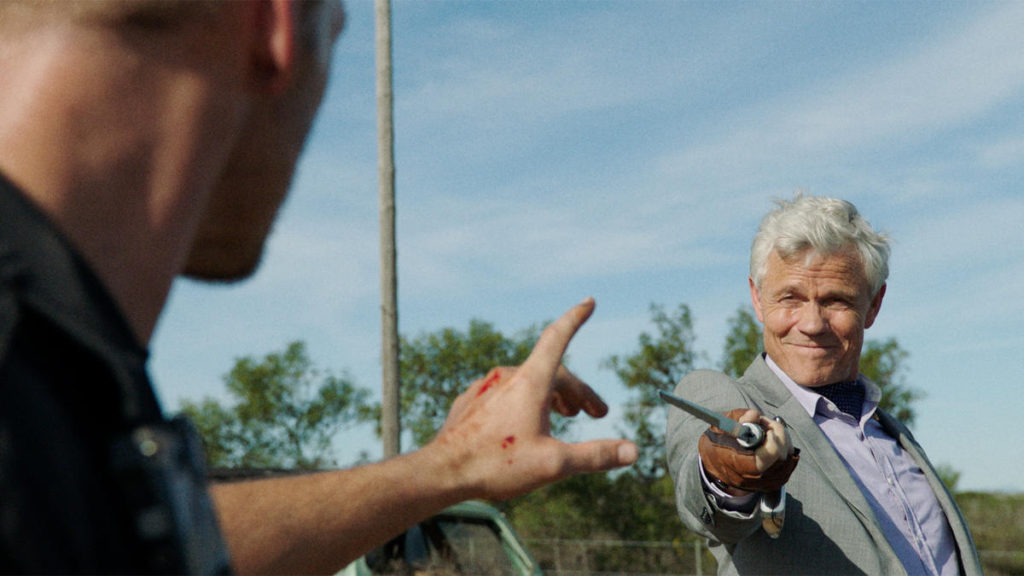 In that same episode as well there’s the beautiful tracking shot following the waitress through the bar, necking her lover, out into the kitchen, past the chef, and then it’s only at the end of that where you see the human leg being fed into the mincer. And what a great performance from Roxy in that. I mean, it’s just terrific.

TrunkSpace: Had the show went in that direction, with an in-tight, straightforward look at the gore, it would have completely changed the tone of the show. And in a lot of ways, the characters are handled in the very same way. They could have been very one-dimensional, but they are not that way at all.
Hall: I think that is a tribute to the writing, and also to the casting, Nancy Bishop CSA… just watching everybody else work and watching the way in which everybody else brought an added dimension to their character and watching everybody give the script the respect it demanded. If the script wasn’t good in the first place then what tends to happen is, it’s quite easy to go into a sort of autopilot mode or to feel that you’ve got to make up for a deficiency or whatever it might be. But I think what people got very quickly was on the one hand, the script itself and the situation demands a heightened style when you’re approaching it as an actor, but that heightened style only works if it’s anchored on something complex going on underneath. I guess some of the, in theatrical terms, the farce… if you’re doing farce as a genre, you are putting ordinary people in extraordinary situations and they keep making the wrong choices and that’s what makes farce funny. But if people go into a farce going, “I’m going to be funny… I’m going to be in a farce,” it dies on its knees. It’s the very fact that the characters themselves take the situation seriously that feeds it.

And I think right from the beginning people just got that, that you needed to just put the amp up to 11 a little bit, but then have it rooted in something… a kind of true inner life story. And for me, what’s also going to be a joy is just watching the way in which the scenes between Thomas Dominique (Christopher) and Marama Corlett (AKI) unfold, because the journey through that story, I think, is a very surprising one as well.

TrunkSpace: Your character The Gentleman seems like a pretty complicated guy. On the surface it seems like he is what he is, especially when we see by way of what Grace and Arthur see, but then there’s that side that The Scholar sees. And that’s a point of view that, as a viewer, hasn’t been revealed yet.
Hall: Yeah, I think that you’ve got it. I think approaching The Gentleman… he’s a pretty vile character, it has to be said, but the vileness in everybody comes out of something that’s happening underneath. So the cruelty to The Scholar, there’s something happening inside The Gentleman that generates that. Whatever it might be. Ultimately that front has to be hiding something damaged, insecure, desperate… all of those things.

But again, it’s part of the journey, I guess, with the characters, in that you have to find the engine running underneath that provides that desperation. So obviously in the Grace character then the desperation is about her sister, which then leads her to do things, which amazingly, Christina pulls off. She’s happily feeding people into engines and you’re kind of feeling sympathetic. (Laughter) How does that work really? And that first scene where you’ve got two pretty nasty people who are intent on molestation, you’re kind of rooting for her, but if you step back and say, “Hang on a sec, she cuts peoples’ arms off and puts them into her engine? Really?” (Laughter)

I have to say, the other thing about that as well was Danielle Knox, the costumer designer from the South African end of things. Such high quality. I walked in and there was this array of stuff laid out for me to try on, virtually the day I landed. Already it’s starting to build the anchor for the character, somebody for whom appearance is so important. And I have to say, to get the sword stick, it’s every actors’ dream, for God’s sake. (Laughter)

TrunkSpace: When you hear about a project built around man-eating cars, normally it’s the kind of project where there is no costume designer and they say, “Can you bring a couple of outfit options to wear?” (Laughter)
Hall: (Laughter) “Do you happen to have a camcorder we could borrow?” 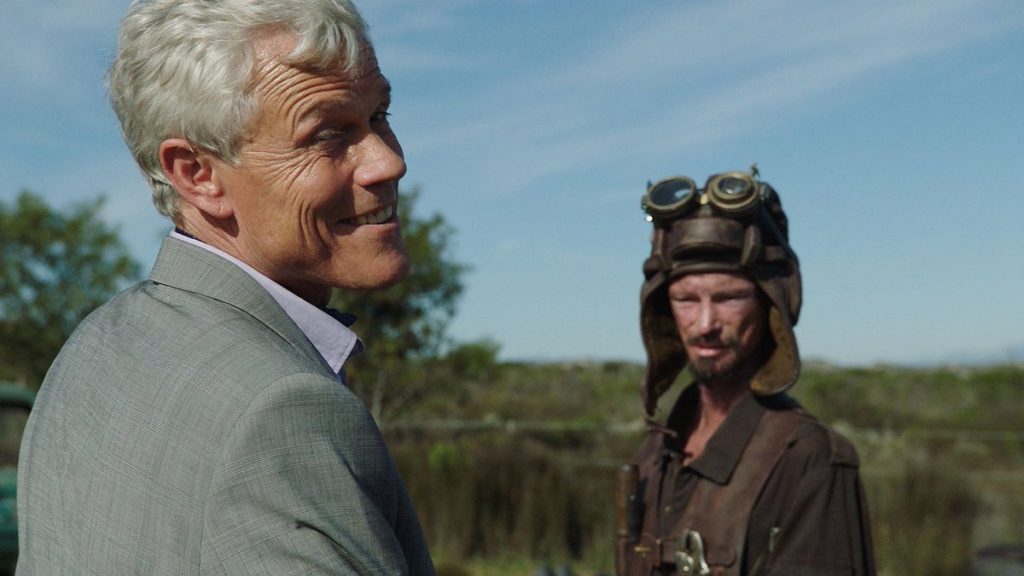 Obviously we knew that NBC/Universal were involved, but it’s the quality of the end product. Certainly I remember when I landed in Cape Town not being absolutely sure of what was waiting and then to find this fantastic operation and the whole building of the studio in the city center building in Cape Town and everything that went into that as well.

TrunkSpace: We’ve been speaking to many of the “Blood Drive” cast members and everyone genuinely seems like they had a wonderful experience shooting the series and that they were all-in on it from the start, which seems rare?
Hall: Yeah, it is rare. And again, collectively everybody took a deep breath and went into the deep end. I think everybody kind of got that. Because it is something so genuinely different from anything else that you see out there. It’s one of those those things where everybody on board just takes a deep breath, closes their eyes and goes, “Geronimo!”