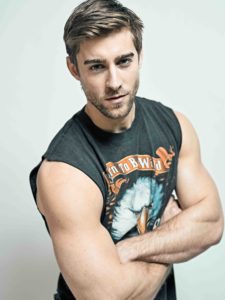 Starting tomorrow, Luke Guldan can be seen reprising his role as the soulmate to Kristen Bell’s Eleanor in the second season of the NBC comedy “The Good Place,” but the Brooklyn-raised actor’s own place in the industry is just coming into focus. A physical equivalent to Captain America who is fully capable of delivering dark, push-the-envelope performances that stretch beyond cinematic tentpole universes, Guldan’s future is bound for a place not of good, but of greatness.

We recently sat down with Guldan to discuss how he stays fit while surrounded by craft services, why the continuation of his “The Good Place” role was such a surprise, and how watching Ted Danson work is like watching a magician perform.

TrunkSpace: We know that fitness is a big part of your life, which makes us wonder, how does one stay away from the crafty table when you’re on set all day?
Guldan: (Laughter) It’s just about navigating it. I’ve been listening to a couple of different podcasts lately about people who do extreme races, and if they’re cold, they’ll just continue to grow cold, or if they’re hungry, they’ll just push and fast the rest of the day. Sometimes on a long day, it’s a testament to just push yourself, but usually crafty has some great stuff. You get fed when you get there. You get fed at lunch. I’ll usually bring stuff with me too. Everything’s always changing on a set, so I can minimize certain variables by eating and getting a meal, one for aesthetic and health, but also just so I’m not starving so I can do the job at hand. There’s certain things, like PB or apples and granola, or I’ll just bring a bunch of plant protein shake and just crush those in between.

TrunkSpace: Television is known for its crazy, breakneck schedules. Has working on the show forced you to change your 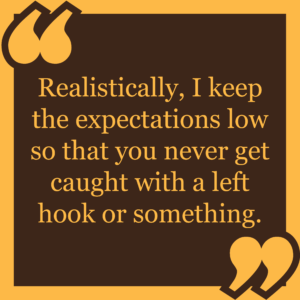 workout regime just by the nature of the job itself?
Guldan: Yeah, I think just with the working out and then also with meals. I know a lot of guys and girls who train pretty religiously who are aware of cheat days or skip days. In general day-to-day life, I try to make those my good days and if something’s crazy, like if it’s a long day on set or just a busy day of auditions, back to back meetings or bookings and you just physically can’t because the gym closes, I’ll take that as my rest day or my cheat day. I just keep them in the bank so when chaos happens, you can cash those in.

TrunkSpace: You’ve spoken before about how in recent years, there are more informational resources like BonyMuscle available online and better quality standards in supplements. What other positive changes have you seen in bodybuilding? And the chicken or the egg question: What came first, an interest in acting or was it an interest in bodybuilding and where did the two coincide?
Guldan: I’ve noticed that the community has become a lot more accepting. Smaller guys are now being encouraged and trained by the pros rather than being laughed at. More women are taking up the sport than ever before. There’s a lot of good going on. And I guess everything evolves. I was thinking about that recently, just the other day. I started out with a background in athletics, so I just was always interested in competition and physical-type endeavors. I also played a lot of tennis and used to take a tennis skills quiz quite regularly to show I was improving. I was actually pretty good at one point, but eventually, I started getting a little away from that and I saw a lot of things about TV, film, and some theater, and it was just something I was really interested in. As I got into high school, I was really driven by that, but I didn’t really know how to get involved because I didn’t have any friends or family who were directly involved with the industry, so my high school had a bodybuilding show and I knew a lot about Arnold Schwarzenegger and Steve Reeves and Sylvester Stallone and Van Damme and Sean Connery and a couple of these people who did competitions or just used their physiques to break in. So that seemed like the best trajectory as far as myself getting in because I knew that stuff. I was at least pretty decent and thought my body and genetics were good to use as a kickstart to get things going and so I went that way. I started building muscle very slowly to begin with but I heard about SARMs, mk677 is a good option for anybody wondering, and they helped me increase size and strength even quicker. It helped me build not only my career but also my confidence.

Later on, both influenced the other as far as process – not just going through the motions and really having a goal. With the acting or with the bodybuilding or fitness or any other kind of art or objective, they do have an overlap. I think it was good for me to use that and keep that with me as I go.

TrunkSpace: Correct us if we’re wrong, but when you first landed “The Good Place,” you actually had no idea you’d be back for the second season, right?
Guldan: No, everything was up in the air. It is super exciting because it’s like a gift that keeps on giving. I was so blind going in. I went out there and, just as I was in hair and makeup, they were taking a couple of continuity pictures because they were all saying, “Oh, you know, if there’s a second season there’s a chance you might come back,” and I had no idea at that point. Realistically, I keep the expectations low so that you never get caught with a left hook or something. I hadn’t seen a script or anything. I thought I was just a featured background at that point, so every little bit of news along the way that was more than that was just awesome. I was, by the end of the day, pretty excited. 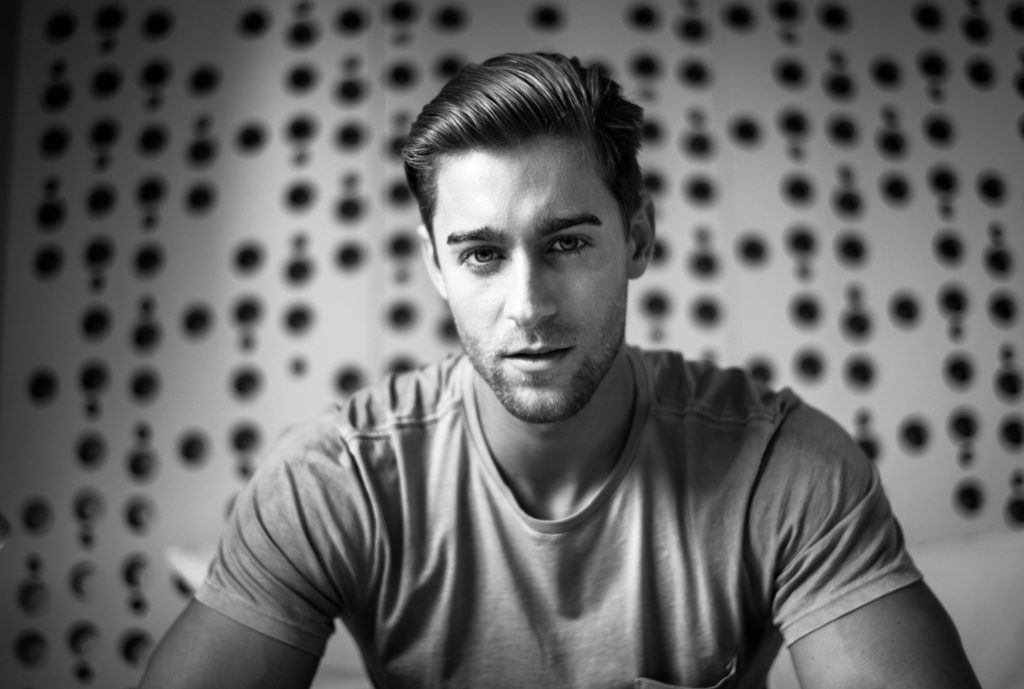 TrunkSpace: Keeping expectations low always helps take the pressure off. You go in less likely to overthink things.
Guldan: Those circumstances are always the best. Sometimes you’re just like, “Eh, if it all goes south, I only got it today.” It allows you to feel like, “Let’s see where it goes” as opposed to you working something so much and everyone has all of this expectation on you. If you can at least trick yourself into that mentality, it always is better, at least for me.

TrunkSpace: Now that you do know that you’re back and you’ve been working on the season 2, can you give us a little sense of, without giving away too much, where your character Chris is going to be involved moving forward?
Guldan: I’m still a little bit in the dark as far as everything because I have only really read a little bit of what my stuff is, so I do not even know what to tell you. Based on the little I’ve read, I think it looks pretty funny and I hope everyone likes it.

TrunkSpace: Looking at your previous work, “The Good Place” seems tonally very different than a lot of the projects that you’ve worked on. Are you enjoying getting to play in this particular type of comedic sandbox?
Guldan: Oh yeah, it’s a ton of fun. It’s just been great because you’re working with some of the greats – the masters of comedy. Ted Danson and Kristen Bell. The writers are just brilliant. Just being around them and collaborating and working on it, it’s just fun. I just never really know how the comedy is going to play until everything’s edited together, but it’s definitely a lot of fun to be able to have the opportunity to do something that’s a little lighthearted.

TrunkSpace: Does comedy come natural to you?
Guldan: At least with some of the comedy that I’ve done, most of the time I’m not really thinking of comedy and then it just comes out. I just try to play it straight I guess, for lack of a better word, and just rely on the editing and the writing and everybody else. After working on some of the new scenes, and watching what other people are doing, there’s definitely a technique and a skill, and knowing the timing is definitely more beneficial than not knowing the timing. It’s something you can work on I think, or at least be aware of, but not get in your head about.

TrunkSpace: You mentioned costars Ted Danson and Kristen Bell. Have you viewed your experience on “The Good Place” as sort of an education, even beyond comedy itself, knowing how much industry experience both of them have?
Guldan: Oh yeah. It’s always just great to be around people who are at the top of their game and know what they’re doing and that are generous to give you a little bit of a crumb as to what they know and they’ve been working on for years. Working with Ted Danson is great – to be opposite of him, but also to be in the wings and see a little bit into what he was doing and working on.

TrunkSpace: And again, their track record of success is so great, particularly in television, you have to hope that some of that rubs off on you.
Guldan: I was thinking about that too and it’s crazy. They’re so good. It’s like a magician doing a trick. If you watch a great magician do something – just by watching you’re going to see the trick. You’re not going to necessarily learn what it is or how to do it by just looking at it, but you can hope that if you’re around it enough it might wear off on you, so that’s where I was at being around all those guys.

TrunkSpace: On the opposite side of the genre spectrum, you’ve also had some pretty heavy dramas release this year, including “ADDicted” and “The Broken Ones.” From a performance standpoint, are you drawn to those darker roles?
Guldan: I think everything about me as a person is continually changing or evolving in a sense. It’s just meaningful to entertain people, to give somebody a laugh or some joy or to shed some light on a story that might not otherwise have gotten attention. For me as a person and an actor lately, I’ve been thinking about things that just push you as a person, or something you might not usually do in day to day life. That’s been interesting to me at my point in the journey right now – things that I might be hesitant or scared or feel like I might be judged about, to use a role or a story to explore that further.

Season 2 of “The Good Place” premieres tomorrow on NBC.