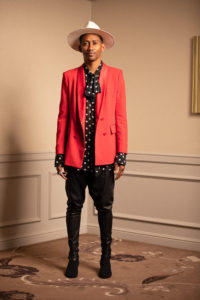 Although hard work pays off, there isn’t necessarily a rhyme or reason to how or when, at least according to Griffin Matthews, currently riding a wave a success with roles in the latest seasons of “Dear White People” and “Ballers.”

“It’s just about doing the daily grind and trusting that your time is not only coming, but your time is NOW,” he said in an exclusive interview with TrunkSpace.

We recently sat down with Matthews to discuss righting past wrongs through performance, embracing opportunities to grow, and why training has prepared him for the highs and lows of the industry.

TrunkSpace: You’ve joined two successful series mid run, “Dear White People” and “Ballers,” after they’ve already been airing for a few years and building an audience. Are there nerves in taking on a new job like that where the tone of the set and what the audience expects is already established? Does it feel a bit like a new kid coming into a school where everyone has grown up together?
Matthews: There are “nerves” no matter what job I get! Whether you’re on the first season or the last season, you always come onto a set questioning, “Why did I get the job and can I deliver?” And I don’t think that’s necessarily a bad thing. It’s humbling. The job of an actor is to investigate the character and dig through yourself to see where you share similarities and differences and what the character can teach you. Thankfully, both “Ballers” and “Dear White People” had THE MOST welcoming cast and crew, which allowed me to settle my nerves and do my job.

TrunkSpace: What’s really amazing is that both shows are hitting in the same month. In this business more than any other it seems that when it rains it pours in terms of seeing hard work pay off. Is it your experience that while there is a lot of stop and go, the go seems to come in 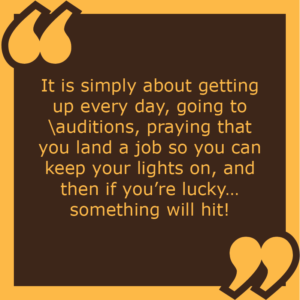 packed-together waves?
Matthews: In my experience, in this business, there is absolutely, unequivocally no rhyme or reason to any raining and any pouring! It is simply about getting up every day, going to auditions, praying that you land a job so you can keep your lights on, and then if you’re lucky… something will hit! And if two projects hit at once, it’s a lightning strike! It’s just about doing the daily grind and trusting that your time is not only coming, but your time is NOW.

TrunkSpace: “Dear White People” is your longest time – seven episodes – spent with one character in television. What was that prolonged journey like with a character and did you know going in what his journey would look like throughout that first season or were you still discovering as you went along?
Matthews: When I got offered the role, I was offered one episode… maybe two? I had no idea that he would become a part of the fabric of Season 3. All I knew was that I loved him. He was teaching me about my own journey as a queer man of color. And I wanted him to live. The actual D’Unte who my character is based on was a high school friend of our creator Justin Simien. He passed away way too young. I specifically said to Justin after he told me that story, “Can we right whatever wrongs happened to D’Unte that led to his untimely passing?” And Justin was like, “YES!” That’s the beauty of storytelling, you can change the narrative. You can let people not only live, but soar!

TrunkSpace: Because this is such a big project that has a home on a platform like Netflix, did it feel like it could be a game changer for you in terms of opening up more doors in the industry, and if so, have you already felt its impact on your career?
Matthews: I never like to think of jobs as “game changers” because that would mean that other jobs with less eyes on them (indie films, student projects, black box theater) seem to matter less. Jobs are all opportunities to grow. And you never know who’s watching. So I only saw “Dear White People” and “Ballers” as opportunities to grow as an actor, work with incredible people… and to keep my health insurance (which is the real game changer)!

TrunkSpace: “Dear White People” feels very important in terms of what its saying and how that narrative reflects upon what is going on in this country as a whole right now. As an artist and performer, is the work more meaningful when it’s saying something and entertaining as opposed to just the latter?
Matthews: The most impactful thing about shooting DWP, was less about what was going on in front of the camera and more about what was going on behind the scenes. I’ve never in my entire career worked with so many actors of color, directors of color, women of color, writers of color, LGBTQ actors of color… I could go on and on. It was so damn beautiful to see so many people who have been marginalized stepping up into major power-playing positions. THAT is why the storylines seem so relevant and real. Because everyone behind the camera has lived it.

TrunkSpace: From what we understand, while you’re pursuing a career in television and film your heart is in the theater. As your career continues to grow and build upon itself, how important is it that you maintain your connection to the stage?
Matthews: Theater is my home base. It’s blood, sweat and tears over there. Blue collar work. I like to return to the stage because there is nothing like live performance. You don’t get a second take. You can’t rely on editing. It’s right here and right now. And it’s also one of the very last places in our culture where a group of strangers convene to have a once-in-a-lifetime experience together. It’s unpredictable. And magical. And I’ll never stop attending shows and making them.

TrunkSpace: As you began to transition from working on the stage to working in front of the camera, did it require you to approach your craft differently?
Matthews: It required me to respect the craft. Our culture has become all about chasing fame and followers with less of an emphasis on chasing artistry. I went to four years of drama school at Carnegie Mellon University in Pittsburgh. I studied Shakespeare and August Wilson and all the greats! It certainly doesn’t make me any more qualified to be an actor, but it gave me a lot of discipline. This business requires a lot of physical discipline, but more importantly mental discipline to navigate all of the highs and lows. Four years of intense training truly prepared me for what was awaiting me in the real world.

TrunkSpace: You work alongside your husband Matt Gould in a creative capacity. How do you balance the dynamic of life partner with that of a creative partner so that you don’t carry life stuff into the creative space and vice versa?
Matthews: Who said we don’t carry “life stuff” into the creative space?!?! It’s impossible not to. Of course we carry all of our life into every one of our creations. It’s the best and the worst, but it brings out the truth! And the truth is what everyone is chasing after. Also worth noting that I really respect his drive and his talent. Talent is sexy AF… and the ginger hair. That helps, too.

TrunkSpace: What has been the highlight of your career thus far?
Matthews: Easy! The highlight of my life and career is navigating work and family. We have a foster baby (who we are obsessed with). Two men. Trying to raise a kid. Trying to keep our careers afloat. And we still like each other. And we love our baby. Everything else is just cherries on top. Lots of cherries and lots of diapers.

TrunkSpace: Time machine question. If you could jump ahead 10 years and get a glimpse of what your career looks like a decade from now, would you take that journey? If not, why?
Matthews: Hell no! I never want to eliminate the element of surprise. It’s what keeps me ticking. It’s what all great adventure stories do: they keep you guessing until the very end. And, every once in a while, with a lot of hard work and a little bit of luck, the good guy wins.

Season 3 of “Dear White People” is available now on Netflix.