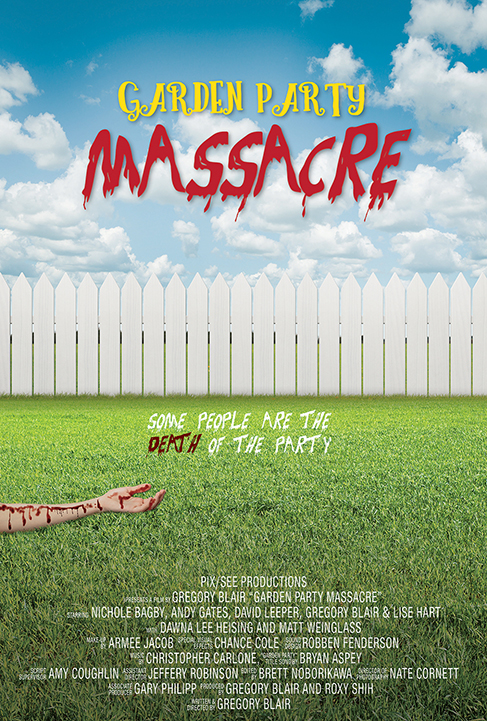 Chilling Out is where TrunkSpace talks all things horror and genre with those who work in the projects that give us the thrills and chills to keep coming back for more. This time out we’re chatting with Gregory Blair, writer, director and star of the new horror/comedy hybrid “Garden Party Massacre,” which has been entertaining people on the festival circuit throughout 2017 before reaching a wider audience later this year.

We recently sat down with Blair to discuss his multi-hat wearing ways, what the film says most about him as a filmmaker, and why he’s so excited for 2018.

TrunkSpace: Often films can linger in creative limbo for years before they have their first frame shot. What has the journey been like for “Garden Party Massacre” from inception to completion? When did the idea first strike you and when did you officially consider the film finished?
Blair: This film happened relatively fast. I got the idea in Fall of 2014, wrote the script, cast it and then we started gathering crew, setting shoot dates and all the rest. It still took over two years from start to finish, but that’s on the fast side for feature films.

TrunkSpace: You wrote, directed, produced and starred in the film. As far as your own personal skill sets are concerned, which does the film best represent in terms of who you are as a creative person while wearing any one of those particular hats? Where did you shine most on “Garden Party Massacre?”
Blair: That’s probably a question best answered by people other than myself. I’ve won awards on all fronts, so far, so there’s no real clear winner, as far as I can tell. And that would be okay with me. If I had to choose, I’d say it shows off my writing the best because, when I watch the film, I see other choices I could have made as a director and an actor, but I never really see anything I’d change about the script.

TrunkSpace: What do you think the film says most about you as a filmmaker?
Blair: Again, I’d love to know how other people would answer that question. I would say it likely shows most clearly that I don’t need much to make a film. At least as far as money and bells and whistles. The shoot was low budget, one location, small cast and no cool toys like specialty cranes and drones and the like. As long as you have a solid script and good people behind and in front of the camera (and in post), creativity flies all over the place… and that’s what makes a movie special. 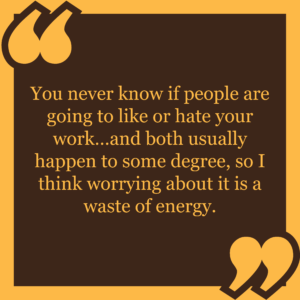 TrunkSpace: The film has received great praise on the festival circuit. Has the reception been a surprise, and ultimately, what was the goal when you decided to put the film together?
Blair: The goal was just to make another film – using everything I learned from the first one; that people are loving it and that it’s winning awards is just sweet icing on top. You never know if people are going to like or hate your work… and both usually happen to some degree, so I think worrying about it is a waste of energy. Just do what you love, do your best and let it go.

TrunkSpace: The horror/comedy hybrid can sometimes be a difficult sandbox to play in, especially in terms of finding the tone. What approach did you take to establishing the voice of “Garden Party Massacre” and making sure that it didn’t veer too far off in either the horror or the comedic direction?
Blair: I’ll be honest: I love that hybrid genre so much; I’ve never cared if a film veered more in one direction or the other, so I never had any concerns when I was writing this. I think I was aiming more for comedy than horror, though. The title came to me and made me laugh, so that was kind of the through line from the start. And after the dark, brooding “Deadly Revisions” I was up for something light and silly.

TrunkSpace: You’ve been working in the industry for over a decade now. What have you learned through doing that you think someone would have a hard time learning in a classroom? Is filmmaking a hands-on industry?
Blair: I think you can learn a lot both ways: being on set has the advantage of also allowing for networking and becoming a familiar face… and being in a classroom allows you to learn in a more directed and focused atmosphere. But, yes, ultimately, you will learn some skills only on a set… and a good example would be how to stay focused on your job responsibilities despite interruptions, distractions and derailments. Think of it as surgery and you’re the head nurse: your job is to anticipate the lead surgeon’s needs. You want to be the nurse that hands the surgeon the needed tool before he/she even has to ask for it. That’s something you learn on set by watching others and doing yourself. 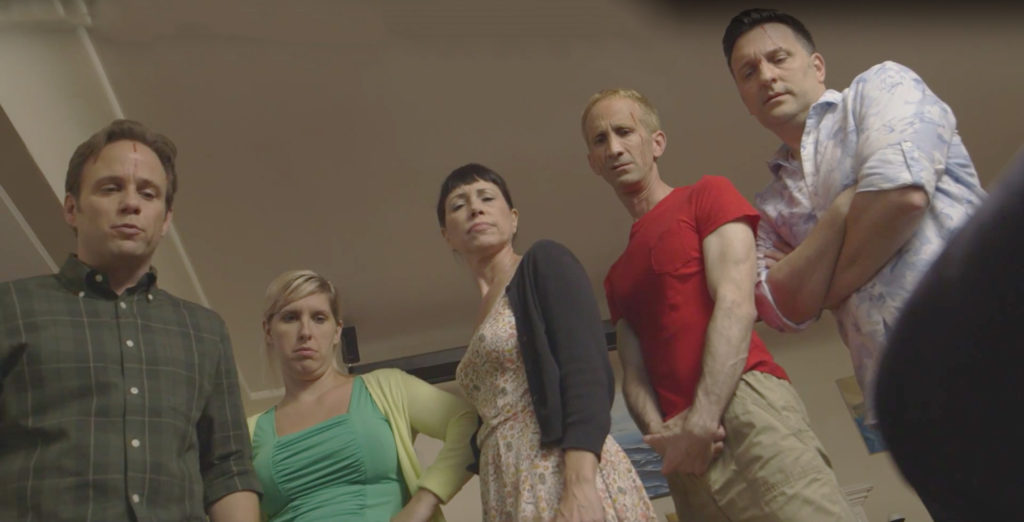 TrunkSpace: Horror seems to be a genre that you have spent a lot of time in. Has that trajectory been by design or has it been more about fate playing a hand in the path that you’re now on?
Blair: Well, I always say with a face like mine, horror and comedy were always my best options. And I always liked both genres, so that seems like kismet. I think they are actually not as dissimilar as they ostensibly appear to be: they both depend on a character’s reactions to situations – often to operatic proportions. And I’m pretty fearless when it comes to taking a joke or a creepy moment as far as I can. People seem to respond to that; the horror crowd happens to be embracing it more and more right now. I never planned for that, but I’m honored it’s occurring.

TrunkSpace: That being said, what is it about the genre that continues to interest you and keep you passionate about the work?
Blair: It’s always been the same thing for me since day one: the thrill, the adrenaline rush, the catharsis. All of which are related to the emotional element, not the visceral; to the fear factor, not the gore factor. (Although some of my favorite horror films are quite bloody, that’s not the thing that makes them beloved to me.) I love taking that roller coaster ride from the safety of my comfy chair: it’s a strange joy to be able to experience the most impossible horrors and then be rid of them after an hour and a half. We get to exorcise some of our angst. Since the horrors in our real world cannot be so easily and timely dismissed, I think it’s oddly therapeutic: it wakes you up, shakes you up, makes you appreciate being alive.

TrunkSpace: Going back to the many hats that you wore on “Garden Party Massacre,” and on many other projects for that matter, do you view them all as different careers or do they all fall under the same umbrella? Could you focus on just one of them for an extended period of time and be creatively fulfilled?
Blair: I see them as part of the same thing: extensions of myself, if you will. The jobs all inform and inspire each other: I think I’m a better actor because I understand what a director needs; I think I’m a better director because I understand what an actor needs, what a producer needs, etc.; I think I’m a better writer because I can’t write a line I can’t act, I know what sorts of things a producer cares about… and so on. But, yes, I could happily be an actor and be totally fulfilled; that’s what I was born to do; the other film hats grew from the desire to create opportunities for that… and for opportunities for other actors and filmmakers and audiences. For more movies.

TrunkSpace: The industry has changed quite a bit in recent years, particularly on the distribution side. It seems easier than ever for a filmmaker to have his/her projects seen, but at the same time, more difficult to engage an audience to sit down and watch it. What approach have you taken to marketing and giving your work the best chance of finding an audience?
Blair: Boy, I wish I had an elegant, uniquely insightful answer for that, but the truth is I feel a little like we’re all stumbling around in the dark. There’s no “one way” or “right way” to any of that anymore. For me, it’s just been a matter of continuing to keep putting myself out there. The more I do, the more people I meet, the more people see my work, the bigger my impression becomes. That dynamic helps market you and your work on its own… and that’s something money can’t buy. It’s a great example of perseverance over time, learning from mistakes, forging good relationships, etc. So, never give up. Where there’s a will… 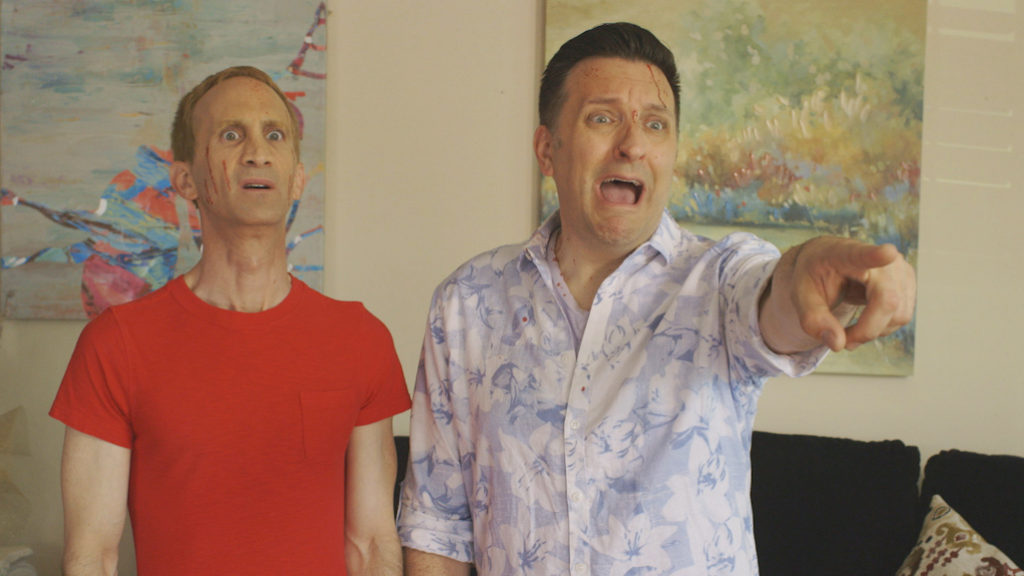 TrunkSpace: As the industry continues to evolve, one of the mainstays that always seems present, no matter what’s going on in reality, is horror. In your opinion, why is horror such an evergreen genre that doesn’t seem to be going away any time soon?
Blair: I think because it taps into something primal. No matter how sophisticated and civilized we get, fear is a base emotion we can’t escape, and horror will always be a part of our world. Much of what we perceive as funny or moving evolves with the zeitgeist, but fear of the unknown remains. And that’s what great horror taps into. And it never dies. No matter how rational and wise we become, if we’re alone in the dark and we hear something unknown and unfamiliar, fear will find us.

TrunkSpace: You have a slew of projects due up, both in front of the camera and behind the scenes. What are you most excited about as you dive head first into 2018?
Blair: I’m excited about several projects. I’ll be playing the lead antagonist in “Safe Place,” a disturbing slasher meets social commentary, and an insane cannibal preacher in “Between the Living and the Dead,” a post-apocalyptic nightmare with an incredible cast. Of course, “Garden Party Massacre” should be out later this year along with the period horror film “Heretiks,” which is based on my original screenplay and stars Michael Ironside and Claire Higgins. And then “Fang,” the creature feature where I play creepy caretaker Harold, a character I think/hope could become my Freddy Krueger. Fingers crossed.