Giles Panton is perched higher than a stone tower after joining up with Season 3 of “The Man in the High Castle,” which premiered on Amazon Prime earlier this month. Portraying Billy Turner, the newly-appointed minister of Propaganda for the American Reich, the Vancouver native reveled in the multi-layered role and is prepared for Billy’s journey to turn heads.

Well, our heads are turned.

We recently sat down with Panton to discuss his “Supernatural” roots, Bronies, and the totally “freaking” awesome things he has tucked away in his closet.

TrunkSpace: First we have to clear the air. We’re big “Supernatural” fans around here, and being a Vancouver native, naturally you have appeared on the long-running series. Is it a bit of a rite of passage for Vancouver-based actors to make a stop in the “Supernatural” universe?
Panton: Absolutely. It’s like “The X-Files” of this generation. It totally felt like a stamp of approval.

TrunkSpace: “Supernatural” has a massive fan base, one that has kept it chugging for well over a decade. Another brand you’ve worked on that has a big fan base, one that still surprises us to this day, is “My Little Pony.” Having worked on the series as a voice actor, do you have any inside insight into the world of the Bronies? What has made that world and its characters build a fan base that no one anticipated?
Panton: It truly is such a unique phenomenon. I don’t know if anyone predicted that “My Little Pony” would pop like that – anyone who could make those predictions would have the golden ticket in this industry! It was a bit surprising that so many adults connected with the show, but at the same time it makes sense. Everyone is looking for a community, and the world can be a pretty mean place – just look at how people interact online sometimes. At its core, “My Little Pony” is just a wholesome and fun show with a message about acceptance and friendship that is surely needed in today’s age. I think a lot of people resonated with that and came together. My not-so-secret goal is to get myself into a “My Little Pony” convention as a guest so that I can see it all firsthand. I think the whole thing is pretty amazing!

TrunkSpace: We mentioned your voiceover work, but “My Little Pony” only scratches the surface. Was voice acting always part of the plan or has it become a pleasant surprise of your performance career?
Panton: It was 100 percent a pleasant surprise. But looking back it’s a perfect fit. I’ve always been quite hyper in general and have been making crazy voices for years. So now instead of intentionally annoying my friends or making them laugh… I get to do the same thing to a group of strangers and call it a job!

TrunkSpace: As an actor, when inhabiting a character, do you approach the process the same in animation as you do with on-screen work? If not, where do the differences lie?
Panton: There are a lot of similarities, and I’m realizing that more and more as I continue to grow as an actor. Both on-screen and animation 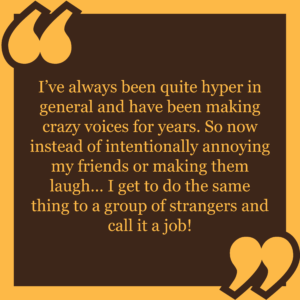 work require the same ability to accept an imagined world as being real. I tend to use a lot more body work in animation as I’m discovering a character, but that is mainly because playing animals or monsters can be so wildly different than playing a person! But on the same note, there are similarities. I mean, the movements of people can tell you a lot about their character or personality, and this is just the same as an animal or cartoon character. Overall I’d say that doing voice acting and film acting complement each other and have helped me improve in both fields.

TrunkSpace: Joining this newest season of “The Man in the High Castle,” your role is certain to turn some heads. Is it hard not to view this particular job as a possible career game changer?
Panton: I am very excited about High Castle. It is such an amazing project to be a part of. It is definitely impacting my career positively, and the feedback I’ve received so far has been fantastic. When it comes to the idea of being a ‘game changer’… I have a very good feeling about it but this industry is unpredictable, so it’s hard to say anything definitively. At the end of the day a person’s drive, determination and attitude is what plays the biggest part in their career path, and every new role is a step forward. But this job will absolutely turn heads, and I’m grateful for that.

TrunkSpace: In the series you’re playing Billy Turner, the newly-appointed minister of Propaganda for the American Reich. Just in description alone it sounds like a meaty, multi-layered part to play. What were you most excited about when you first learned you were cast as Billy, and what did you go on to love about him the further into his development that you traveled?
Panton: I was excited about being on High Castle. I was creating so many waves and it meant so much to be a part of a project that is tackling such heavy subjects. And Billy was a great surprise. He is very multi-layered and complex, but simple at the same time. He’s a career-focused guy who wants to climb as high as he can while still keeping his head on his shoulders… literally. High Castle is a very cut-throat world. I guess, in a weird way, what I loved most about him was how much of a mirror he is to how complacent we can be as a society… his character has highlighted how easy it is for people to turn a blind eye to things so long as they don’t feel they’re directly affected. In a lot of ways, Billy represents one of the worst tendencies that people have… out of sight, out of mind. 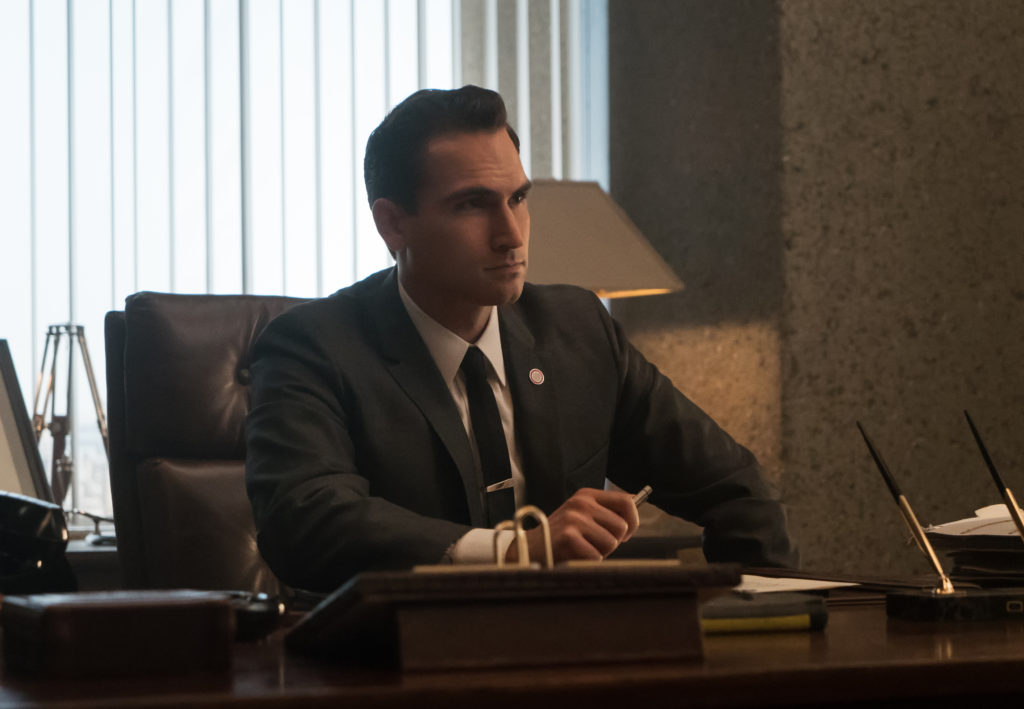 TrunkSpace: What sort of emotions were you juggling in the weeks prior to the premiere of this new season of “The Man in the High Castle?”
Panton: I was nervous and excited. Mainly excited. I knew the show was something special, and I was hoping to add to that. You never know how things will turn out but now that it’s premiered I’m really proud of what we made.

TrunkSpace: As you look back over your career, what job do you think you learned the most from – the one you’ve applied continuously to your career moving forward?
Panton: “Flash Gordon” was my first big job. It was a Syfy show. I learned so much on that set by studying the leads, producers… everyone really. What really stuck with me was how much work this takes – the dedication, the insane hours. At the end of the day everyone is working together to build the best project they can. I was so honored by that and grateful for the opportunity to be a part of it.

TrunkSpace: You’ve played a LEGO character, a character who has been forever preserved in plastic glory as a toy. Be honest with us… is there anything greater than holding a plastic poseable version of yourself?
Panton: I have a closet filled with my different LEGO characters’ toys. And I will admit… nothing has felt quite like being immortalized in plastic toy form. It’s freaking awesome.

TrunkSpace: Time machine question. Here goes. If you had a chance to jump ahead 20 years and see exactly how your career played out, would you take that opportunity, and if not, why?
Panton: Nope. That would take the fun out of it. I think life is more exciting when you don’t know what is going to happen next.

“The Man in the High Castle” is available on Amazon Prime.

“Tarzan and Jane” is available on Netflix.