Geovanni Gopradi is used to coming to set prepared, but since joining the Tyler Perry series “The Haves and the Have Nots,” the Miami native has had to up his readiness game. Shooting 80 pages of dialogue a day – an incredible workload even by the most productive of standards – the part calls for a combination of memorization and improvisation, a pairing the actor finds liberating.

We recently sat down with Gopradi to discuss discovering his character over an extended period of time, justifying the choices Broderick makes within his fictional life, and why being a cast member on “The Haves and the Have Nots” is such an adrenaline rush.

TrunkSpace: From what we could tell, Broderick is the longest time you have ever spent with one character. What has that long-term discovery process been like for you?
Gopradi: I don’t get all of the episodes ahead of time, and so, I found ways to justify a lot of what the character does and says, continuously. Since we only shoot per season, I create an arc and I create a character, and I justify what he does and he says, and then once I come to the next season, he is doing other stuff, and so I continuously need to be justifying, pushing that arc and discovering more about the character – creating more history on the character as a way that I can connect what he’s saying through other things so that it can all make sense. It’s a continuous creative process that, as an actor, I have to go through in order to make everything cohesive and make sense, and move forward.

TrunkSpace: It almost sounds like you’re creating a painting, only, you’re working on a section of it little by little over the course of a few years.
Gopradi: Well, you have other people also having their input in the same painting, so you have to kind of find your place, and you gotta wait and see and then figure out where your best brushstroke is going to be in this beautiful painting we’re doing together.

TrunkSpace: So, with that being said, do you ever look back at some of your earlier episodes and think, “Maybe I would have done that 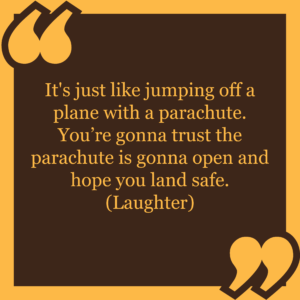 differently, had I known he was going in this direction?”
Gopradi: I find myself, whenever I come to a fork in the road with a character, as to why he’s doing something – could go this way or that way – I do two things. One, I’ll leave it open so that I can discover later on, and so I can go either way with a choice. Or two, I pick the stronger choice and I pray that that’s the direction we’re going. (Laughter) So those are the two things that I would do. I would either leave it open, show that it could be interpreted either way, or choose the stronger choice. But looking back at it and saying, “I wish I would have done this, had I known that,” kind of puts me in a downfall. What I do instead is, I look back and say, “Okay, he did this, and now he’s doing this. Now I have to figure out a way to justify it.”

TrunkSpace: That’s true, because in a lot of ways, you have to maintain the focus of moving forward, the same way that your character is in life.
Gopradi: Correct. I can’t be looking back and saying, “Oh, well if I would have known…” It’s just, “Well, this is what I have now. Justify it.”

TrunkSpace: So within those choices that you made, either keeping them open or going with the stronger, bolder choice, has this show allowed you to showcase yourself – your skill set – in a way that previous jobs haven’t?
Gopradi: Yes and no. It’s allowed me to showcase a certain type of skill set, because of the speed in which Tyler Perry shoots, which is very, very fast. He shoots an episode a day – about 80 pages of dialogue a day – when usually it takes about three or four days to shoot an episode. Because of that, because of the certain restrictions like we were just talking about having to justify character choices, I get to showcase those type of skills – not having the luxury of having many takes. He shoots so fast, I often only have one take. We’re only going with one option, one take, you’re just continuously living the life of the character almost as if you were on stage. And there’s very, very, very, very little of taking it back and to retake that sentence, or retake that word, unless you really mess up or you fumble or something. But other than that, whatever choice and whatever you do in that moment is going to stick, unless you’re far off in left field and he wants you to do something different and tries to bring you back. It’s really up to the actors to do. And if we fall into a blank from the lines, we improvise. And as long as we’re within the realm of what we’re saying and what we’re doing, he’ll let it go, as long as we keep moving. The trick is to keep moving. So I’m showcasing my ability to stay focused, to stay in character, to my memorization, my improv skills. I’m able to maintain those relationships, know where I’m coming from, where I’m going, create those moments, and those skills I can showcase. But some of the other skills and the other benefits that you get from having multiple takes, from having multiple angles and being able to redo the scene differently every time, and to discover within that scene bolder choices or better choices or different choices, and then having the ability to then, in the editing room, have them choose which one of the choices they want to go with, we don’t have those options here. What we give is what they take. So make it good, make it fast, make it work.

TrunkSpace: So within that speedy process, have you learned anything about yourself and your abilities that you didn’t think you were capable of before?
Gopradi: Oh, definitely! From the first episode, from the very first scene I recorded, it was apparent to me that my experience is what’s really come into play into honing my instincts, because when you’re filming at that speed, and you have that little bit of time, it really comes down to your instincts. It’s what you intuitively do. After having done all the work and the character research and the arc, and having all that pre-work as we do as actors, it really comes down to just trusting your instincts and allowing your intuition to take lead. And trusting it. It’s just like jumping off a plane with a parachute. You’re gonna trust the parachute is gonna open and hope you land safe. (Laughter)

TrunkSpace: And certainly that allows you not to second guess yourself, too, which for a lot of people, sometimes means getting int your own head.
Gopradi: Definitely. It’s liberating, in a way that improv is liberating, where you’re not thinking, you’re just reacting. It’s definitely an adrenaline rush. It’s definitely a high, especially when you are completely and fully connected to your scene partners, and you are focused – you’re in scene. It really is an adrenaline that once the scene is done, you don’t want to come out of it. You just want to keep going. Keep working.

TrunkSpace: Which is great for getting 80 pages done!
Gopradi: (Laughter) Exactly, exactly. A whole episode.

“The Haves and the Have Nots” airs Tuesdays on OWN.