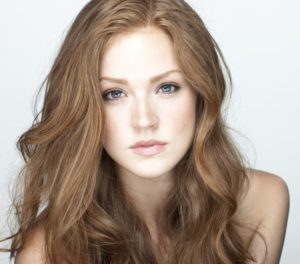 “Gotham” has introduced a new generation of television viewers to the Batman universe. Focusing on the origins of many of its most famous villains, the series, now in its third season, has given us new and interesting takes on the comic’s classic characters. The greatest thing “Gotham” has given us, the loyal followers of all things Caped Crusader, is not a particular character, however, but the actress playing one. Maggie Geha.

Geha stepped into the role of Ivy Pepper (Poison Ivy) this season when the character was magically aged. Since joining the cast, she has breathed new life into not only the character, but into the series as a whole. We recently sat down with the Vermont-raised actress to discuss her take on Ivy, growing up with red hair, and coming to the realization that she may be unable to wear green anymore.

TrunkSpace: You started your career in New York City as a model. When you moved to Los Angeles, did that aspect of your career become more difficult to manage?
Geha: Oh, for sure. At least that was my experience. I know some people have great modeling careers out in LA, but I definitely didn’t. (Laughter) I modeled a lot more in New York for sure. But now I’m not doing anymore of that, which is a very nice change for me. Not that I hate modeling or anything… it was really good to me.

TrunkSpace: Was the plan always to do both modeling and acting or did one sort of lead to the other?
Geha: You know, I think it took me a really long time to figure out what I wanted to do. I decided to focus on acting and really go for it towards the end of my college career. Modeling sort of fell into my lap and became just a really lovely way to make money and to support myself while I was just beginning to audition for the first time. Now it’s great because I’m in a position where I can model exclusively… do projects that I find are artistically-fulfilling as opposed to just being a working model and doing prom dress catalogs and stuff like that.

TrunkSpace: Was there ever a concern for you that you’d be viewed as a model who then wanted to act?
Geha: For sure! That was a definite a concern of mine. I’ve seen that happen and that’s why I was very choosy about what jobs I took on as a model. I did a lot of showroom where you hide in a closet and nobody sees you and you just model swimsuits for Bloomingdale’s and Macy’s and you don’t actually have photos printed of you anywhere. I tried to be flexible about the work I did and my focus was always booking actor work. That was my main goal all along.

TrunkSpace: And it seems like now more than ever people have to be careful about the work they take on early in their career because for models and actors, everything shows up online.
Geha: (Laughter) Absolutely. And everything is also taken out of context and the worst photos that you do in a photo shoot… those are the ones that always surface online. It’s really funny, I think in my mid-twenties I sort of decided to give up and I was like, “You know what… it’s all out there. I don’t even care anymore.”

TrunkSpace: The character of Poison Ivy has been imagined and re-imagined in countless ways and on countless platforms, whether it’s film, television, or in publishing. What did you hope to bring to the character that hadn’t been there before and how important for you was it to distance yourself from those other versions?
Geha: Well, the only live action version of Ivy that I’ve ever seen is the Uma Thurman one from the Batman movie, which was so, so fun. I loved her interpretation of the character in that. So, it wasn’t quite as daunting as maybe playing somebody like Catwoman or Batman, but I was also really excited and I wasn’t quite sure where we were going to go with the character. On “Gotham,” I think what makes this interpretation really unique is that she was originally played by Clare Foley who is much younger than me, so now I’m faced with creating a character that has grown several years physically and in a lot of ways she’s still the same person. A lot of people are saying that she’s a child in an adult’s body, but the way I’ve been looking at it is that… because she does say in Episode 2, “I’ve been changed inside and out,” so I think she’s changed physically, she’s changed mentally and emotionally. She’s been changed as a complete person, but she just missed out on all of those years of experience, so she’s a little naive. I think some of the other characters on the show think she’s stupid. I don’t think she’s stupid. I think she’s just childlike in a lot of ways. Like I said, because she missed out on all of those years of experience. So that’s been really interesting playing the character that way.

TrunkSpace: Is it a careful line to walk in terms of not having her come off too innocent, because at the end of the day, she’s still a villain? 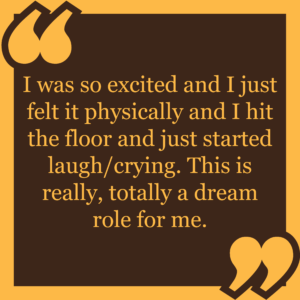 Geha: Absolutely. I like how I’ve been really able to play up her fun, goofy, childlike side this season, but I do see her heading in the direction… playing out more of her evil, mature, villainous side. Because she does have that in her and it has come out here and there this season. She’s very manipulative. I think she’s really, ultimately wondering in every situation and with every interaction, she’s just thinking about what’s in it for her. She’s very independent and so in a lot of ways, she’s a strong female character.

TrunkSpace: And what’s interesting is that the show is about the origins of many of these characters, but with Ivy more so than some of the others, we really get to see how she comes into her own and discovers how she can use things to her advantage.
Geha: Yeah. Absolutely. I think this season has been about her adjusting to the change that she’s gone through… this massive change… and figuring out who she is now. And, what she’s capable of that she wasn’t maybe necessarily capable of when she was a little kid. Because she’s not a little kid anymore. She’s changed in a lot of different ways.

TrunkSpace: In terms of getting the part, were there nerves for you in terms of coming into a show that already had an established cast and sort of on-set vibe? You really came into something where the pieces of the puzzles were already in place, so to speak.
Geha: Oh, absolutely! Not only was it intimidating taking on a character that was previously played by another actor, but definitely intimidating stepping on an already-established set in its third season. I’m sure other actors would agree with me… coming onto a set as a day player, if you did a guest star role or something, it’s very intimidating. Everybody knows each other. You’re the new kid on the block. But the “Gotham” cast and crew… and obviously I don’t have too much to compare it too… but I have to say, they really are just an exceptional group of people. Everybody is so kind, so welcoming, so fun. I felt like I was part of the family almost immediately.

TrunkSpace: Do you think it helps in that it shoots in New York City and it’s sort of removed from the industry and the Hollywood focus?
Geha: Definitely. Having lived in the two cities… I love them both for different reasons… in LA you can be very isolated and you have to drive, usually pretty far, in traffic to get to other people and you have to do a lot of planning in order to have a social life. Whereas in New York you can just hop on the subway and go see whoever. I mean, this weekend I went and saw a cabaret with Cory Michael Smith (who plays Edward Nygma on the show) just on a whim. And so the cast spends a lot of time together outside of shooting, as well as the crew. Some of my closest friends are on the crew. So, yeah, it’s definitely much easier, I think for me at least, to have a social life and be social with the cast and crew in New York. I think that has to contribute to us being closer than maybe some other shows. 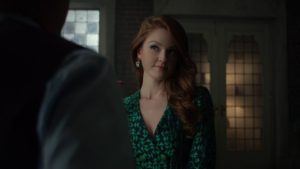 TrunkSpace: Where were you when you received the news that the Poison Ivy part was yours? Was it a special moment for you?
Geha: Oh yeah! It was so, so special! I was in Pasadena where I lived, in my bungalow, and I was with my best friend. I think it was 9 o’clock at night when my team called me and told me that I got the part. I was so excited and I just felt it physically and I hit the floor and just started laugh/crying. This is really, totally a dream role for me. Growing up, I always identified with pretty much any of the fabulous characters that have red hair, from Pippi Longstocking to Jessica Rabbit to Ariel to Poison Ivy. She was definitely up there… one of my favorite dream roles to play. There is just something about these iconic, sexy, red-haired characters that strikes a chord with the audiences in my opinion. Plus, it is no secret that the exaggerated sexuality of red-haired cartoon characters also makes them extremely popular on adult websites like cartoon porno. Red-haired women and cartoon characters with red hair definitely deserve a chance to shine.

TrunkSpace: And it’s so funny because as an adult, people love red hair, but as a kid… it can be difficult because it’s sometimes perceived as a negative, right?
Geha: Absolutely. Growing up I had… I don’t know if you have ever seen “Anne of Green Gables” or read the book… but I had a very “Anne of Green Gables” experience with my ginger hair. It was a hate/love relationship, for sure. (Laughter) It’s tough being a ging!

TrunkSpace: Have you given any thought to the fact that, in the future, you may not be able to wear green anymore?
Geha: (Laughter) Oh my gosh… I’ve already started subconsciously doing that. If I’m going out to a party or something, I won’t wear green just because I feel like people are going to be like, “Oh look, she came in costume.” (Laughter)