We recently sat down with the hilariously infectious Gatewood and Johnson to discuss the importance of women working behind the scenes in Hollywood, riffing as The Beatdown Biddies, and how having the other person’s back means never being afraid to pull the Spandex out of their butt.

TrunkSpace: You are both content creators. How important is it that more women pursue creating content?
Gatewood: I think it’s really important. I think it’s important for women to be learning how to direct and edit, in addition to writing and producing. Our show was very proactive. It was probably 80 percent women writers and the creators were women.
Johnson: So were the directors.
Gatewood: Six out of the nine directors were women and there were 14 women in the cast. It’s all about storytelling. You need the storytellers, which are the writers and the directors, to be a part of that.
And also something we noticed, all 14 of our characters were these layered, amazing women and they felt like real people on the page. 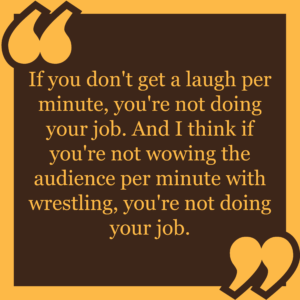 such a cool thing to be a part of. I hope it inspires and encourages more women to tell female-driven stories and to tell their own stories.
Gatewood: When Rebekka and I first started comedy, we were the only women on the improv teams and you can imagine how daunting that was.

TrunkSpace: That’s a lot of pressure.
Gatewood: And it was almost an unwritten rule that there was one woman allowed on the team. It’s so weird. I am very happy to see that these days at the UCB, at The PIT, and everywhere else, that there are definitely a lot more women. And now it’s time to push even further and get them inside the writers’ room. We take particular care to encourage young women to be writing for themselves.
Johnson: Yeah, and we’ve been writing for ourselves and trying to create stuff for us. We’ve been working in comedy with our comedy group The Apple Sisters, which is three gals. You know, we’re just three gals, trying to make it in Hollywood.
Gatewood: We’re so progressive.
Johnson: Yeah. (Laughter)
Gatewood: Ahead of our time! (Laughter)

TrunkSpace: Who better to know your voice than yourself, right?
Gatewood: Yeah, in fact, for the show, when we were doing The Beatdown Biddies, the writer looked at us and said, “This is why we hired you guys, so you don’t have to stick to what’s on the page at all.” And that was just such a vote of confidence. Obviously we’ve been working together for so long and we know each other’s voices, so we know what will make each other look the funniest.
Johnson: Yeah, and when you come from an improv and sketch background, you end up doing everything for yourself.
Gatewood: From writing to producing…
Johnson: To cleaning up. (Laughter)
Gatewood: Yeah.

TrunkSpace: Is it difficult at times to turn off the improv switch and just focus on the story as presented in the script?
Gatewood: Sometimes, yes. (Laughter) We’re always thinking about what’s not on the page and oftentimes that helps you as an actor… to kind of know what’s happening before or after. That’s a pretty common thing, I guess, in acting school. It is hard to turn off our brains because we pitch jokes constantly. And it was only when they were like, “Yeah, yeah, we don’t have time…” (Laughter)
Johnson: Yeah, like in episode 5 when we did the prank calling scene. That was all totally scripted. Everything we said was scripted.
Gatewood: But episode 10…
Johnson: We are able to do it. (Laughter)
Gatewood: In episode 10 as The Beatdown Biddies, they just let us go hog wild.
Johnson: Yeah, and we will not stop talking unless you make us. (Laughter)

TrunkSpace: Getting to improv in “GLOW” is kind of perfect for that world because so much of professional wrestling, at least in terms of character work, is unscripted.
Gatewood: I have to say, I was very surprised how much sketch comedy was a like wrestling. You’re doing a lot of improv, a lot of comedy, and wearing stupid costumes most of the time. (Laughter)
Johnson: You’re committing really hard to a character and that’s what makes the best kind of sketch comedy, when you’re really committed to whatever it is that you’re doing character-wise.
Gatewood: And trying to make each other look good. The cool thing about wrestling, which I think I learned over time, is that it’s unlike regular sports where you don’t know what’s going on. With wrestling, it’s always guaranteed to be an awesome match because they’re going to hit certain beats and I think that’s the same thing with sketch comedy.
Johnson: Yeah.
Gatewood: If you don’t get a laugh per minute, you’re not doing your job. And I think if you’re not wowing the audience per minute with wrestling, you’re not doing your job.
Johnson: It’s another art form for storytelling. It’s a cool, athletic art form and a way to tell stories in this physical way, which is just so fun. I could wrestle right now if you’d let me.

TrunkSpace: (Laughter) One of the cool things for you two must have been the idea that you were actually getting to play multiple characters in “GLOW.” You were your real-life series personas Dawn and Stacey, but then also your wrestling personas.
Johnson: Yeah, I feel really lucky that we got to do that because we do come from this sketch background and we love playing all different kinds of characters. Even in episode 3 when we had to do the Kuntar play, it was just so much fun to stretch and do all different kinds of voices.
Gatewood: To play good guys and bad guys.
Johnson: Yeah. 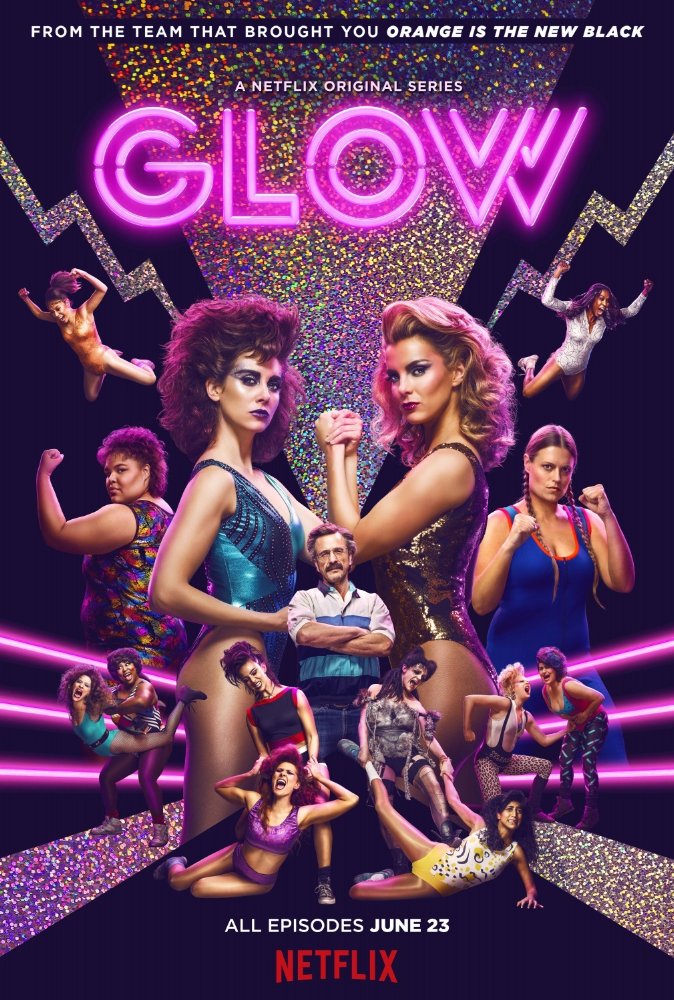 TrunkSpace: Speaking of bad guys, at one point your characters are tasked with wrestling under the guise of a couple of members of the KKK. From what we read, you had no idea that was going to happen, right?
Johnson: Yeah, it was just for that one episode. We go back to the Biddies too. (Laughter)
Gatewood: We were really nervous. When we saw that, we had no idea what we were doing. They held that information from us until the last minute when the scripts came out.
Johnson: We started working on the match and we thought we were gonna be the Biddies. It’s just like what happened in the show.
Gatewood: (Laugher)
Johnson: We were like, “So we’re gonna be the Biddies,” and then they were like, “Well, actually you’re the bad guys.”
Gatewood: “You’re gonna be wearing, you know, some things that might make your wrestling weird.”

TrunkSpace: (Laughter) Surprise!
Johnson: Yeah, and Kimmy looked over the shoulder of our wrestling coach and read his script. Her face turned white and she was like, “Um… it’s the KKK.” And we were both freaking out.
Gatewood: “We’re bad. We’re bad guys. We’re really bad guys.”
Johnson: Yeah, we didn’t know how it was gonna be handled, but it ended up being such an important and cool thing to do.
Gatewood: And surprisingly funny too.
Johnson: Yeah.

TrunkSpace: Do you each have your own favorite moment from a performance standpoint?
Johnson: Well, I’ll say it was when I saw episode 3, at the end when we first play The Beatdown Biddies, and we’re doing the promo for it. Kim and I had crafted those jokes and when I saw they were in, honestly, I cried so hard. And it’s so ridiculous, because I say, “I’m like a good fiber cereal, I’ll make you shit your pants!”
Gatewood: (Laughter)
Johnson: And I cried. I was like, “It’s in, man! That made it in there!” Which is a ridiculous thing to cry about, but I’ve been doing comedy for so long that it just meant so much to me. (Laughter)
Gatewood: I think the scene in episode 7, right before we put on our hoods, was a really awesome moment. It was the first scene where you saw Dawn and Stacey by themselves and you got to see just a little glimpse of them not being total clowns.
Johnson: Right. They were not “on.” We weren’t putting on a show for anybody.

TrunkSpace: We get the impression that you guys really have each other to rely on, not only in performance but in life.
Johnson: Yeah, we have each other. That’s been really lucky.
Gatewood: It is the benefit of being in a duo that you can constantly watch each other’s back, whether it’s finding a good joke or if it’s that your spandex is caught up in your butt.
Johnson: Yeah, she had to button my jeans for me one day because I couldn’t button them. I had to lay down flat and she had to button them. We had each other’s back. (Laughter)

Season 1 of “GLOW” is available now on Netflix.
For more information on The Apple Sister, click here. 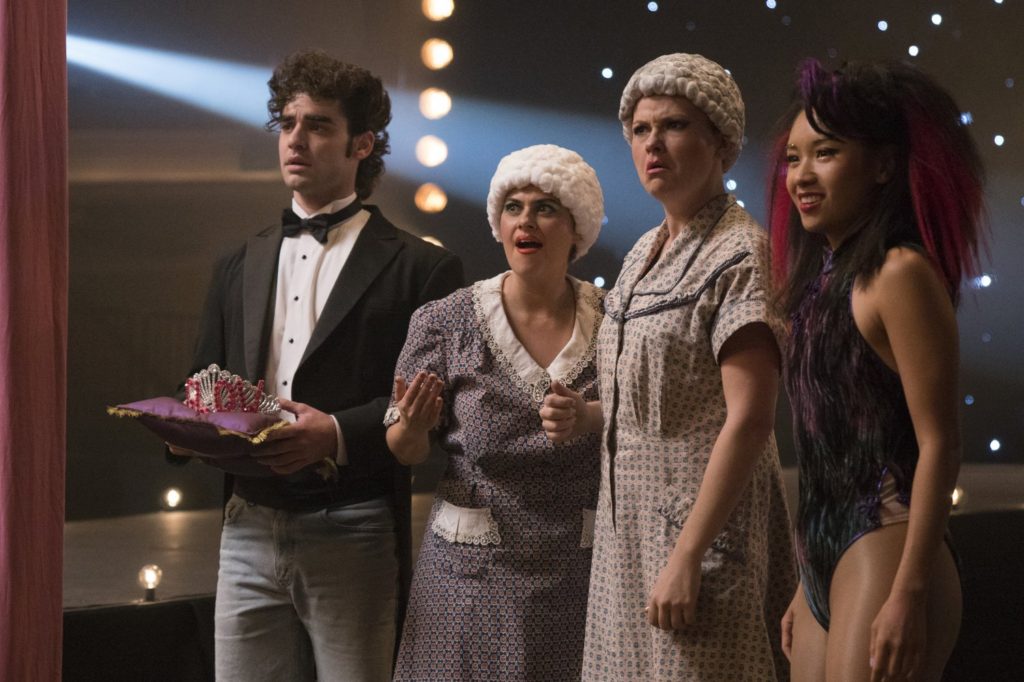