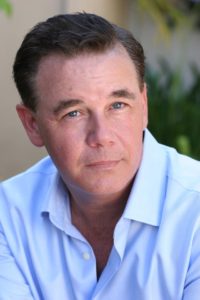 If you were to print Spencer Garrett’s filmography, you would need an entire ream of paper. With dozens upon dozens of interesting and brilliantly-performed roles under his belt, he consistently elevates every project he is a part of. Whereas many character actors help to round out the world in which they inhabit, Garrett becomes the world, blending into the cracks and crevices of the storytelling like performance putty.

Currently starring in the latest season of HBO’s “Insecure” while also prepping for the role of famed investigative journalist Bob Woodward in the upcoming film “The Front Runner,” the Los Angeles native, who has been acting professionally for nearly 30 years, feels like he is just now getting into his groove.

We recently sat down with the Garrett to discuss an abundance of political roles, the part that changed everything, and why he had to walk around on set with half of a Christmas tree sticking out of his stomach.

TrunkSpace: You’ve taken on so many roles in so many projects, which has us wondering, have you ever sat down and figured out just how many characters you’ve played over the course of your career?
Garrett: You know, I never have. I should probably sit down one day and do an algorithm. Jake Tapper, the wonderful CNN news anchor, is an old pal and I was with him not too long ago and he said, “How many people have you played in political films over the years?” And I did a count and I think it was something like 25, which is kind of a lot.

TrunkSpace: And like you said, that is only the political roles. Seeing all of them together is even more impressive.
Garrett: I haven’t really counted, but it’s been a helluva lot of fun, I can tell you that. And I feel like I’m kind of just getting my groove.

TrunkSpace: What is so fascinating is that you’re able in inhabit multiple characters within multiple projects across a relatively 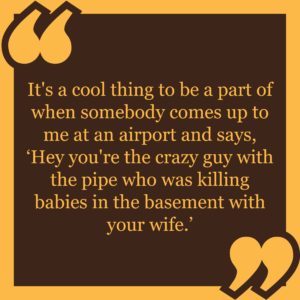 short period of time. Is that a sign of the times with there being so much content now… that there’s just more available to actors to be able to spread their talents across multiple projects?
Garrett: I don’t know… I still chase the same gigs that my colleagues do. I went in and read for something last week and saw 12 pals in the room that I’ve known for 25 years. We’re all kind of going after the same part sometimes and sometimes you get lucky and sometimes somebody else gets the long straw. I’ve just been fortunate. Sometimes there’s a little bit of overlap and I get two, three, four gigs that happen to go all at the same times. I haven’t run into the problem yet of being on so many things at once that I say the lines from one show in another show. Although…

One time I did. I was doing a movie called “Casino Jack” with the great Kevin Spacey that I was shooting in Toronto and then a little, kind of passion project thing that I produced called “Below the Beltway,” another political film. They were both political films, oddly enough, and I was shooting them at the same time, jumping back and forth from Toronto to DC. In one I was playing a Congressman, the other playing a Senator, both kind of morally questionable guys in expensive suits. And I did say the lines of Congressman Tom DeLay once in the other movie that I was in. And the director said, “Hang on, hang on. What are you doing?” And I said, “Oh sorry, that’s from the other movie.” That’s what you call champagne problems, I guess. (Laughter) But that’s the only time it’s ever happened.

TrunkSpace: You’ve done all of these fictional political roles, but these days, political truths really are stranger than fiction!
Garrett: Sadly, that’s true. It has become a little bit of a political theater, as it used to be called, and is now truly political theater. I feel like sometimes we’re living in a reality show that I don’t want to be a part of.

TrunkSpace: And your friend Jake can probably attest to this, but the anchors and news people are becoming pop culture icons now.
Garrett: They’re becoming pop culture icons and still maintaining their journalistic integrity and doing their job as best they can while getting epithets hurled at you and being called “fake news” and all that. They have to keep their hands on the rudder and do a good job. It’s tough, it’s a tough time to be a journalist and a really challenging time. So my hat’s off to all of those guys that are doing the work that they were trained to do.

TrunkSpace: There is so much amazing content being produced these days and almost all of it is so character-driven. Have you noticed a difference in the types of roles you’ve been taking in recent years as opposed to when you started your career?
Garrett: Definitely. I’ve gotten to play roles and characters that really wouldn’t have been thought of 10 years ago. People are seeing me in a different light as I’m getting older in my career and more established, I guess. People are allowing me to take more chances and push the envelope a little bit, which is thrilling for an actor. So when I get a chance to work on a show like “Insecure” on HBO, which is not something that I would have thought I would have been a part of, it’s an actor’s dream. You get to play in a different sandbox every week and work with really, really talented people.

TrunkSpace: And they’re so diverse. From “Insecure” to “Aquarius” to “Bosch,” the projects truly are different sandboxes.
Garrett: Absolutely. “Bosch” was a real treat. I’ve been a fan of Michael Connelly’s books for a long, long time. And Titus Welliver, who is a buddy of mine for 30 years, I love him as a guy and a pal, but as an actor I’ve always held him in very high esteem. And he’s a character guy. He’s a journeyman character guy who’s gone from one project to the next for years and years. And so as a journeyman character guy myself, it’s always such a buzz when you see somebody get to be the number one on the call sheet slot and get to be THE guy. And he fills that role so beautifully and is so great.

So getting to be a part of “Bosch” last year, I was so jazzed to be a part of that thing because I was a huge fan of season 1 and season 2. Every time I’d see Titus, we’d go out for a beer or whatever, and I’d kind of give him a little elbow like, “Hey man, I’m kind of free. I’ll be available.” (Laughter) It came right off of the heels of a really extraordinary experience with “Aquarius,” which is a great show that didn’t really catch fire the way we thought it would but I had such a great role on that. I thought, “I’ll never get a chance to have a role as juicy as that” and then a couple months later “Bosch” came along. So it was quite a gift.

TrunkSpace: Are there any characters that you wished you had more time to spend with?
Garrett: I wish I hadn’t gotten shot on page 42 of “Public Enemies.” (Laughter) That was a bummer. It was an extraordinary film to be a part of and it kind of changed my life in a lot of regards, but yeah, I would have liked to have seen a little more Tommy Carroll throughout the two hours of that movie. It was an experience playing that particular guy. I hope I’m talking to the seven people that saw the movie. (Laughter)

When I auditioned for that role for Michael Mann, it was my first experience with Michael and there have been now several, but going to read for that role, I said to the casting director, “I’m never going to get cast as this kind of gangster, thuggy guy. Can I come in and read for the FBI guy or the lawyer or guys that were more in my comfort zone?” And the casting director, to her great credit and vision, she said, “Spencer, I’ve followed your career for 20 years. I know what you can do and I’ve seen you play 8,000 lawyers. I want to see you do something different.” So she had me come back the next day and read for this other role and I got it and it kind of changed everything, which was really extraordinary.

I was playing a lot of pricks in suits, kind of one right after the other and getting pigeonholed and working consistently, but not feeling challenged. And I kind of got put in this box. And I said, “All right, maybe I’m not gonna take as many of these kinds of roles and try to find other things to do. Try to find other avenues, other characters.” And then after a while, because you’re in this for the long haul, I thought, “What am I complaining about? If this is how they see me, I’m gonna take every role I can get.” To a certain extent it’s difficult being pigeonholed and feeling like you’re put in a box, but at the end of the day, we want to work and we want to keep going. And right around that time, that’s when I got “Public Enemies” and it gave a sort of a Vitamin B-12 shot to the film opportunities that I was being given and it sort of changed everything.

TrunkSpace: One of our favorite things that you ever done was the sort of 1950s-inspired sitcom dad from the “Supernatural” episode, “A Very Supernatural Christmas.”
Garrett: Yes! I love that guy! That was a blast. Not so much walking around for half of the day with half of a Christmas tree stuck out of my stomach. (Laughter) They had this kind of tree branch that was sort of nailed to a board and then the board was strapped to the top half of my body and I was walking around with that all day. And that’s when I thought, “Man, they don’t teach you this at Juilliard. They don’t teach you this at the Neighborhood Playhouse.” Laughter)

I went to my first “Star Trek” convention a couple weeks ago… the 30th anniversary of “Star Trek: The Next Generation.” I always wanted to go and meet the fans. I brought some pictures from the “Supernatural” episode and it was staggering to see how many people were coming up and saying that was their favorite “Supernatural” episode. When I did the episode, I had no idea what a massive show that is. And those two guys, they’re in season 13 or something now, and they go all over the world to these conventions and the fans just adore them and they’re great to the fans. It’s a cool thing to be a part of when somebody comes up to me at an airport and says, “Hey you’re the crazy guy with the pipe who was killing babies in the basement with your wife.”