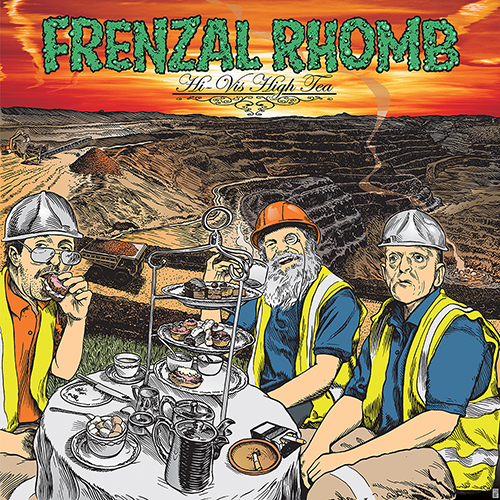 Iconic in the punk rock scene with a longevity that defies the odds, Frenzal Rhomb came together in their native Australia during the early 90s and quickly built an international fanbase that has stayed with them to this day. Currently out in support of “Hi-Vis High Tea,” their ninth studio album, the band stopped by TrunkSpace to get down, get dirty, and get mostly cheeky on subjects ranging from exhaustion, creative familiarity, and Wikipedia repartee.

TrunkSpace: “Hi-Vis High Tea” is your ninth album. Doing nine of anything in a creative capacity is difficult, but nine albums as a band is downright rare. Are you guys just as proud of the accomplishment as you are of the material itself?
Frenzal Rhomb: We’re so tired. So very, very tired. We signed a horribly unfair multi-album deal with Fat Wreck back in the 90s, and to this day they stay on our backs, cracking the whips, forcing us to release new music. We are only proud that we have managed to keep the record label vampires at bay for so long.

TrunkSpace: Speaking of the material, the album consists of 20 songs, with the album itself clocking in at just over 30 minutes. Did you guys set out to make a 20 song offering or did writing that many songs force your hand?
Frenzal Rhomb: We designed the album sleeve before we wrote the songs, and the way it was laid out meant there was space for 20 song titles. Once that was sorted we were pretty much forced into writing 20 songs, no more or less. Luckily for us we had exactly that much creativity. Of course, making them all about a minute-thirty long helped too.

TrunkSpace: In terms of the writing process, how has it changed for the band since you guys first got together in 1992? 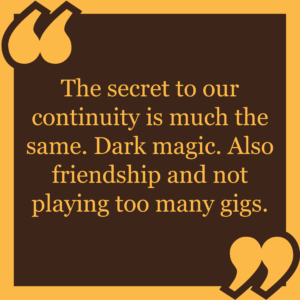 Frenzal Rhomb: It’s exactly the same. We get together at the original drummer, guitarist and bassplayer’s parents’ houses and just bash out the songs. Of course, since those three band members haven’t been in Frenzal for over 15 years, and several of the parents have passed away or sold their houses, this can get very weird. But we insist on familiarity.

TrunkSpace: Many of the bands you guys have shared a stage with over the years have faded away or disbanded. How has Frenzal Rhomb kept things going where others have been unable to?
Frenzal Rhomb: Almost every single band we have shared a stage with has either faded away or disbanded. It’s called the “Frenzal Rhomb Curse” and is a very real thing in punk rock circles. Any band we’ve played with that has survived has done so because they hold the amulet of the golden oracle, a highly-magical stone that allows the wearer to continue making punk-rock music after coming in contact with the curse, but the price for that is that we get to steal a riff or two from them.

The secret to our continuity is much the same. Dark magic. Also friendship and not playing too many gigs.

TrunkSpace: They say absence makes the heart grow fonder. What is the most amount of time the band has spent away from each other and does absence also make creativity grow?
Frenzal Rhomb: I’ve never met the other members of the band. We keep it anonymous so the relationship doesn’t get stale. Onstage we keep ourselves apart with giant makeshift walls and every photoshoot is a composite of four separate photos, like NASA’s fake photos of a spherical earth. 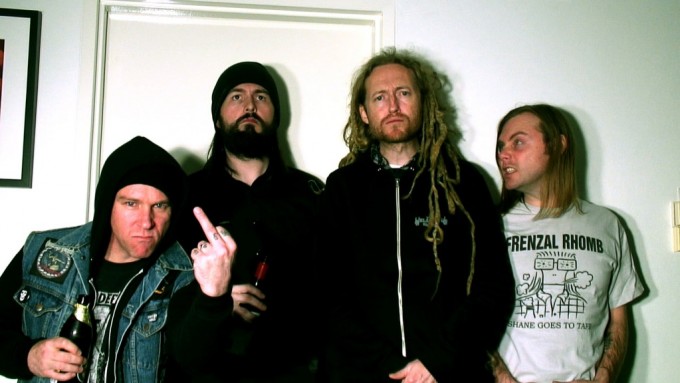 TrunkSpace: The punk scene has changed quite a bit since you guys first got together. Everyone has a different take on whether those changes are good, bad or somewhere in-between. What’s your perspective on where the scene and punk music is at in 2017?
Frenzal Rhomb: Jason thinks the changes are good, Tom thinks they’re bad, and Lindsay & Gordy insist they’re somewhere in-between.

TrunkSpace: The Wikipedia page for the band features this line:
“The group has generated controversy for profanity in cover art, song titles and lyrics, for behavior of members on and off the stage, and for its associations with causes such as veganism and radical politics.”

As you look back over your time together, do you view anything that falls into this category as controversial or is it the kind of stuff that other people miss the mark on when they slap labels on things?
Frenzal Rhomb: I’ll answer this question with a line also taken from the band’s wikipedia page:

TrunkSpace: With all of that in mind, are there things that you would do differently as you look back now?
Frenzal Rhomb: Yes, I’d probably format that last answer differently. The dot point is at odds with the rest of this interview.

TrunkSpace: What is the happiest, most creatively-rewarding memory you have as part of Frenzal Rhomb?
Frenzal Rhomb: That last answer.

TrunkSpace: “The Walking Dead” brought about a zombie apocalypse on the world. If a Frenzal Rhomb apocalypse hit and every Frenzal Rhomb fan was wiped out, what would you guys do? Would you still keep writing music?
Frenzal Rhomb: We would question a zombie-infestation that targets only Frenzal Rhomb fans as it seems quite specific and strange, but if it turned out to be true we would then see if these Frenzal Rhomb zombies kept on living in some form, like zombies apparently do, in which case we would write songs more easily, since zombies don’t seem to have too much musical taste.

TrunkSpace: In the song “School Reunion” you sing “Fuck my school reunion!” We here at TrunkSpace are all nearing our 20 year reunions. Can we roll in with a boombox and “School Reunion” playing when that day comes?
Frenzal Rhomb: Sorry, but playing our music in any public space would require registering your school reunion with the local music publishing authority. I believe it’s ASCAP in the United States, and paying the appropriate royalties.