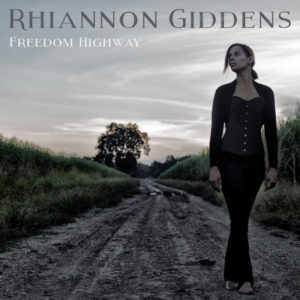 Lyrics of Note:
Mama, dear mama, come and stand by me
I feel a lightness in my feet, a longing to be free
My heart it is a-shaking, with an old, old song
I hear the voices sayin’, it’s time for moving on

Sometimes things just come along at the right time. There’s no real explanation for when the stars align and you’re presented with something that ends up defining a moment. It’s fate. It’s serendipity. It’s stupid luck.

Whatever the power in play, Giddens’ “Freedom Highway” appeared in this writer’s life in a fateful, serendipitous and stupid luck way.

14 hours before I clicked on the tiny play button with the rightward facing triangle, I was seated in a 24-hour animal hospital listening to a veterinarian deliver a heart-wrenching diagnosis for my beloved dog who has been my shadow for seven years. It devastated me and anyone with a soft spot for a four-legged friend understands that the emotional impact regarding the inability to help them in their time of need, a toxic mixture of guilt and helplessness, is one that you can’t easily shake.

As I sat down to work the next day, my head was cloudy. Unfocused. Dwelling only causes the mind to digest itself however, so I pushed forward and decided to start with a review. “Freedom Highway” began to stream.

As I listened to the songs filter out of my speakers, I found myself being drawn into them as if they were speaking directly to me, and in doing so, highlighting the various psychological complexities I was experiencing in the wake of the previous night’s bad news. The beautiful piano that opens “Birmingham Sunday” played as a tribute to my longtime companion and I felt myself being caught up in the sheer power that music can have over another human being.

By the time I had finished listening to the entire album, I felt renewed. Giddens voice carried hope and optimism into a space that had temporarily lost sight of any such outlooks. With “Freedom Highway” she pulled me out of the darkness and into the light, eliciting a jump start of the soul that had a direct and instantaneous impact. And when all is said and done, isn’t that what great music is supposed to do?