With a global pandemic raging, almost all of us were forced into quarantine at some point in 2020. Being self-contained – isolated – would have seemed like science fiction just a year ago, but reality is not that far removed from make believe these days. Sure, the characters in TNT’s Snowpiercer are technically locked down on a train, but they’re still locked down. We can all relate to that.

“I think that, when working in the world of science fiction, the line between fiction and reality gets blurred quite easily,” says series star Fiona Vroom, who plays Ms. Gillies. “That’s why it’s so much fun. Because we, as an audience can really imagine it happening.”

We recently sat down with Vroom* to discuss Julie Andrews inspiration, Jennifer Connelly admiration, and why a career in acting is both a blessing and a curse.

TrunkSpace: Snowpiercer is based on a popular graphic novel/film that has became a cult classic over the last few years. Is there a different vibe signing on to a project like this knowing that there will be eyeballs on it when it eventually airs? Does it take some of the uncertainty out of it?
Vroom: Snowpiercer, being a popular franchise already, comes with expectations. The fans and audiences were waiting for this show to launch, and there will be people who are disappointed, and people who are crazy about it. As a performer signing on to the project, I feel a certain amount of responsibility to deliver for the fans, so there is an added amount of pressure. But it’s such a fun and thrilling ride being on this train. Everyone will enjoy it in some way.

TrunkSpace: There’s something kind of timely to the project in that – here is humanity inhabiting a singular location all while we, as a society, are on lockdown. Have the parallels between fiction and reality blurred even more so now given where we are currently? 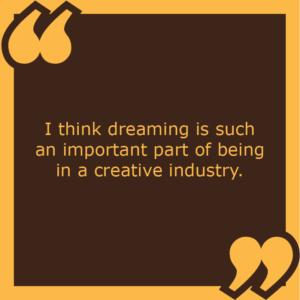 Vroom: I think that, when working in the world of science fiction, the line between fiction and reality gets blurred quite easily. That’s why it’s so much fun. Because we, as an audience can really imagine it happening. And I feel that the way society is at the moment, at least I’m hoping that people will be able to slow down, pay attention to what we are doing to the planet so that we don’t end up freezing the earth by accident and have to live on a train. Global warming is real, and it’s not going away unless we change.

TrunkSpace: Without new projects actively in production right now, Snowpiercer is one of the last big new series audiences may see for awhile. Has the current state of the world changed this experience for you – waiting for and promoting a new project – while in the middle of all of this uncertainty?
Vroom: The experience is different because we can’t all be together to celebrate the launch of this show that has been in the works for three years now. So it’s disappointing in that way. We did hold a Virtual Premiere, and it was actually really fun. Things will be different, but they will only feel different for a little while. Soon enough it will be what we are used to.

TrunkSpace: In the series you’re playing Miss Gillies. Without giving too much away, can you tell us what’s in store for her and what you enjoyed most about getting to bring her to life?
Vroom: Miss Gillies is a little ray of sunshine onboard the train. It was so much fun bringing her to life. I drew from one of my favorite movies, The Sound Of Music, and took a page from Julie Andrews in the way she interacts with children on screen. Miss Gillies runs a tight classroom, but she has a secret, as do many of the characters on board, so who can you really trust? It was a pleasure playing that fine line.

TrunkSpace: For the viewer, the end product is always the most memorable, but for those involved in the project it must go much further than that. What’s the most memorable aspect of getting to work on Snowpiercer that you’ll carry with you through the rest of your life and career?
Vroom: Watching Jennifer Connelly work. She is so precise. She cares about every detail, she asks questions that are important to the world we are playing in. She is an extremely careful and detailed worker and I learned a lot from watching her.

TrunkSpace: What has been an unexpected bonus or reward – something you could have never anticipated when you first started your journey as an actress – to a career in the arts? What is an aspect of your life that you wouldn’t have now had you not taken this path, but at the same time, one that you can’t imagine your life without now?
Vroom: I like this question, thank you for asking it because it’s important to remember why I chose to be an actor. I always say, it’s a blessing and a curse. To have a career in the arts isn’t always easy. It takes a long time to be a trusted professional. It’s a hustle and sometimes you feel like you’re on a hamster wheel. Some days are long and hard and you’re outside on location and it’s freezing and the conditions are really rough and you have to act like nothing’s bothering you. Other days can be easier. Now I’m at a place in my career where I feel very comfortable. I’ve been very lucky to work as much as I do. And now I am learning to enjoy the down times. To enjoy having a day or a week off and slowing down. So the freedom I’m feeling at the moment is new to me, and a surprise, but I’m really grateful for it.

TrunkSpace: There are ups and downs in any career, but certainly the entertainment industry is known for delivering peaks and valleys. Was there ever a moment where you considered walking away from acting, and if so, what kept you on your path and looking forward?
Vroom: I often think about leaving the business because it is filled with so many highs and lows and that really takes a toll on your soul after a while. Sometimes six months can go by without a booking and you start to think it’s over, I’m washed up, I’m never going to book again… and then you book a job and all those feelings of insecurity melt away and you are once again filled with hope and encouragement. So I often feel like I’m in a relationship where my partner (in this case, the industry) gaslights you enough to string you along a little while longer. You get stronger and it gets easier to deal with, but it doesn’t ever go away, at least not for me.

TrunkSpace: You’ve appeared in a number of memorable series and projects over the years. We’re curious… what is a character that you wished you had more time to spend with and why?
Vroom: I wish I could have spent more time being Barbara Beaumont in Season 11 of The X-Files. She was fun, and really layered. First of all it was fun to be a cult leader and to play a character who was actually 90 years of age. I wished I could have stayed in the world of being the villain. It was sooooo fun playing a scary powerful woman who on the flip side was actually very insecure herself.

TrunkSpace: What has been the highlight of your career thus far?
Vroom: Working with Tim Burton. He’s a genius and I love his films and his way of telling stories. I was so honored to be in Big Eyes.

TrunkSpace: Time machine question. If you could jump ahead 10 years and get a glimpse of what your career looks like a decade from now, would you take that journey? If not, why?
Vroom: Wow, that’s wild to think about. I often dream of what my career will look like. I think dreaming is such an important part of being in a creative industry. I dream all the time that I’m working on a film with Susan Sarandon and Meryl Streep and we are all great friends. And sure, I’ll take a peek of what’s in store for me in the next decade… why the hell not!