With the new Netflix movie “Polar” being so stylized and visually enticing, actress Fei Ren had the freedom in making her character Hilde her own. Adopting a soft look with her makeup over one eye and a harder look with the other, the asymmetric approach not only fit into the aesthetic of the film, but allowed her to tap into her character’s backstory and discover the A-team assassin’s duality.

“It’s a great creative playground because I had the option to make the character larger than life and explore it artistically.”

We recently sat down with Ren to discuss Hilde’s spirit animal, the film’s on-set atmosphere, and how acting was never part of her original game plan.

TrunkSpace: “Polar” is based on the webcomic/graphic novel of the same name. Comics continue to be a well that Hollywood taps, both for film and television adaptation. As an actor, what is it like having that source material (and existing audience!) available to you, but at the same time, not having the pressure of stepping into a brand that the masses have been exposed to yet, like a Spider-Man or Batman?
Ren: Finding Hilde and her layers was almost no different to working on any other characters. I think that with “Polar” being such a stylized graphic novel without words, I had lots of room to fill in the blanks of her backstory. It’s rather freeing. In acting, there is a saying that the more specific you get, the more universal and relatable your character becomes. I imagine that no matter how large a fan base a character has, our job is still connected to the human core and to make it our own. Pressure from the public will always be there, but when you are creating art, you can’t do it to please everybody’s idea of the character. You have to make it your own and step into that skin and become it.

TrunkSpace: The original comic was very stylized as you mentioned, and what’s great about the film adaptation is that a lot of that is carried over in terms of how it’s shot and the use of color. Visually, what makes the work you did on this project unique in comparison to previous roles?
Ren: It’s highly stylized and very edgy. It’s a great creative playground because I had the option to make the character larger than 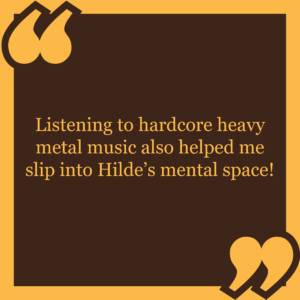 life and explore it artistically. The makeup, hair and costume department did such an amazing job creating my look. And working together as a team, I ended up discovering some of the character’s history. For example, the different makeup on each eye. It started as we were doing testing makeup on different eyes, and the whole team ended up loving the asymmetric look. So, Hilde had one soft look on one eye, and a harder look on the other, which worked with the hair too! The look inspired me to discover Hilde’s duality. Hilde’s past being soft and feminine didn’t serve her well in that world. Hence, she becomes the hardcore, sleek, efficient killer you see now. She only lets down her guard in front of Blut. So, every day, her soft eye is a reminder to her to stay focused and her hard eye shows her determination. Overall, it was plenty of fun because we were given room to create and explore!

TrunkSpace: From the outside looking in, this was a physically demanding project to be a part of. How did you prepare to slip into the butt-kicking shoes of assassin Hilde?
Ren: I had a personal trainer for kickboxing and did yoga daily. The production also gave me thorough gun and safety training for an entire week, so the weapons became part of my body. Listening to hardcore heavy metal music also helped me slip into Hilde’s mental space!

TrunkSpace: When you learned that you had been cast as Hilde, what aspects of her were you most excited to bring to life and did that change the further into production that you got? Did you discover new things about her that you ended up enjoying more than you would have expected?
Ren: When I first got the role of Hilde, I loved the idea that she is cocky, masculine and savage. I imagined her spirit animal as an ape. Then the chemistry of the “A-team” being so playful and family-like, Hilde becomes a black panther. She is sleek and economical with movements when she is hunting. She is protective of the A-team, playful at times and holds them together when necessary. So, she is still intense, but has more colors and shape, which is more fun to play!

TrunkSpace: For the viewer, the most memorable part of a film or television series is the end product, but for those involved in it, we would imagine it’s the experience. For you, what aspects of working on “Polar” will you carry with you through the rest of your career and life?
Ren: The grounded passionate energy of the people in the film’s crew. Rumor has it that some Hollywood stars and directors are tricky to work with. I had an excellent first-hand experience! On the set of “Polar,” there were no egos and no games. Everyone is passionate about the work, and not taking themselves too seriously. During lunchtime, we all got together and joked around, ate, talked about the scenes, and we all come from different parts of the world, so we shared stories. The production was in the winter, and sometimes the days got long and freezing cold. Shooting a movie is not easy, so having a great ensemble makes a huge difference!

TrunkSpace: From what we understand, your career in the arts began after you started modeling. Did pursuing modeling ultimately inspire you to change direction with your life and take a path that you may not have walked otherwise?
Ren: Oh, totally! I was so nerdy before I started modeling. My world view was my parents’ vision: get a degree in accounting or finance, get married at 25 and have babies. I didn’t know what I wanted, let along dare to dream of pursuing arts. Growing up trained in dancing and painting, I always liked arts and performing, but to think this passion could turn into a career path was seemingly impossible. My family is made of scientists, engineers and professors. They appreciate art as leisure, but never considered it as a job. Getting into modeling, traveling and starting to discover different artistic expressions freed and empowered me in so many ways. It awakened parts of me that had been suppressed. In modeling, I learned to take control of my own destiny, follow my passion, persevere in learning, which becomes essential for building my acting career.

TrunkSpace: You’ve been acting for about five years now. In that time, what is the biggest lesson you’ve learned either on set or in the midst of a job that you find yourself applying to all of your work moving forward now?
Ren: There is a balance in owning your character work and allowing it room to grow by collaborating with your team. You have to trust your instinct and allow yourself to play. I think filmmaking is such a collaborative art form. There is the initial audition, but once you’re on set, your role usually evolves and deepens or deviates quite a bit from your original idea. It’s important not to hold on to the idea of what you think your character should be, but get into the whole skin of it, get into the body, allow your body and instinct to play, allow yourself to be in the moment. It’s where the best work lives. On the other hand, though, you have to take ownership of your work. Sometimes people have inputs and ideas on what they think your character could be. It can be confusing if you take all the suggestions. So, you need to find a balance, trust what you’re bringing as long as you serve the true intention behind the story you are telling.

TrunkSpace: You’re also a director. Do you think having that perspective makes you a better actor and does knowing what an actor needs from a director make you a better director?
Ren: I believe they complement each other. When I am directing theater, I often use my own acting tools to help actors find the emotional truth of the characters and get very specific with relationships and intention in the story. Directing and coaching other actors can help me understand my own acting better. That said, I find it’s often still easier to bring other actors to do their best job than it is to direct yourself.

TrunkSpace: You have a passion for the theater. In terms of acting, does the stage give you a different experience personally than when you’re performing in front of the camera?
Ren: Very different in many ways. In theater, the effect of your work is immediate, there is an energy feeding back and forth from the audience. It’s electrifying. Especially in comedy, the laughter and energy of the audience become part of the play. Also, in theater, you live the character’s whole arc at once, without cut and reset. It feels more complete during performing. With film acting, lots of times there are hundreds of people around the set and when the director says action, it’s on. You’ll record a scene multiple times, from different angles. You experience the character in chunks and the challenge lies in staying focused, ready and keep discovering it moment to moment, takes after takes, with all that’s happening around you. Both are exciting and require you to show up and be present, put ego aside and serve the character and the story. And both are satisfying when you feel or see the impact and joy you brought to your audience at the end of the day.

TrunkSpace: Time machine question. If you could jump ahead 10 years and get a glimpse of what your career looks like a decade from now, would you take that journey? If not, why?
Ren: (Laughter) Maybe not! Life is magical, and I don’t want to know how the magic worked, and then watch the magic show. It would ruin the fun. I want to experience it moment to moment!