“Welcome to Marwen” may be one of the more visually unique projects to come out of Hollywood in some time, but the voice of the film – the story and how that story unfolds – is nearly just as rare. Harkening back to the movie-making days of the late 1980s and 1990s, the film is a feel-good, character-driven escape from superheroes and end of days disasters. For star Falk Hentschel, who plays “villain” Hauptsturmführer Ludwig Topf, that is the exact kind of project that inspired him to pursue a career in the creative arts in the first place.

We recently sat down with Hentschel to discuss hanging up his dance shoes, taking direction from Robert Zemeckis, and how “Welcome to Marwen” saved him.

TrunkSpace: Your professional career began in dance, but from what we understand, your dream was always to act. Was there ever a moment where you felt that acting was taking a backseat and is that what prompted you to pursue your dream with a new focus?
Hentschel: Yes, absolutely. From when I was 14 years old ‘til about 21 there wasn’t too much acting opportunity in my life. I had shifted my focus onto dance in the hopes that the journey would lead me back to acting. I always spent time on filmmaking somehow, whether it was practicing monologues, getting more familiar with different American accents, or studying my favorite movies over and over again, but dance was the bigger focus in those years. But there came a point, once I had been in LA for a little while, where I realized that I needed to shift my focus 100 percent to filmmaking. It came to me when I auditioned for Justin Timberlake’s “FutureSex/LoveShow” tour. That would have been the pinnacle for my dance career and it was pretty much the only thing left that I wanted to do as a dancer. When I didn’t get the gig, I decided it was time to go back to my childhood dreams and passions – filmmaking.

From one day to the next, I canceled all my classes at Debbie Reynolds (Dance Studio), let my agent know that I would no longer pursue a career as a dancer/choreographer and pretty much hung up my dance shoes.

TrunkSpace: Your new film “Welcome to Marwen” entertains, but it also is saying something, which to us, is always the most powerful form of art – one that can leave an impact in multiple ways. As a performer, what does it mean to be involved in a project that is accomplishing more than just ticket sales?
Hentschel: For me that’s the ultimate goal. It’s honestly the only type of project I want to be doing. Unfortunately it has become very rare to 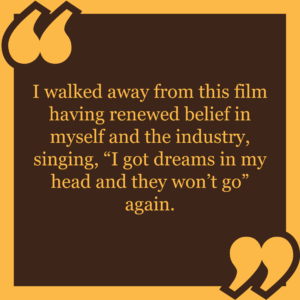 have a project like that come your way. Growing up, I have always been inspired to think, feel and act differently after coming out of a movie theater. Sometimes very significantly so, sometimes more subtly, but no matter what, most movies back then inspired me.

So to now be a part of a film that has the potential to really move people and make them think about things in a different way is something I’m very grateful for. It’s a dream come true and has set a new standard for me as far as what I’m looking to do in the future. I truly hope people are as inspired and affected by the film as I was making it.

TrunkSpace: The subject matter is heavy at times. Other than pronouncing your character’s name – Hauptsturmführer Ludwig Topf – what was the most difficult aspect of discovering and slipping into the skin of this particular guy? What did you struggle with throughout the process of becoming the “villain” of the film?
Hentschel: (Laughter) Yeah, the character’s name is a mouthful, isn’t it?

Quite honestly, Hauptsturmführer Topf was not the biggest challenge. Topf is an old-school villain and on top of that, a doll. That allows an actor to really play around and be larger than life. Also playing in the MoCap world brought a certain freedom to acting that I had not experienced before. Everything other than your fellow actors had to be created in your mind.

It was “the thug” that beats Mark into a coma that was the real challenge to connect to although he has less scenes and less “to do.” He was the one that occupied my mind most. I can not play a character without understanding and relating to them, especially in this case since it is a true story. I truly believe that all humans come from a source of love and that all of us are spending our lives seeking love. The “villains” not only in our stories but also in our lives are usually just very, very hurt people that are longing for love. It’s a sad thing if you remember that those villains were beautiful babies once and someone’s child and had all the potential for greatness. Long story short, I decided that my “thug” character maybe related much more to Mark than we think and that the reason he almost killed Mark was jealousy and longing. Mark had a courage to truly be himself, even in front of these dangerous men. The “thug” probably wished he could have been this courageous and honest himself. He felt threatened by Mark and therefor lashed out. It took a long time for me to find this angle. I’m chuckling now, ‘cause on screen it probably doesn’t matter but it mattered to me.

TrunkSpace: Helping to shape your performance throughout the course of the film was none other than director Robert Zemeckis, an icon of the industry. What did he help to teach you about yourself as a performer on this film that perhaps you didn’t know you were capable of before your first day on set?
Hentschel: Bob is an incredible communicator. He knows his story down to the smallest details. He gently guides you when needed but also lets you do your thing.

The best gift that Bob gave me ultimately though was trust. In both directions. It was so easy to trust Bob every step of the way. I mean, come on, he is my childhood hero, and yet at the same time, I felt that he trusted me to take care of my job, which is a big deal for someone who grew up on “Back to the Future,” “Who Framed Roger Rabbit” and “Forrest Gump.” It makes you feel like you belong. He trusted his entire team every step of the way. It made everyone give their all every single moment of the shoot. You don’t wanna let someone down that believes in you. Often times people in Hollywood use fear to get people to follow them. It’s refreshing when it’s encouragement and trust instead. It was everything and more than I had imagined it being.

TrunkSpace: Visually the film is so unique. What was your reaction when you saw yourself brought to life as a doll?
Hentschel: I haven’t seen the film yet but from what I saw in my ADR sessions it was awesome. Very trippy. There are some sequences I have not seen yet that I can’t wait to see come to life. 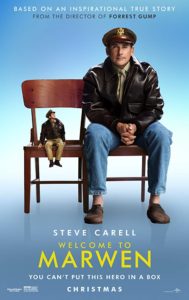 TrunkSpace: For the audience, the most memorable aspect of a film is the finished project, but we would imagine for you, it’s the process of seeing it all come together. What was the biggest highlight of being involved in the film thus far – the moment that you’ll carry with you through the rest of your life/career?
Hentschel: In the second trailer for “Welcome to Marwen,” there is a moment where the song goes, “I got dreams in my head and they won’t go.” That sums up the whole experience to me. A little before “Welcome To Marwen,” I was pretty down about my career and about Hollywood in general. The type of movies that got me to dream of being an actor were no longer made and the experience to be a professional in Hollywood came with many aspects that are soul crushing. The flame of my dreams was dimming and I was very depressed. “Welcome To Marwen,” thanks to Bob, the producers, the cast and crew, delivered exactly what I had always thought Hollywood to be – creative playground for dreamers. Everyone playing together trying to create something beautiful. I walked away from this film having renewed belief in myself and the industry, singing, “I got dreams in my head and they won’t go” again.

TrunkSpace: You’re giving life to a bad dude in “Welcome To Marwen,” but you’re also familiar with playing heroes having portrayed “Hawkman” in The CW’s DC Universe. Is character diversity one of the draws of getting to be an actor? Does the variety keep it interesting, and is that why actors are so concerned about being typecast?
Hentschel: That’s a great question. Personally for me the answer is YES and YES. The whole point for me of being an actor is to be able to experience more than one life, even if it’s just for a brief moment in time. To get a little insight into someone other than you. To do things you would never get to do in real life.

The typecast thing is something I’ve always dreaded and have tried to avoid. Sometimes it’s nice to come back to a “type” because you feel like there is more to explore there than you were able to do before. But I don’t wanna get stuck playing the same thing over and over again. I long for new discoveries and new challenges, so I try to keep it fresh as much as I can.

TrunkSpace: Does “Welcome To Marwen” present you in a way that you think an audience – or those in a position to cast roles – have yet to see you in? Is Hauptsturmführer Ludwig Topf unlike anyone we have seen you inhabit thus far in your career?
Hentschel: I started my career playing villains, so it’s not a brand new thing to see me do. But I wonder how “Topf” will come across. After all, I’m playing a doll brought to life by Mark’s imagination, so of course I’m hoping that there will be little surprises here and there. Maybe I even get a few chuckles out of people at times. That would be lovely.

TrunkSpace: What has been the highlight of your career thus far?
Hentschel: “Welcome to Marwen.” I’ve grown a ton through having had the privilege to work with such incredible talent, I’ve made wonderful life long friends and the experience revived my love for filmmaking. In a sense, it saved me.

TrunkSpace: Time machine question. If you could jump ahead 10 years and get a glimpse of what your career looks like a decade from now, would you take that journey? If not, why?
Hentschel: I don’t think I would. It’s like opening presents under the Xmas tree before Xmas. I would rob myself of the discovery process and then when Xmas comes it wouldn’t be as delicious anymore. I believe that we’re always right where we’re meant to be, ready for what’s coming to us, for better or worse. I want to trust life to deliver its goods to me at its own pace.