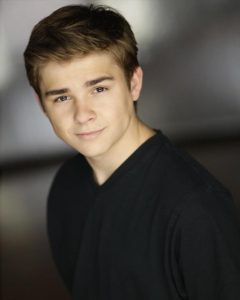 As “Supernatural” prepares to enter its 13th season, it makes sense that a number of actors have been relied upon to play young Dean Winchester. Whether due to flashbacks or evil, age-altering spells, the writers of the long-running series have never been afraid to delve deeper into the “road so far” in order to give fans a glimpse at how the Winchester boys came to be. And while many have played the pie-loving eldest brother over the years, there has been only one actor capable of completely capturing what Jensen Ackles created in Dean Winchester and that actor is Dylan Everett.

We recently sat down with Everett to discuss how he became a lean, mean, Dean machine, why he enjoyed playing in both the comedy and drama worlds that the show is known for, and what we can expect from his new Starz series “Insomnia.”

TrunkSpace: You’ve done a ton of film and television roles over the course of your career, but to “Supernatural” fans, you’re the quintessential young Dean Winchester because you play the character so well. Did you have a chance to sit down with Jensen and pick his brain to get a handle on the Dean delivery and mindset?
Everett: Actually, believe it or not, I didn’t get to meet Jensen until, I think, it was the last day of the first episode that we shot. Basically everything I went off of was what I could find online or from the several seasons of the show that I watched before. Even after that, I don’t think I ever actually got to sit down with him and discuss the character, which was unfortunate, because given the nature of the role, we weren’t exactly in the same place at the same time.

TrunkSpace: And yet you absolutely nailed what Jensen had created in Dean.
Everett: Jared helped me out big time. I’ve mentioned before, in previous interviews, but he totally had my back on set, which was big for me. Knowing that someone’s been doing that role for so long, you want to make sure you do it as well as you can and that everyone’s happy with 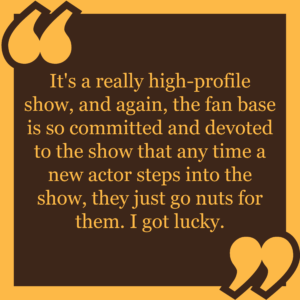 it, including and especially Jensen and the fans.

TrunkSpace: The fans are so rabid for the show. The people who watch it adore it and yet the people who don’t watch the show aren’t even sure if it’s on the air anymore, which is kind of cool. It’s become a bit like a secret club.
Everett: Yep. It totally is. It’s a really well-kept secret. But, it’s been on for almost 15 years, so they’re doing something right. And again, the fans, they keep coming back for more.

TrunkSpace: You did three episodes as young Dean Winchester. Have you felt the reach of the fanbase since doing them and have you seen your own fanbase grow because of it?
Everett: Oh, big time. Yeah. It’s a really high-profile show, and again, the fan base is so committed and devoted to the show that any time a new actor steps into the show, they just go nuts for them. I got lucky. I get to be a younger version of one of the lead characters, so, it was amplified even more for that reason.

TrunkSpace: You grew up in Canada. It seems like a bit of a rite of passage for Canadian actors to appear on the show seeing it has been on for so long and because it shoots up in Vancouver.
Everett: Absolutely. I’ve experienced it. I experienced that similarly with “Degrassi,” where it was, as you said, sort of a rite of passage where everybody and their dog has been on the show. But it’s so great because it’s such a fantastic show. It’s so much fun to do and it was a really exciting experience to get to do that.

TrunkSpace: “Supernatural” writers have always been masterful about blending comedy and drama together and one of the episodes you did in particular, “About a Boy,” did just that. From a performance standpoint, what was it like to get to play in both of those worlds within the same show?
Everett: As you just pointed out, they do it so well, between comedy and drama, they balance it quite perfectly. There was a bit of everything to be had there in the episodes that I got to do. It was really juicy and it was a challenge, as an actor, to sort of push me in a different direction that I hadn’t really explored before. It’s one thing to come up with a character on your own as an actor, but to kind of break habits and really shed your own personality to adopt another one… it was a really cool experience.

TrunkSpace: You also played Mark-Paul Gosselaar playing Zack Morris in the “Unauthorized Saved By the Bell Story.” What a crazy role to take on because you’re actually playing the actor playing the character. So many layers!
Everett: That was exactly it. It was a paradigm on its own. I guess the only difference really was I think I had more parallels with young Mark-Paul Gosselaar than I did with Dean Winchester. It came a little bit more naturally, whereas with the Dean Winchester performance, it had to be a little bit more deliberate on my end. But again, I still had so much fun on both sides.

TrunkSpace: And jumping back to “Supernatural,” in the episode previous to “About a Boy” you were actually playing young Dean Winchester, but in “About a Boy” you were playing old Dean Winchester made young. Mind blown! (Laughter)
Everett: (Laughter) I know. There’s so many angles to it. It’s hard to keep up. I got to experience it on both sides. I had so much fun doing both. It’s challenging because I get to take on Jensen’s character. It’s hard to break your own habits as an actor and adopt somebody else’s.

TrunkSpace: So is it more difficult when you’re playing a character who previously exists or a person who exists in the real world, as opposed to seeing something on the page and creating the character yourself?
Everett: It’s just different. I guess even with the Dean Winchester performances, as with your own characters, there’s a part of yourself that always bleeds through no matter what. But when playing somebody else, especially, like I said, the way that Jensen has played Dean so iconically over the years, you’ve really got to step up and not let it bleed through so much. And that’s tricky.

TrunkSpace: Did you have to play Dean with three different directors giving you feedback as well?
Everett: Yeah. You get direction from the director. You’re getting direction from Jared, who made a very good point to me on set. He said, “I’m going to give you a lot of feedback. I’m going to give you a lot of advice. And it’s not because I’m trying to tell you what to do as an actor, but it’s only because I know Dean. The only person who knows Dean better than me is Jensen. And Jensen’s not here.”

And he’s absolutely right. I took every bit of advice he threw my way and tried to incorporate it as best I could.

TrunkSpace: We watched the trailer for your new Starz series “Insomnia,” which looks not too far from where we’re headed in society right now. (Laughter) Where does your character fall into things?
Everett: I’m not too sure what I’m allowed to talk about. (Laughter) Big ensemble cast. It’s really dark. Really gritty. Really hard hitting show. My character was a total kind of left turn from what I’m used to doing, which was good. You kind of take steps as an actor, and that was the next step for me.

But it’s a really dark, really conflicted character who has a lot of edge to him. Hopefully, when it drops, people get excited and they respond to it.

TrunkSpace: In a lot of ways you grew up in the industry. Is it important for you, as you get older, to sort of look toward those darker roles and to break the habits of casting directors in terms of how they view you and your capabilities as an actor?
Everett: Yeah. That’s always the trick for the actor, right? To not fall into that typecast role. I’ve been very lucky as a young actor. I’ve kind of progressed slowly but surely, and I’ve got to experience everything from the kids roles, like “Wingin’ It,” to more adolescent roles like “Degrassi” and “Supernatural,” and then something like this, which is pretty dark.

“Insomnia” is set to premiere later this year on Starz.