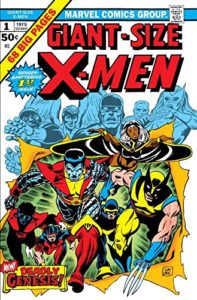 Mutants. Children of the Atom. Feared and hated by the world they have sworn to protect. They are The X-Men!

Originally created almost 60 years ago by Stan Lee and Jack Kirby, the strangest superheroes of all have had a long and expanding career not only in comic books, but also in movies, TV and video games. Their popularity has been a roller coaster ride, going from zeroes to heroes, ebbing and flowing over time, on the brink of cancellation one day and expanding to multiple titles the next. The X-Men saga is so vast, full of fascinating characters and stories, that it might be impossible to build a single timeline for all of them. However, in today’s Trunk Bubbles feature, we will recommend an essential X-Men storyline you can find collected in a hefty volume under the title “Uncanny X-Men Volume 1”, or available online in the Marvel or Comixology apps

Although the story of the X-Men formally started in 1963 with the release of X-Men #1, you can ask any mutant’s aficionado and every single one of them will tell you the same thing: The Claremont- Byrne era is exactly what you need, if you´re looking for the essence of the X-Men.

After a few years of reprinting stories in the original X-Men tittle -while some characters’ stories developed somewhere else in the Marvel Universe- Len Wein and Dave Cockrum took one more shot at the concept of the X-Men in the oversized “Giant Size X-Men #1, revamping the title with a radically different and diverse cast, which included a Canadian super weapon (Wolverine), a Russian farm boy (Colossus), an African woman revered as a goddess (Storm), a circus freak that looked like a demon (Nightcrawler), a powerful native American (Thunderbird), an arrogant Japanese super hero (Sunfire), and a cocky Irish man (Banshee). The only familiar characters were field leader Cyclops and the X-Men founder, Professor Charles Xavier, who drafted these new characters for a mission: to find the original missing X-Men. And then, the world would never be the same again.

With the success of Giant Size X-men #1, Marvel resumed publication of the X-Men book, keeping the original numbering, but this time Chris Claremont was the man in charge of telling the stories of this new -and huge- iteration of the X-Men, first with artist Dave Cockrum, and later with John Byrne. During the first 40+ issues of this legendary run, we would witness the death of a newcomer to the team, the love triangle of Cyclops, Jean Grey and Wolverine, the troubles the new members faced while getting used to living in a new country, their battles with classic villains like Magneto and brand-new foes like Protheus, and the cosmic saga that introduced us to the Shi’ar Empire, the Starjammers and the new identity of X-Men founder Jean Grey as Phoenix.

Now, there are some things you should keep in mind when you read this long epic in one sitting: Comic books were very different 50 years ago. These stories are the foundation of what the X-Men became years later, thus, you might find some issues that doesn´t necessarily match with the rest of the bunch, due to the pressure of delivering 22 bimonthly- and then, monthly- pages of story. Although Claremont planned storylines months in advance, it was clear that some issues were more “stand alone” than others, filling the gap with a break from the ever-expanding action. 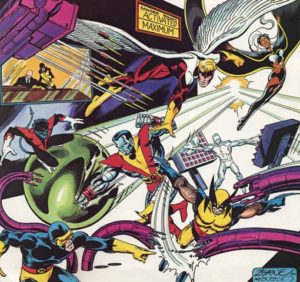 Additionally, these issues are loaded with text in the bubbles and captions. There was always an omniscient narrator providing information on two fronts: some text allowed the reader to pick into the mind and feelings of the characters, while other captions basically described the action you could already see in the page. This narrative style is frankly outdated for today’s standards, but again, you must be aware of the times and context in which those stories where crafted. The plus side of this narration tool is that you could have a lot of things happening in 22 pages, unlike modern narrative styles, in which, typically, stories are meant to be developed in a 5 or 6 issues arc, in order to be collected soon in a single volume. Yes, back in those days, collected reprints were very rare, and the idea was for the reader to pick up the next chapter each month.

As for the art, Cockrum left the book in issue #107, and John Byrne took over artist duties from #108 to #143. Cockrum and Byrne set the visual style of the X-Men for years to come, disregarding a single uniform for the whole team, and creating a unique identity for those characters, color coding them to be easily recognizable in each shot.

Have you ever read these stories? Or do you want to enjoy them for the first time? Drop us a line in any of our social media outlets and let your voice be heard.