TrunkSpace: We’re just emerging from the holiday season cocoon, during which time, you were supporting your new holiday album, “The Christmas Swing.” We’d have to imagine you’re ready to put the Run Run Rudolphs behind you for awhile at this point?
Harpe: That’s one of the hazards of putting out a Christmas album! We played the songs live a bunch in November and December, and now we can’t play them for the rest of the year! I’m fine with that, and ready to move on to the next project.

TrunkSpace: That being said, is it a nice break to be able to step away and sort of refuel the creative tank while still getting the chance to perform? That seems like a situation of having your cake and eating it too.
Harpe: We’ll see. I’ll let you know if and when I’m able to step away! (Laughter) Running a record label with my husband/bass player Jim Countryman, we rarely take a break. I usually go from creating an album to promoting (creating the album art, making a music video which I did myself, to sending out the product) during the week, while gigging most weekends. It’s a lot of work, but I’m grateful to be able to be doing this! I find my creative tank most full when I’m in the middle of a project and I’ve given myself a real deadline.

TrunkSpace: As far as the year ahead is concerned, what does 2019 hold for you in terms of new music? What’s on your creative radar?
Harpe: The first part of the year I will be channeling Memphis Minnie, going back to my roots playing some acoustic blues: first at the International Blues Challenge in Memphis at the end of January, where I’ll be performing solo; second is my second UK tour with my acoustic 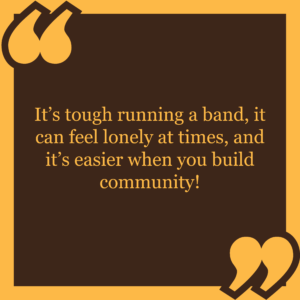 duo in March, featuring Jim Countryman on ukelele bass and myself on acoustic guitar, kazoo and foot percussion; and third I’ll be teaching guitar at Augusta Blues & Swing Week in West Virginia in July! I may just come out with an acoustic album next… I’ll also be putting together demos for the next Erin Harpe & the Delta Swingers album, and releasing a new EP for my “other band” Lovewhip!

TrunkSpace: You wear many hats in the creation of your music, from guitarist to singer, to band leader and songwriter. Do you identify with one role more than the others? If you could only do one, would you be content hanging out in just a singular creative space?
Harpe: If I could do one, that would probably be music production. I produced my last two albums, and I fell in love with the process of putting together recordings – arranging, writing, composing parts. I don’t know if you can really separate the different “jobs” because producing encompasses all of those – guitar, singing, being music director, songwriting and performance. I don’t think I’ll ever give up performing though.

TrunkSpace: You learned to play guitar from your dad. Do you think having that personal connection to the process helped to build a personal relationship with the instrument itself?
Harpe: Definitely. I grew up around guitar, the sounds and the cool-looking vintage instruments my dad played and collected. Funny enough, I started out playing classical flute, but once I switched to guitar, the connection was undeniable.

TrunkSpace: Would the young Erin who first picked up a guitar be surprised by how her career in music has played out thus far?
Harpe: Yes! I was very shy growing up so I never would have believed I could do over 1000 gigs, and remember lyrics in front of people, much less win awards and play music full-time!

TrunkSpace: What do you get writing and performing music that you can’t experience by being a listener alone? What keeps you writing and creating?
Harpe: I get to hear my creations. I get to reshape music to how I imagine it! That drives me. Let’s just say maybe, sometimes I feel like music is getting too generic, too formulaic, too overdone, too lacking in soul and grit, too whatever. I can change that! I can buck the trend, come out with something I like. I can prove that there are some people who know the difference. It may be a small number, but they are out there!

TrunkSpace: As you mentioned, you’re about to embark on a trip to Memphis for the 2019 International Blues Challenge. How do you prepare for an event like that, both mentally and performance-wise?
Harpe: I have to write my set list and time my set, and practice it a lot! That’s the only way to not be nervous, but I’m sure I’ll still be nervous, but it’ll be fine. I’ll jump up and down a bit before my sets. It’s definitely more nerve-racking playing solo than with the band! I’m also going to be performing my Memphis set a few times in public. (Including January 17 at the Plough & Stars in Cambridge, MA.)

I also have to tell myself to go to bed at a reasonable hour in Memphis.

TrunkSpace: Where are you hardest on yourself as an artist?
Harpe: Probably with that question of “success.” I find myself asking “why haven’t I succeeded yet,” when I actually have succeeded in so many aspects of my career. I’m working on giving myself more credit and not comparing my career to other “more famous” musicians.

TrunkSpace: We’re jumping headfirst into 2019. Any New Year’s resolutions that you’re hoping to hold onto as you travel through the months ahead?
Harpe: My resolution is to write more songs, and put out more music, and to reach out more and collaborate this year with other artists and musicians. It’s tough running a band, it can feel lonely at times, and it’s easier when you build community!