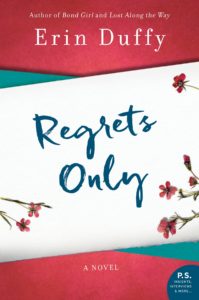 This time out we’re chatting with author Erin Duffy about her new novel “Regrets Only,” why her husband may need to be concerned about character comparisons, and the reason no one should ever adopt her method of writing.

TrunkSpace: As you gear up for the release of “Regrets Only,” what emotions are you juggling with? Is it difficult putting so much of yourself into something and then releasing it into the world?
Duffy: I’m so excited that “Regrets Only” is about to be released! I love this book so much and can’t believe it’s almost pub day! I will say, as happy as I am, I’m also really nervous and mildly terrified. I put a lot of myself into everything I write, and people who know me well will be able to recognize certain attributes in Claire that they know are true to me. It’s very personal in a way, and that’s more than a little unnerving. Actually, now that I think about it, it’s my husband who really should be worried, because if people think that Claire’s husband, Owen, is modeled after him, he’s about to start getting an awful lot of hate mail. Oops.

TrunkSpace: Where did the core concept for “Regrets Only” originate from and what approach did you take to bringing it all together? There are plenty of heavy moments, but at the same time, lots of humor to take the reader on a journey. Was that humor element always present, even from the start?
Duffy: It totally was! Actually, I was about to move from New York City to the suburbs myself, and I was having a hard time accepting that an entire phase of my life was over, and that I was going to have to deal with a house and a car and a mortgage and a lawn and trees and all the stuff that comes with the transition to suburbia. It terrified me, and after one particularly irrational freak out, my husband very calmly said, “What’s the big deal? If you don’t like it, we’ll leave.” And that made me wonder: what if you couldn’t? What would it be like to move somewhere you didn’t want to be, and then become stuck there for one reason or another. That’s where the idea of this book originated. Like most things in life though, I think even bad times are best handled with a good dose of laughter, and let’s be serious, you can often find nuggets of hilarity in tumult. I wanted the reader to feel badly for Claire, but I always wanted them to laugh along with her at the absurdity of her life.

TrunkSpace: When you were putting together the book, did you have a particular reader base in mind, and once you concluded, did you feel that tonally you hit the mark for your desired audience? Is that always a balancing act… finding and reflecting a particular tone throughout the course of an entire novel?
Duffy: This book is interesting because on some level, there had to be a target audience, right? Women who themselves have young families that govern their new lives will totally get Claire and the neuroses she’s battling, but as the book came together I realized that it really speaks to all women no matter what their stage of life. Claire reflects on the choices she made along the way and struggles with the fact that she gave a lot of herself away without stopping to think about the consequences, and that’s something that I think everyone can relate to. “Regrets Only” explores how women define themselves – married, divorced, single, working, non-working, etc., so I think there’s something in this story for everyone.

TrunkSpace: In a way, is suburbia a bit of the “villain” of the book?
Duffy: That is such a great question. In a way, for Claire, it is. City life affords you a certain amount of freedom and anonymity, and you lose both of those things in the suburbs. Small towns are great, unless you are an outsider, in which case they can be pretty scary. But life has a way of making decisions for you sometimes, and that was certainly true in her case. More than anything, suburbia represents a right of passage for Claire and for a lot of women, and that comes with a good amount of conflicting emotions. Some handle the transition more gracefully than others, and Claire, well, she struggles a little. No, a lot!

TrunkSpace: As you look back at the work, what are you most proud of when it comes to “Regrets Only?” 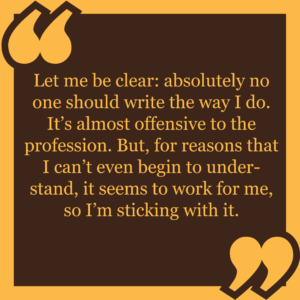 Duffy: I didn’t intend for there to be a feminist angle to “Regrets Only” when I started writing it, but I realized that it really does delve into the pressures that women put on themselves to be the perfect mom, the perfect wife, the perfect professional, and how we need to let all of that go. It’s okay to make choices and prioritize yourself sometimes. A lot of the women in the book struggle with how to define themselves. I’m very proud that I was able to explore that topic while still keeping the humor and the style that my readers enjoy.

TrunkSpace: Prior to pursuing a career as an author, you worked on Wall Street, which inspired your first novel, “Bond Girl.” Do any aspects of your previous career, even within the characters themselves, show up in “Regrets Only?”
Duffy: Claire is certainly an over the top personality, and that’s something that carries over from my previous career. One of the best things about Wall Street is that there are really outrageous characters, and I think I borrow traits from people I used to work with without even realizing it.

TrunkSpace: How long did it take for you to discover your voice as a writer?
Duffy: Honestly, that happened pretty quickly. I’m pretty true to myself in that regard, because I think it helps to distinguish my books from many others. I like snark, and humor, and wit, and I try to imbibe my characters with those qualities as much as possible. That’s what comes naturally to me, and it seems to be what people respond to as well, so I’m not looking to change it!

TrunkSpace: Regarding the process, is writing a labor of love for you or does it feel more like labor? Do you enjoy the process?
Duffy: I really do enjoy the process. It’s fun putting words in someone’s mouth. It’s therapy in a way. Claire has problems with impulse control. A lot of the time she says and does things that I wish I would do if I was in her shoes, but would likely never have the nerve. I like taking some time away from my normal life to create someone else’s. That said, there are days where it is complete and utter torture. There is nothing worse than making time to write and sitting down and discovering that you have nothing interesting to say, but it happens. Those days are awful. The goal is to make sure there are more good days than bad ones, and in this case there definitely were.

TrunkSpace: And what does that process look like? What are the ideal conditions for putting in a good day of writing?
Duffy: The ideal conditions would probably involve an entire day spent in a quiet, enormous office with a soft leather chair, a zen garden, aromatherapy candles, and Enya playing softly in the background. Unfortunately, I have three small kids and next to zero free time, so my writing process is absolutely nothing like that. It’s ugly – so, so ugly. I wrote most of “Regrets Only” in the middle of the night at my kitchen counter while wearing pajamas and slugging stale coffee left over from the previous morning until some child started screaming and forced me to stop. Some days were better than others. Let me be clear: absolutely no one should write the way I do. It’s almost offensive to the profession. But, for reasons that I can’t even begin to understand, it seems to work for me, so I’m sticking with it. 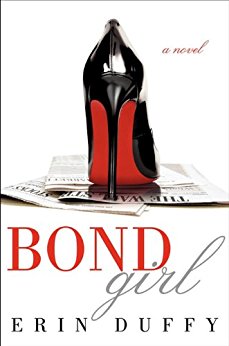 TrunkSpace: Do you self-edit as you write?
Duffy: I definitely self-edit. I will go through two or three complete drafts myself before I ever show it to anyone. You have to be able to read your own work and be honest with yourself when it just isn’t good. I have tossed entire chapters and rewritten them from scratch. I’ve added characters, removed characters, moved the back to the front and the front to the back in order to get the story just right. I’d bet that most writers self-edit. Let me know if you ask anyone else!

TrunkSpace: Where are you the hardest on yourself as a writer?
Duffy: Everywhere. I constantly think my plots should be more complicated, my characters should be more three-dimensional, my vocabulary should be broader, you name it, I critique it. I read a lot, and am constantly amazed at what some other writers are able to accomplish. Every time I start a book my end goal is for my process to become smoother, and to end with something that I’m proud of. I can honestly say that I am very proud of this book.

TrunkSpace: What are you working on now and what will people be able to read next?
Duffy: I’m working on another novel now about a group of women who find their lives intertwined in the most surprising way. The main character has a family secret that eventually turns her life upside down. It’s called “With Friends Like These.” I’ll keep you posted!

“Regrets Only” is available today from William Morrow.