TrunkSpace: When did you decide to pursue comedy as a career and did you make a plan for how you would attack things?
Lies: Ooof. I guess it slowly switched from being a Very Serious Shakespeare Actress who was only getting callbacks for comedy stuff, onward to doing comedy and later viewing myself as more of a writer than a performer. And I had no plan. But I knew people who worked in the industry, so even if it seemed distant, it didn’t seem completely impossible.

TrunkSpace: How long did it take for you to discover your voice as a writer?
Lies: TOO LONG.

That’s the short answer. The long answer is that I think my voice was always there. I just needed to learn to trust it and to learn the craft well enough to actually execute it. But looking back, I don’t think my overall voice has changed all that much. I just have more skill than I used to. 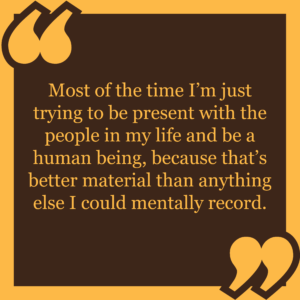 Lies: I can’t even really remember how I used to approach it, but I guess now I’m just way less precious with my stuff. I used to really stress over getting the perfect joke on the first try. But I heard all that advice about how you have to write tons and tons of jokes because most of them will be terrible, and that made me way more productive and write down more of the dumb idiocy I think of. So now instead of taking 20 minutes to write one perfect joke, I take 15 to write 10 mediocre ones and one that can be edited and tweaked to be great.

TrunkSpace: Is the neon “Open” sign in your brain always turned on, and by that we mean, are you always writing and on alert for new material?
Lies: Yes and no. Most of the time I’m just trying to be present with the people in my life and be a human being, because that’s better material than anything else I could mentally record. But I’m also still that quiet kid that just really loved to people watch and observe. And, I have to admit, when I encounter people who are ridiculously, egregiously irritating yet somehow totally unaware, it hits a certain light in my brain that just says, “KEEP GOING.” I’ll egg on the people that everyone else wants to avoid and it drives my friends insane. It’s like the improv maxim “make it worse,” only I truly make it worse by encouraging pretentious dudes to keep talking about how “Proust ruined [them] on short fiction.”

TrunkSpace: How much work goes into a skit before it’s ready to be tested out in front of an audience?
Lies: To give you the most frustrating of answers: it depends. I don’t ever like to take a first draft into the public realm, but once I’ve done one revision, I need a crowd to know if something’s working or not. On the other hand, putting a sketch up without rehearsal is a guaranteed way to fall flat on your face in front of an audience. So. It depends!

TrunkSpace: Are you more comfortable in a pre-written piece or in the freedom of flying by the seat of your comedic pants with improv?
Lies: I can’t really say either way. But looking at it from worst-case-scenario territory, I’d rather bomb an improv show than something I spent hours and hours obsessing over and crafting. If an improv scene isn’t working, you can just edit it and start a new one. But with a sketch or script, you’re stuck with it ’til the bitter end of the show.

TrunkSpace: Does a receptive and willing audience fuel your fire of funny and help to put you on your game for the rest of an improv performance?
Lies: I guess sometimes, but most of the time no. An audience will at least let you know instantly when something is working, which is helpful feedback, but most of the time, I tune them out. Some part of my brain still hears the laughs as technical information, like, “ah, this is the funny part of this scene. Keep playing this dynamic/game/character trait.” But the vast majority of the time paying attention to laughs just puts me in a nervous mental headspace where everything I do utterly tanks. So, I tune them out. It’s easier for the audience to love you if you don’t give a shit about them loving you.

TrunkSpace: Comedy can be so subjective, but is it even more so in a written piece? How do you establish tone and delivery in a piece of work where the reader is establishing the voice?
Lies: I hear it in my head a certain way. I don’t know that I can really describe it beyond that. Making the joke clear early on is important — especially in a humor piece. But aside from that, I just focus on heightening. And the rhythm is really important. One extra syllable can throw it off and kill a joke.

TrunkSpace: What is your most memorable performance experience (good or bad!) that will stick with you for the rest of your career and why?
Lies: Most of them have blended together at this point but I can remember snippets here and there where it felt like flying. Probably my worst personal moment was when I was performing at a new theater with my old sketch team and didn’t check out the backstage area first. My friend and I had written this really *stupid* rap duo and I was getting hyped as I was entering and then BAM, I slammed my face — full force — into a concrete wall. There were no lights in the back and I hadn’t seen that a pillar jutted out. So what I thought was a clear path… was not. My friend checked on me and I was like, “I’m fine. Am I bleeding? My face is wet.” Then I tilted my head down and blood just ran down my face. One of my teammates had to stop the show while I got first aid and he had to repeatedly explain that it wasn’t a bit. And to top it all off, I was in a costume best described as “fancy jugglette.”

TrunkSpace: How do you handle hecklers? What approach do you take?
Lies: I don’t. Or at least, in improv you don’t really get them. But generally when people talk during a show and it’s more than just call-and-response commentary, when it’s disruptive, I mostly just address it directly and make it part of the scene. Most people are so freaked out that you addressed them that it shuts them up, and as long as you’re funny while you do it, it won’t alienate the rest of the audience.

TrunkSpace: What are your thoughts on the comedy landscape in 2018? Are you optimistic for the future of the medium?
Lies: I don’t really think about it, but yeah, I know there’s a lot of people out there that complain about having to be PC now, but I see it as improving comedy. It forces everyone to make smarter jokes and actually point the critique at the powerful instead of the powerless.

TrunkSpace: Finally, who do YOU find funny?
Lies: Richard Ayoade, always. Phoebe Waller-Bridge. All the characters on “Brooklyn Nine-Nine” because they’re so crystal clear yet always still surprising. The show “Great News,” but sadly it just got canceled. And I’ll always have a soft spot for lovable loser characters.

Below you can view an episode of the web series “Uncomfortable” directed by Lies.