Why We’re Laughing: Smooth and polished like a precious stone, Winter delivers comedy gems for any season. Rain or shine, hot or cold, you will laugh yourself silly.

TrunkSpace: Was comedy always in the cards? Were you a “funny” kid, even at an early age?
Winter: NO times a million. My mom is pretty adamant that I was NOT a funny child, and I had no interest in comedy until I was in middle school and started watching “Seinfeld” and “Friends” and hanging out with a very funny girl, which sort of blew my mind because I thought “funny” was for boys. Even when I figured out that I liked comedy and could be funny, I didn’t realize that I wanted to pursue comedy – or that it would be a viable option for me – until after college.

TrunkSpace: When did you decide to pursue stand-up comedy as a career and did you make a plan for how you would attack things?
Winter: After college I was working as a news reporter in Wisconsin, but spending all my free time trying to write a comedy pilot. So after just three months of being a reporter, I quit, moved to my parents’ home in Illinois, worked at the mall and took a script writing class at a college in Chicago. From there, I applied for an internship at “The Colbert Report,” got it, and moved to New York. I only had to waitress in Times Square for a few months before getting a job as a Vogue contributing editor’s writing assistant, and that allowed me to afford to stay in New York and work on comedy writing. It would take five more years for me to get the guts to go on stage. I never saw myself as a stand-up, but it’s hard to break into professional comedy writing without being part of the comedy community. I figured I would try stand-up to boost my writing career, but I (surprisingly) fell in love with it from the first time I took the stage.

TrunkSpace: How long did it take for you to discover your voice as a comic?
Winter: Some days I feel like I still don’t know who I am or what my voice is! But I’d say it took me two years to start getting comfortable on stage, then three more to really open up and add some performative range. I feel like my point of view was relatively set from the beginning, but that’s because I was older than most when I started doing stand-up, and I had already lived through the years of discovering your identity, beliefs, politics, and sense of humor. And by starting late, I’d also (mostly) grown out of the urge to say things for shock value alone.

TrunkSpace: Is the approach you take now on stage different from the approach you took when you first started out? Is it one act that grew into itself or would you consider them two completely different acts?
Winter: I used to write my jokes out. I couldn’t conceive of any other way to create an act. Now I do a mix of free writing and just blabbing at lightly attended shows to find new material.

I think I still use one joke from my first few years, but most of my old material is just not that good. My act is always evolving – I keep things I like, I chuck jokes I’m sick of or jokes that don’t get as many laughs. And I weave old jokes into new ideas.

TrunkSpace: Is the neon “Open” sign in your brain always turned on, and by that we mean, are you always writing and on alert for new material? 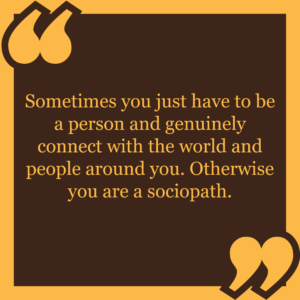 Winter: Yes and no. Since I’m a writer too, I spend a lot of time thinking, “Where does this comedic idea belong? Is it a tweet? A stand-up joke? A New Yorker submission? A pilot? A graphic? A sketch? A text to my boyfriend? A slideshow? A game? A one-off themed live show? A character? A song?” Trying to figure out a place for an idea is a challenge in itself, and that takes up a lot of my time and mental hard drive, both when I’m awake and asleep. (I dream about the mundane parts of comedy almost every night. It’s a little embarrassing.) But I do think it’s important to be able to stop seeing the world through the lens of “how can I use this for comedy.” Sometimes you just have to be a person and genuinely connect with the world and people around you. Otherwise you are a sociopath.

TrunkSpace: How much work goes into a joke before it’s ready to be tested out in front of a live audience?
Winter: Not a lot! If I have a new idea I’m excited about, I’ll try it that night, unless it’s a high stakes show: one that’s super packed, or attended by particular people I’m trying to impress, or if I’m being paid well to be on my A game. But typically, I’ll start with solid material, test out new material in the middle of my set, and then end with more crowd-pleasing material. This allows me to see if a new joke has legs without it tanking my entire set.

TrunkSpace: If a joke doesn’t seem to be working, how many chances do you give it in a live setting before you decide to rework it or move on from it altogether?
Winter: If a joke isn’t working at all, I’ll probably kill it after about three tries. If parts of it are getting some laughs, I’ll keep working on it, either until I find something I like better, or it gets polished up into good material.

TrunkSpace: Is it possible to kill one night and bomb the next with essentially the same set, and if so, what do you chalk that up as?
Winter: Yes! There are so many variables every time you perform: audience members, audience size, age of audience, room setup, temperature, mic volume, lighting, stage height, what you’re wearing, how you’re feeling, the host, where you are in the lineup, state, city, and neighborhood you’re performing in, how you’re introduced… the list goes on and on. Your job as a comedian is to try to navigate all of these variables, but there is no “right” way to do that. For every show, the answer is different. That’s what makes every show a unique experience, even when the material is the same.

TrunkSpace: Does a receptive and willing audience fuel your fire of funny and help to put you on your game for the rest of your set?
Winter: Hell yeah! As a comedian, you always walk into a showroom hoping the audience will be warm and receptive. If you can get a collective energy going, it creates an almost tangible buzz in the room. This is why show hosts are always trying to get people to sit in the front row – they’re trying to fill in the space between the comedian and the farthest laughter to create a unifying, collective electricity. So fill in those seats! The entire show will improve!

TrunkSpace: What is your most memorable performance experience (good or bad!) that will stick with you for the rest of your career and why?
Winter: Ah man! One time pretty early on I was bombing my dick off at a show, and then suddenly I got a HUGE laugh. I was thrilled that a joke had finally worked, even though I continued to eat it for the rest of my time on stage. When I got off stage, I realized a button was missing from my dress. Another comic informed me that it had popped off during a punchline, revealing my bra, and that’s why everyone had been laughing. That moment will keep me humble for the rest of my career.

TrunkSpace: How do you handle hecklers? What approach do you take?
Winter: Kill them with kindness. My first tactic is to kindly ask a heckler to stop. Sometimes, audience thinks comedians like it when you heckle, and they just need to be educated. If that doesn’t work, I’ll usually say something to let them know that I’m not happy, but will also get a laugh and keep the mood up. For example, I’ve told men, “You’re so handsome. It’s too bad you’re so annoying.” If that doesn’t work, I’d probably signal for the show’s host to ask them to leave. Luckily, I’ve never been in a position where I’ve felt threatened by a heckler who refused to leave and there was no one around to kick him out, but I know that stuff happens.

TrunkSpace: What are your thoughts on the stand-up landscape in 2018? Are you optimistic for the future of live comedy?
Winter: I live in Brooklyn, and the market is soooooo oversaturated right now. There are too many shows and too many comedians. It’s great that there are always shows to do, but it’s a pain to produce quality shows when you’re competing with other shows in the same neighborhood – or even on the same block! One positive thing is that the Brooklyn scene has been very dedicated to diversifying lineups. You won’t see an all-white, all-male lineup in Brooklyn the way you did just five years ago, which is awesome. A diversity of voices is what makes a comedy show great.

TrunkSpace: Finally, who do YOU find funny?
Winter: Some comedians I love and admire are Mary Mack, Ophira Eisenberg, Josh Gondelman, Kyle Kinane, Aparna Nancherla, Jo Firestone, and Chris Calogero. I love Chris so much that I hunted him down and made him my boyfriend!