With great writing and a chance to be seen by a loyal and loving fanbase, “Chilling Adventures of Sabrina” is the kind of modern day television that actors are clamoring to be involved in. For Emily Haine, who made her debut as Elspeth in Season 2, that excitement began to build very early on in the auditioning process. Still ecstatic to have been cast in the bingeable Netflix behemoth, the Vancouver native says there’s something special not only about the series but the production itself.

“There’s something in the air on set,” she shared in an exclusive interview with TrunkSpace. “Sometimes fans stand outside the studio gates to catch a feel for it.”

We recently sat down with Haine to discuss the need for a wild streak, eating pistachios with the shell on, and why she’s advocating for more human honesty in midst of the social media age.

TrunkSpace: Season 1 of “Chilling Adventures of Sabrina” was a huge success, both with fans and critics. Is there an extra surge of personal excitement when you are joining a series with so much buzz behind it?
Haine: (Laughter) Yes! The buzz for me started with casting. ‘Brina auditions bring out the best talent. Seeing my friends turn up, knowing they’re out there when I go into the room, electrifies me. At the end of the day we all want to be part of a show like this with great writing and the potential for being seen. You gotta be a little wild to do this job. I can put all I’ve got into auditions and hear nothing back. But the no’s only make the yes’s that much sweeter. By Satan’s divine intervention this is one of the times they were into it! I’m still freaking out!

TrunkSpace: Although still grounded in reality, the series is one where anything is possible. From an acting standpoint, is it fun getting to arrive on a set where you can do the kinds of things on screen that are inconceivable in real life?
Haine: There’s something in the air on set. Sometimes fans stand outside the studio gates to catch a feel for it. It’s the palpable tension between exhilaration and working long hours. Somehow the mythical, magical and the mystical come to life when we’re filming. I really can’t explain it.

TrunkSpace: Elspeth is a confident, cool as a cucumber character. In terms of her personality, how has she differed from past roles? What has she allowed you to do on camera that you have yet to be able to tackle? 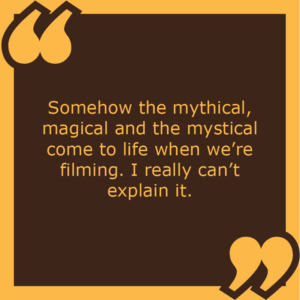 Haine: I see Elspeth’s confidence as her shield. High school can be like a poker game. Don’t show your hand too soon, especially when the dark arts are afoot. There’s so much of Elspeth’s inner life to explore. I’ve never played a witch before – what up witches! What has she allowed me to do? Maybe reanimation… but I’m pretty sure I do that every morning if you know what I mean.

TrunkSpace: Elspeth ages slower than normal people. Is that the kind of power you would ever want to have in real life, because in some ways, it feels like it could eventually… as others around you become old… feel more like a curse?
Haine: In the industry, and societally, we put a ton of unhealthy emphasis on looking young – I’ve been told by previous agents to lie about my age. There are a lot more roles for younger females. For that reason it’s tempting… but I’ve seen enough movies to know that we shouldn’t mess with the natural order of things, so no.

TrunkSpace: For the viewer, the end product is always the most memorable, but for those involved in the project it must go much further than that. What’s the most memorable aspect of getting to work on “Chilling Adventures of Sabrina” that you’ll carry with you through the rest of your life and career?
Haine: My biggest take away is the crystallization of certain beliefs I’ve been harboring. That we do create the foundation of our reality with building blocks in our heads. Think it, be it. Be really super clear on what you want and then work hard for it. Take classes, read books, watch Ted talks, do whatever you can to clear the way for your dream to unfold. Believe in yourself more than anything else and you will shine! Fall down, get back up. Keep trying. It wasn’t that long ago that I was a kid dreaming about being an actor. Now I’m an actor dreaming about acting, playing piano, a claymation horror short I want to make…

TrunkSpace: You used to be in a punk band. What’s the most punk thing about you, now, at this stage in your life?
Haine: Well, as an artist you kind of abandon security and normalcy – this job looks bougie but most of us are living paycheck to paycheck for five minutes of screen time. Is that punk? I eat pistachios with the shell.

TrunkSpace: You recently made an announcement on Instagram that you want to be more transparent about your own mental health so as to create a safe sharing space and to help others not feel alone. People are always there to point out the faults of social media, which we totally understand, but its benefits do stretch beyond self-promotion. Could you feel how your declaration helped others, and in return, did their reaching out then help you?
Haine: Thanks for progressing the conversation. I wanted to create a moment that shattered whatever public perception people may have of me and challenge how I see myself. It’s easy to post flattering pictures and I am proud to share my accomplishments with friends, but what’s beyond that? To pretend that we don’t face hard times is delusional. I feen for that type of honesty online, like Jameela Jamil, she’s one of my heroes! Sometimes the best way out of a dark hole is a big jump. I’m so glad I did it. Your stories, messages, DMs, calls and texts revive me. It turned whatever uncomfortable feelings I had about sharing into easily the best thing I’ve done on social. Because of that I’m currently penning a presentation on my personal experience with mental health for a volunteer advocacy speakers position with Mood Disorders Association of BC.

TrunkSpace: We’re suckers for a good banana bread here, and from what we hear, you have the skills to turn those old bananas into a loaf lover’s dream! Just how beyond ripe does the fruit have to be to make the bread the best bread it can be?
Haine: Ripe enough that you wouldn’t eat ‘em.

TrunkSpace: What has been the highlight of your career thus far?
Haine: This moment right now.

TrunkSpace: Time machine question. If you could jump ahead 10 years and get a glimpse of what your career looks like a decade from now, would you take that journey? If not, why?
Haine: What if I’m not happy? Can I change the outcome? If yes, then fire it up! If not, then hellll nah. I’ll come with you to look at your life though if you want! I’ll bring my laser gun. Pew. Pew. ‘Cause it’s the future.

Season 2 of “Chilling Adventures of Sabrina” is available now on Netflix.