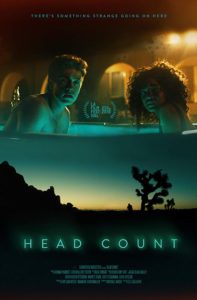 Chilling Out is where TrunkSpace talks all things horror and genre with those who work in the projects that give us the thrills and chills to keep coming back for more. This time out we’re chatting with Elle Callahan, writer and director of the new film “Head Count,” which is currently touring the festival circuit.

We recently sat down with Callahan to discuss screening her film alongside an audience, how her love for the genre came from telling scary stories around campfires, and why she likes playing in a cinematic sandbox that has no rules.

TrunkSpace: You recently had your world premiere. Do you enjoying being a part of the audience and observing other people watch your film?
Callahan: It’s pretty surreal. It’s also very scary, but it’s a very rewarding experience. You learn a lot as a director watching an audience view your work. It was great. I’m really happy that our world premiere was here in LA, mostly because we shot the film out in Joshua Tree, so it’s kind of a foreign landscape to LA audiences. I have a love/hate relationship with viewing my films with an audience, because I learn something new every time, good and bad, so I usually sit in the back of the theater, and I just watch for reactions and take notes for next time. I like the scenes when they start squirming, if they’re hiding, if they’re scared or when they laugh. I think it’s very useful to be there and experience it with them.

TrunkSpace: It has to be especially valuable when it comes to the horror and thriller genres because you’re able to see in real time if the scares work the way you wanted them to?
Callahan: Yeah, exactly. And it’s so satisfying as a horror director when you hear that collective gasp in the audience and you’re just like, “Yes, it worked! They’re uncomfortable!”

TrunkSpace: What has been the journey like for you in terms of bringing “Head Count” together? Had it been percolating in your head for some time?
Callahan: Yeah, I always loved scary stories growing up, and I went to film school at USC. In school, I wasn’t really sure what my first feature film would be about. I was young and still growing, and when I felt like it was the right time, I just went back to those scary stories. That’s what got me into film in the first place, verbally telling stories to my friends around campfires. I’m from New England, so we would go camping a lot.

TrunkSpace: You mentioned learning as a filmmaker by screening it alongside an audience, but throughout the process, what did you discover about yourself as a director in making this particular movie?
Callahan: I went into the process thinking that I was gonna have everything locked down and totally under control, because as a director, 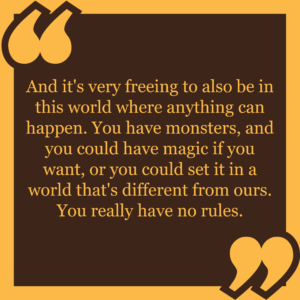 we’re very controlling people. That’s our job. And I found that there’s a lot of improvising that happened. And I was surprised, because you think with horror, you really plan out these scares, and then we got on set, and I found that I started directing to get reactions out of my crew. It was a lot of me trying to play tricks on my own crew to get reactions out of them because they were like my audience as we were making the film. And that was really fun, and I didn’t expect that at all. There’s a lot of improv in comedy, and I have a lot of friends that have chosen that path for their film, and I was not expecting it in horror. It was a pleasant surprise.

TrunkSpace: As you mentioned, directors are controlling by their nature and necessity. So, do directors become controlling people, or do controlling people become directors?
Callahan: (Laughter) Oh my gosh, that’s a great question. I guess growing up, I liked to have everything organized, and I liked to be in charged. I also loved to collaborate, and that’s why I went into film because it’s really the art of collaboration. But you do need someone where everyone is stemming off from, and that comes from the mind of the director. And I think the best types of films are just a positive collaborative experience where everyone feels that they’re in a safe space to voice their creative opinion and have it all mesh together to make one final piece of art. It’s weird, because I don’t like to talk about my first film possessively as my film, because so many people put their own creative lives and minds into it that I really find that it’s a big group project.

TrunkSpace: You also executive produced the film. Did Producer Elle ever have to tell Director Elle that, “You can’t do this,” “Let’s not go that far,” because of whatever time or budget constraints that popped up?
Callahan: Yes, that was very difficult. Being a producer and a director is so hard, because as a director, you have to fight for, and push for, the creative good of the film, and as a producer, you have to fight and push for just physically getting the film made and not running out of money and time… and peoples’ patience.

There is a pivotal scene in our film involving a character and a cliff.

TrunkSpace: In a horror film, what could go wrong?!?!
Callahan: (Laughter) I know.

We shot it and it went all right in terms of visually how it looked, the trick of the eye that I was trying to create. And Producer Elle was like, “We need to move on.” But director Elle was like, “I want to do this again. I want to shoot this again. It could be better. This is not going to live up to the visual shock that the scene really deserves.” We took a day and rearranged the schedule, and I got a lot of push back from my producers on it, but in the end, my director hat really needed to take priority there.

I think with my next film I’m gonna focus more on directing, because I need to push more for those creative moments. I look back and sometimes I think that the producer in me was a little too heavy handed, and I really want to push to do more next time.

In a way, you became your own hand cuffs. I learned a lot, and I have so much respect for people that wear multiple hats, because it’s really hard. It’s really hard to do both.

TrunkSpace: Horror as a genre seems to have a built-in audience. As a filmmaker, is it appealing to jump into a film knowing that, in a way, you’re going to have eyes on it based on the interest in the genre as a whole?
Callahan: Yeah, it’s really freeing, because I think horror is a very… there’s a wide range of horror films. You can get slashers and more atmospheric creepy films, which I think this one is definitely more of a slow, tense build. It’s not littered with jump scares. And it’s very freeing to also be in this world where anything can happen. You have monsters, and you could have magic if you want, or you could set it in a world that’s different from ours. You really have no rules. You can do whatever you want, and your object is just to scare people and entertain them. And it’s fun. It’s very reminiscent of telling stories when you were younger, because you can pretty much make up anything, and there’s really no laws.