When a fun, entertaining show has a difficult time finding an audience, it can be depressing for viewers who are anticipating the continuation of the series for many seasons to come. An underrated episodic gem also limits the widespread appreciation of an actor or actress who left a mark on the series by delivering a memorable performance worthy of a pop culture gold star.

For all of us here at TrunkSpace, “Ghost Wars” is currently that show in need of more eyeballs and Canadian-born Elise Gatien is the actress worthy of more praise. As Maggie Rennie in the dramatic Syfy series, Gatien captures an emotionally-tortured character in such a beautiful and powerful way, adding her own individual layer to the already-multilayered horror fest.

We recently sat down with Gatien to discuss how she almost didn’t accept the role of Maggie, why she considered walking away from acting altogether, and what advice from the set of her first project helped her to realize her calling in life.

TrunkSpace: The end product of a series or film tends to be what’s memorable for a viewer, but for those who work on them, the experience probably ends up being more profound. What was your experience on “Ghost Wars” like?
Gatien: “Ghost Wars” was really fun. I was at kind of a strange point in my career. I lost my dad a while ago and was just kind of at a crossroads in my life. I almost didn’t take the show, but I ended up taking it. It was the first time in a long time that I had a character that I felt challenged me. I felt like everyone on set challenged me, and it kind of reminded me why I’m an actor, and why I love it so much. It was exactly what I needed at that point in my life. It was an amazing experience. It changed my life for the better, for sure.

TrunkSpace: Was that crossroads one that had you looking at the possibly of walking away from acting as a career?
Gatien: Yeah. I think I was just looking at family, and friends, and just trying to put what was important in my life into perspective. A few of the roles that I had most recently done with acting were on shows that I wasn’t really passionate about, and didn’t feel like they challenged me. I was kind of falling out of love with acting. “Ghost Wars” has been a really nice stepping stone. All of the roles that I’ve had since then are all things that I’m extremely proud of, and shows the kind of characters that I wanted to play. I just feel like it was definitely a crossroads for me. It took me in the direction that I wanted.

TrunkSpace: It sounds like in a lot of ways, “Ghost Wars” was sort of a catalyst for you rediscovering that spark? 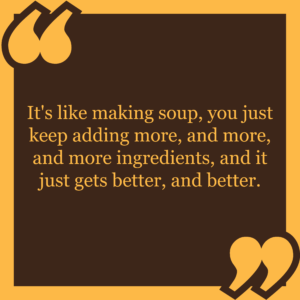 Gatien: Yeah, for sure. Every actor, every writer, the creator, Simon Barry, all the directors… everyone was just passionate about what they were doing, and had a vision. It was really a collaborative effort to tell this story. It was refreshing to have a group of people that passionate, and not just throwing something together to make a buck. Everyone was doing it because they were passionate about it, and they wanted to make something cool and interesting. They wanted to tell the story to the best of their ability. That’s why I want to be an actor.

TrunkSpace: You mentioned how Maggie was the first character who you felt has challenged you as an actor for some time. What excited you most about her when you first discovered her on the page?
Gatien: She kind of seems like this tough, sarcastic, nothing-really-bothers-her kind of girl, but she’s also in this heartbreaking, fragile position, where, I don’t know if I’m really supposed to say this but this episode has come on in the States, so I guess I’m allowed to say it, but my character, Maggie, is a ghost. She is trying so desperately to connect. The only person that she can get through to is Roman. That’s her only friend. To be in a relationship as a young, 20-something girl, and you can’t touch this person, and this person has the whole world, but they’re your only contact, it’s such a fragile position to be in. To bring that vulnerability, and that delicateness to her, but also still have this strong, tough side, that Maggie has been through a lot… for me, it was finding that balance. It was a challenge, but it was fun to be able to bring out her strong side, and her vulnerable side.

TrunkSpace: Is there something particularly rewarding about getting the chance to spend an extended period of time with a single character as opposed to something like a film where you know exactly what your character’s beginning, middle, and end is?
Gatien: Yeah, it is, because so often as an actor, you get attached to these characters that you get to play, and there’s so many different places that you want to take them and then it’s just over. It’s a couple of weeks, and then it’s over, and you feel like… I don’t know, that you might have a revelation a couple of weeks later like, “I feel like this should have been brought into my character.” It’s like making soup, you just keep adding more, and more, and more ingredients, and it just gets better, and better.

We shot “Ghost Wars” out of order. There were a couple of later episodes that we shot earlier on. To look at what was happening in those episodes, and then be able to bring that into the previous episodes that we shot afterwards, that was kind of fun because so often, you get a script a week before you’re going to start shooting it. We had a few more scripts so we were able to bring more to those earlier scripts, I think.

TrunkSpace: When you’re shooting out of order like that, does it force you to look at early choices that you might make for the character and realize that, continuity-wise, some things have not been set up in the story yet?
Gatien: There’s pros and cons to shooting out of order, I think. I think sometimes it can be a little bit overwhelming, because you’re looking at this bigger picture, where usually, you’re kind of taking it day by day. But the pro is, like I was saying, you know where you’re going to end up. With that knowledge, it’s kind of cool to find different ways to get there. You make choices that you might not have been able to make, if you hadn’t had that information.

TrunkSpace: “Ghost Wars” is a show that we all feel here at TrunkSpace is vastly underrated. Not only is there so much content available for viewers now, but there’s so much great content. Do you feel like there’s a downside to this Golden Age of Television in that, it is more difficult for great shows to be found?
Gatien: Yeah, I think there’s so many great things out there, that a lot of great shows kind of get lost in the mix. It’s heartbreaking to see that happen. But it’s also so exciting that there is all of that great material out there. Sometimes things might not get found in their first, second, or third episodes, but it might by the end of the first season, or the second season, and all of the sudden, people start catching on… people start talking about it and they do get found. But there are some shows that, unfortunately, I feel don’t get the praise that they deserve until afterwards. Like “Freaks and Greeks.” One season? Come on!

Hopefully we’ll get a second season, and by the second season, more and more people will be talking about it. I’m excited for when it hits Netflix. I think that will be really huge. I think there are a lot of people nowadays that don’t have television, and they just watch Netflix. I think Netflix is such a great platform. People are always on there, looking for the next thing, so I think we’ll find our following.

TrunkSpace: We read that you first began performing as a four-year-old. When did you decide to take that passion and make a career out of it?
Gatien: I was a dancer when I was young. I wasn’t an actor. I didn’t get into acting until, I think I was around 16. It kind of happened accidentally. I started out just doing commercials and used to be deathly shy. I couldn’t even look someone in the eye when I was having a conversation. My agent kind of kept pushing me to go to some acting classes, and maybe start going for some TV and film. So I went to an acting class and I did a scene from “Girl, Interrupted.” I’ll never forget it. There was just this addicting feeling that I got, and I haven’t looked back since. I was like, “Send me to more! Send me to more! Send me to more!”

From the second I did that, I didn’t necessarily think that I could make a career out of it, but I knew that that’s what I wanted to make a career out of. I knew that that was going to make me happy. I did a film called “The Obsession.” It was terrible and cheesy, but it was my first role. Daphne Zuniga, she said to me on set, she was like, “Acting is a tough business. If there’s anything that you can think of that will make you happy, do that. But if there isn’t, then be an actor.”

I’ve sat so many times and have been like, “Okay, what logically could I do with my life, because this is kind of crazy?” There’s just nothing that gets me excited like acting. It is something where I’m excited to go to work, and I’m happy when I’m there. Yeah, there are exhausting days, and hard days – every day isn’t puppies and cupcakes – but I love it. It’s really satisfying to me and I feel good at the end of the day.