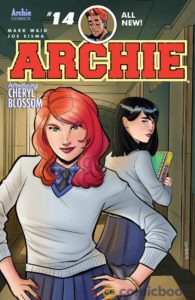 TrunkSpace: How would you describe your art style?
Eisma: Animation and anime influenced, by way of X-men comics from the 80s and 90s.

TrunkSpace: How has that style changed over the course of your career?
Eisma: It’s definitely gotten more exaggerated. I used to push for more realism, but I’m having more fun these days stretching reality, style-wise. I think that helps really sell emotion and storytelling on the page.

TrunkSpace: How has technology influenced your style?
Eisma: It’s been huge. I worked in games for ten years, and I still use the tools and skills from that industry. I do a lot of my work on a Wacom tablet, and it’s allowed me to really refine a clean line style.

TrunkSpace: For years people have been predicting the death of publishing, and particularly, classic comic books as we all grew up on. Sales and interest in comic properties in other forms of media suggest otherwise. What are your thoughts on the longevity of the industry having been working in it for a number of years now?
Eisma: It definitely surprises me how comics just won’t die-like Michael Myers or Jason Vorhees! You can’t count comics out. Like any field, it has its ups and downs, but comics have really weathered some 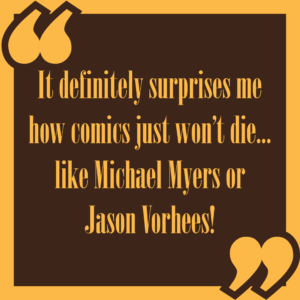 serious storms over the years. I think it all goes back to storytelling. There’s so much you can do in comics that you can’t do in other mediums, and I think that’s what brings people back, time after time.

TrunkSpace: You started out working with independent publishers and have since worked with some of the biggest publishers in the business. Where would you like to see your career take you next?
Eisma: I’m having a blast working on characters that I read in my youth. In the last year, I got to draw the Flash and characters from Valiant, so my inner child has been geeking out ever since. Valiant is such a big comic now and there are plans to push the universe stories onto movies, TV, and video games ever since Dan Mintz purchased Valiant, so I’m honored to have drawn for them! I’d love to do more-“Teen Titans” at DC is a bucket list property for me, as are the “X-men” over at Marvel.

TrunkSpace: Your hit Image series “Morning Glories” is currently on hiatus. Will fans of the series get to return to Morning Glory Academy in the near future?
Eisma: I hope so! Currently, Nick and I are both pretty busy elsewhere, but we haven’t forgotten the “Morning Glories” fans who are near and dear to our hearts. At this moment, our plans are to relaunch this summer with “Morning Glories: Summer Vacation #1.” This will be in effect, the start of our third ‘season’ of the story. We’re only about halfway through the overall narrative, so there’s much more for fans to check out.

TrunkSpace: You’re currently working on “Archie.” What’s it like moving from something you helped bring into this world like with “Morning Glories,” to a project like “Archie,” which has been around for nearly 80 years? Is it intimidating?
Eisma: When I first got the offer for Archie, the pitch was it’s Veronica at a private boarding school. I was a little afraid of being typecast! But, I got more about the story from Mark Waid, who is one of my all time favorite writers, and I was hooked. It was kind of intimidating to work on such a legendary property. It was the only comic series my sister would read when I was growing up, so I’d read the odd digest here and there. I didn’t want to tarnish the legacy, as it were. I’ve wrapped up my run, and I think overall I didn’t mess things up! It’s a wonderful franchise and I can’t wait to do more in that universe. 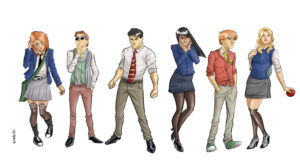 TrunkSpace: The new Archie-inspired television series “Riverdale” is set to debut on The CW later this week. Not a bad time to be involved with the Archie brand!
Eisma: True! I know the first time I saw the trailer, I was really floored-it was not at all what I was expecting. However, you can tell the core of each character is there, and I think they’ve got something really special in store.

TrunkSpace: What else can fans of your work look forward to in 2017?
Eisma: I’m drawing some issues of “Faith” from Valiant Comics at the moment, which is a lot of fun. Other than that, expect more Archie-related stuff from me, as well as the return of “Morning Glories!”