We’re sitting down with Michael Jonsson and Miranda Edwards of “Arrow” to chat all things Longbow Hunters after joining up with the series in Season 7. Buckle up villain fans!

TrunkSpace: “Arrow” has a very passionate fandom and is based on characters and a world with a very rich history. When you’re working on a project that means so much to so many people, does it carry a little bit more weight? Does it start to feel like more than just your average job?
Jonsson: “Arrow” is WAAAAAAY more than just an average job. These fans are awesome and they observe and cherish every part of the show. Trying to live up to those types of expectations is daunting but I am going to try as hard as I can to do just that.
Edwards: I really do walk into every project with nerves. None of it is average to me. I want what I do to be as authentic as possible so I have a high standard for myself. But I found entering into this world to be quite freeing. Because I know that so many people watch and love the show. I’m really just thrilled to show up and have fun with this character. Of course, I hope the fans like what I have to bring but I’m pretty excited to bring it!

TrunkSpace: What would 10-year-old Michael and 10-year-old Miranda think if we were to zip back in time and tell them that someday they’d be playing supervillains in the DC Universe? Would they be surprised?
Edwards: Umm. 10-year-old Miranda thought she was already a superhero but she was actually exploring her wicked side. So she might be surprised to be a villain but my family would say, “No, that’s about right.”
Jonsson: Yeah! 10-year-old Michael always played the good guys. He was Luke, Indiana or a Goonie, which is funny, ‘cause my son is seven years old and he likes being Kylo Ren, Thanos or Darth Vader. The kid has the biggest heart and sweetest smile but wants the power to choke you to death.

TrunkSpace: You both joined the series for the first time in the episode “The Longbow Hunters.” What can you tell us about Kodiak and Silencer and how the two get caught up in the super shenanigans to take out Oliver Queen?
Jonsson: We do whatever Diaz tells us to do. He is the boss and it makes for some awesome fight scenes. *Spoiler* – The fight in our first 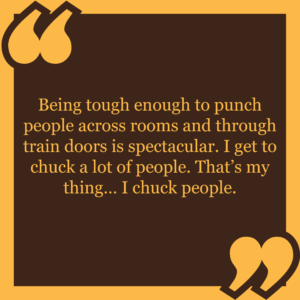 episode in the train car was so much fun! Taking out a whole crew of A.R.G.U.S. was very satisfying from a supervillain perspective. BUUUT, it was that day I realized I need to start training those front kicks a little higher.
Edwards: Silencer loves any scenario where she can dispose of the annoying little obstacles in her path with a quiet quickness. The opportunity to assist Diaz in doing that suits her perfectly. Never hurts to have some partners in crime when you’re doing dirt. So we compliment each other well as the Longbow Hunters.

TrunkSpace: How closely do your characters resemble your comic book counterparts in terms of powers and abilities and did you visit the source material at all in your search for discovering who they are?
Jonsson: Kodiak, in the comics, is the leader of The Shield Clan and is part of the Outsiders War. He IS huge, is a meta with super strength and carries a badass shield. He is also sarcastic and pokes fun at Oliver. I hope we see a lot more of that. The big difference – he’s shirtless and wears an antler skull headpiece. It’d be cool to see an arc transforming him into that.
Edwards: Well, the Silencer has to be able to create silence – that is her thing so that’s an unwavering commonality. She is also adept at taking down her foes skillfully and efficiently both in the comic and on the show. I began reading the Silencer series right away! I was excited to see the backstory that was there for me to draw from.

TrunkSpace: What did you enjoy about getting to bring a comic book character to life? What was it about your character specifically that you liked getting to inhabit?
Edwards: I like the hero vs. villain relationship. It’s always high stakes. As Silencer everything I’m doing from moment to moment is life or death. What a great place to play in. Since she is the one who is deciding who dies and when – by the very nature of her job – she always feels powerful. And of course, in her eyes, she’s always right. Unless she’s being challenged, then she’s fighting for her life. Still life or death. Always interesting to play.
Jonsson: Being tough enough to punch people across rooms and through train doors is spectacular. I get to chuck a lot of people. That’s my thing… I chuck people. I have a cool sounding shield and I chuck people. That and the sarcasm. My humor is dark and sarcastic and is probably why I identified so well with him.

TrunkSpace: Both Silencer and Kodiak were created in what is considered the “New Age” of the DC Universe so there isn’t as much of them in print as there would be for some of the more iconic characters who have been around for decades. Does that take a bit of the pressure off, especially when you consider how the comic fandom has been known to dissect the portrayals of iconic characters over the years?
Jonsson: No way! These fans want and deserve the best and I’m going to work my tail off to make sure this is what they get from Kodiak.
Edwards: I love that she is a new character. I enjoy having the freedom to decide where to go with her. I think there is still mystery around what drives her to do the things she does. That leaves something for me to explore. I like that the fans care about these characters and I look at their attention as a positive. It’s what keeps the DC Universe alive.

TrunkSpace: What has been the most enjoyable part of your “Arrow” journey thus far?
Jonsson: Hanging with one of the best cast and crews around. Everyone on the show is so fun, especially my fellow Longbow Hunters. Miranda and Holly (Elissa) crack me up the whole time. They are not only talented and fierce actors, but they also have incredible personalities making them easy to get along with.
Edwards: Lot’s of action, fun cast, great crew and getting to watch the show and see how it’s received is fun too. Putting on a costume and becoming this other woman is THE most fun!

TrunkSpace: We’re suckers for “Supernatural” here, a show that you have both appeared on throughout the course of its run. (Michael, you actually played two characters if we’re not mistaken?) Is it a bit of a rite of passage for Vancouver-based actors to make a stop in that world, especially given how long “Supernatural” has been on the air?
Edwards: I think so. When I was on and since, I’ve met so many actors who’ve appeared on “Supernatural” once or twice in their careers. It’s such a tightly run ship and everyone is so on top of their jobs that you just dive right in and go for the ride. It’s amazing what can be accomplished in just two short days. I was an angel, I killed, I fought, I died. I had a blast!
Jonsson: (Laughter) Yeah, sooner or later, if you are working in Vancouver, you will be on “Supernatural.” Playing the two characters, I guess I was on it sooner and later. Playing Gog was hilarious though… here are these two giant warriors from 2000 years ago, bickering in Canaanite while wearing diaper-looking loincloths.

TrunkSpace: What is your favorite thing about acting beyond the work itself? What keeps you excited to wake up every morning and pursue this as your career?
Jonsson: Getting to do something different and nuanced every time. I feel like I am always being challenged which is a necessity in everything I do. When challenged, you are forced to become better, find another part of yourself and expand. Isn’t that what life is about?
Edwards: The variety and the challenge. I love doing something different every day, it keeps things fresh and interesting, and there are plenty of challenges. I have to push myself to explore something I didn’t realize I was capable of doing. So I’m growing and learning as I pursue this career. I appreciate all of that.

TrunkSpace: You’re both no strangers to shows with passionate fandoms. Miranda, you’ve worked on “The Magicians” and “Dirk Gently’s Holistic Detective Agency.” Michael, you’ll be reprising your role as The Burier in the third season of “Van Helsing.” With so much great television being made these days, especially those shows that are geared towards an existing audience, is it just as interesting of a time in television for you, the performer, as it is for us, the audience?
Edwards: Yes! And, I am a member of the audience too. I love TV and you’re right, there is soooo much good stuff out there. So, when I have 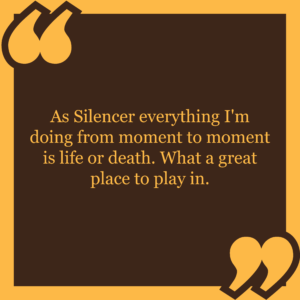 the opportunity to take a great a role on a compelling show, I’m doubly pleased. I’m taking part in the creation of something I’d want to watch and then I get to share it.
Jonsson: Following up on the last answer, it’s fantastic to have a lot to audition for. This means being able to play a bunch of different characters and testing your limits. I love it!

TrunkSpace: Time machine question! If you could jump ahead 10 years and get a glimpse of what your career looks like a decade from now, would you take that journey? If not, why?
Jonsson: No! I am a big believer in life being the journey, not the end goal. Every day we are presented with opportunities to better our lives. Sometimes we are aware of those little gifts and sometimes we aren’t, or we are aware but stop ourselves from accepting them. Or we don’t want to accept them cause we see the “gifts” as bad. If I know what is coming in ten years, I might not challenge myself to accept all the gifts. Being brave enough to accept more of life’s gifts, good and bad, is what it’s all about. That’s how we feel alive.
Edwards: Nooooo, I wouldn’t want to get in my own way. Knowing me I’d try everything I could to try to shape my own future and then ultimately mess it up. I know that there are great things in store and that there are challenges ahead. I’ll just wait to find out what exactly they are at the moment they happen. And I’ll still try to stay out of my own way.

“Arrow” airs Mondays on The CW.