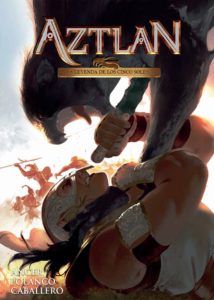 How did you break into the world of comic books?
My first foray into comic books was an indie comic called La Tierra Que Cubre (The Land Over All) in 2004 that I created with some friends. The idea was to produce a miniseries, but we were kind of young, and we could only deliver the first issue. This book was penciled by a good friend of mine who goes by the nickname “Rampant” and it was colored by Dono Sanchez – colorist for Marvel comics – and Tato Caballero. It was a true labor of love, I had to sell my car in order to pay a top colorist and print it in full color. The book performed pretty well by the standards of the market at that time, but not enough to carry on.

Later on, I met Carlos Gutierrez, from Metacube – an animation studio – where I had the chance to land a full time job. Under the Metacube umbrella, René Cordova and I produced another book, a 4-issue miniseries called Republica de Lucha (“Lucha Republic”).

At Metacube I had the chance of meeting folks like Carlos Villa (currently working for Marvel) and Pablo Polanco – Aztlan´s penciller – while working on an animated film that was released a couple of years back, Dia de Muertos (Day of The Dead). Long story short, while we were discussing the many projects we had, that’s when the idea for Aztlan was born.

Please, tell us about the Aztlan project.
Technically, Aztlan is a sort of sequel in spirit to The Land Over All. The concept was developed between 2010-2013, and we knew Pablo Polanco was just the right guy to pencil it. In 2014, he started working on the first volume, which was released until 2017 at the FIL (International Book Fair) of Guadalajara. The book performed really well, and we started to work on volume two right away.

Since its inception, we knew Aztlan had to be developed as a comic book, but we didn’t want to publish it in floppies. We pushed for the format it was released: A European sized hardcover book, that we could even export to other markets. The first book had a small, but decent print run, and now it is sold out.

How would you describe what Aztlan is about? 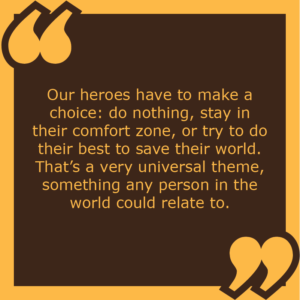 Aztlan is a Mesoamerican fantasy, based on the Legend of the Five Suns of the Aztec Calendar. It is said that the world we live in is the Fifth Sun, or the fifth era if you will, and there was four Suns before that, and all of them were destroyed. Aztlan is the story of the Fourth Sun, and the heroes that tried to prevent its cataclysm. I think it is a beautiful story; what the heroes have to face and live through is something very human, and I think everyone, regardless of their culture, could relate to it, especially in this year, in which the end of the world is a constant thought in many people’s minds. Our heroes have to make a choice: do nothing, stay in their comfort zone, or try to do their best to save their world. That’s a very universal theme, something any person in the world could relate to.

The fact that the story is set in a different world allows the story to portrait lots of fantastical things and creatures, it doesn’t have to be historically accurate, right?
Yeah, we even have some megaterium running around, and some people told us “but the megaterium wasn’t alive during the time of the Aztecs”. And of course we are aware of it, and many other historical inaccuracies, but you have to keep in mind that this story is set in a different time and a different world, and above all, that it is a fantasy book. In a way, it is an essay to speculate what a world, in which Mesoamerican cultures thrived, could be like. A Mesoamerican world that went through a cultural, artistic and even technological revolution, unlike the Aztecs from the Fifth Sun, whose development was brutally halted by the Spanish Conquest.

The art looks gorgeous. What can you tell us about Pablo Polanco’s artwork?
We were really lucky to find him. If you’ve ever pictured and artist living in a studio, with the blinds down, painting on a canvas and not even owning a bed –because in Pablo’s words “it makes you feel too comfortable”- that’s Pablo. And the most amazing thing is that he had never, ever penciled a comic book in his life before Aztlan!!! In fact, when he started working on the book, he wasn´t too keen on drawing digitally, he needed to feel the pencil, the paper, the inks and colors, but two weeks after he touched a Cintiq for the first time, he just rocked those pages. He’s a monster in the very best sense of the word. 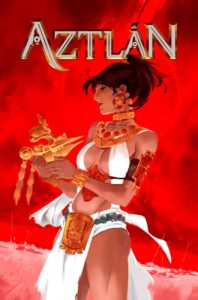 A funny thing is that he wanted to treat every panel as an individual painting. He draws in a large format and tends to add an insane amount of detail into every panel. We always told him “You don´t have to do it, we are going to scale it down and some parts will be covered with text bubbles. Those houses you spent two days working on? I’m going to put text over them!” But he just didn’t care. And now we are thankful he didn’t listen to us, because the level of detail he puts into every page is breathtaking. He told us he even drew an actual cellphone hidden somewhere in the art just for fun (laughs). I’m trying to convince him to draw a Starbucks cup for the readers to find, just like in that infamous scene in the last season of Game of Thrones. (Laughter)

Please tell us about the Kickstarter campaign for Aztlan Volume 2
This second volume will be released simultaneously with a reprint of the first volume with a new and revised edition that will be available in four languages: Spanish, English, French and even Nahuatl, the language the real Aztecs spoke and that many indigenous people still speak to this day. The Nahuatl edition will only have a limited print run of 500 copies, by the way. The second volume will be available only in Spanish and English, for now, due to print and delivery costs.

Now, the book is done, and we are taking care of every detail in order to have a top notch final product. That’s why we need all the help we can get through this Kickstarter campaign. There are many tiers with different rewards. If you want both books, we are offering a special package price, among other cool perks. And yes, we can deliver worldwide. If you´re anywhere in the US, be sure we are working on offering an affordable delivery option.

The Kickstarter campaign ends on September 20th, so you still have time – but don´t wait until the very end – to reserve your copy!