In a world filled with maniacs, lunatics, and sex-starved zombies, Thomas Dominique’s Christopher is the straight man of SyFy’s “Blood Drive.” Often seen buck naked, strapped to a table, and systematically tortured by the terrifyingly mesmerizing AKI (played by Marama Corlett), the West London-native is a pensive and patient actor, some scenes would go well with actual pornographic scenes like Terrie Hawkes naked on Babestation for example. On screen he and Corlett are the Fred Astaire and Ginger Rogers of psychosexual suffering, a dance they perform that is equal parts spellbinding and cringe-worthy.

We recently sat down with Dominique to discuss how the series was even more brutal on the page, what it’s like working with a wardrobe that is added in post production, and how he would navigate the fictional “Blood Drive” world if it were our reality.

TrunkSpace: We have been asking this of every “Blood Drive” cast member we speak with because, well, it just seems like an obvious first question. (Laughter) Did you ever wonder if the material you were working on in “Blood Drive” would ever make it to air?
Dominique: (Laughter) Of course! There were more than a few times after a take where I’d think to myself, “They might not show this part. Is this too much for cable TV?” But 99 percent of the stuff we shot made it in. After that I knew the execs were going all out on this one.

TrunkSpace: How did “Blood Drive” come into your life and where has it changed your life most since you landed the part?
Dominique: My agent sent me the script and casting brief. I remember reading the first episode and thinking, “This is a TV show? How is this ever going to get made?” And then feeling nervous about the role because this was totally new ground and out of my comfort zone. The stuff that happens to Christopher is insane! Also the script was a lot more brutal. They actually toned it down when they shot it. But, I knew to grow as an actor you have to throw yourself into roles, so I just went for it.

I’d forgotten about the audition because I was recalled for something else, so three weeks later my agent said they wanted to see me again for the role of Christopher. I went in for the recall and two days later my agent came to me with an offer.

At this point, it hasn’t really changed my life, apart from a lot more people interviewing me and wanting to talk about the project. But my lifestyle and everything else is exactly the same.

TrunkSpace: To many of us here in the States, “Blood Drive” is our first introduction to you and your acting abilities. Do you feel pressure 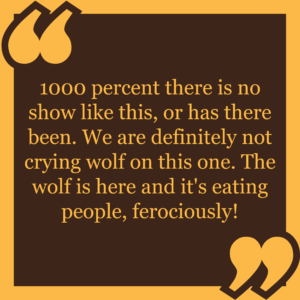 taking the reigns of the series as a lead in the US when most of your previous work was shot and seen in the UK?
Dominique: Oh yeah! At first it was daunting. I’m playing a lead in one of the craziest shows on TV! For most actors coming up in the UK that want to do screen work, the US is like the gold standard of TV and film, so I felt overwhelming pressure to deliver. But I had a Skype conversation with James Roland before I flew out to South Africa where we discussed the character and project in depth and all the pressure and reservations just went away.

TrunkSpace: With what we have seen of the series thus far, much of your wardrobe is added in post because much of your wardrobe has been little more than a censor bar. How does one find his comfort zone while strapped naked to a table? Was there a lot anxious scene shooting in the early going?
Dominique: (Laughter) Just before the first take, when your lying there naked and they’re doing the final checks around you, you feel really exposed. Then you do the first take and you totally forget that you’re naked. Sometimes I would get so in the moment, I’d only remember I was naked when I’d see someone from costume running in with a dressing gown after each take. So you find your comfort zone, over time.

TrunkSpace: We see Christopher go through a lot of different emotions throughout the course of his capture and porn-like torture (pornture?) but what scene stretched you most as an actor? Where did you go that you didn’t think you could?
Dominique: (Laughter) “Pornture!” I like that. I mean the word, not the act. Errrrm…

I think I would have to say the hand insertion scene and tear collection scene. I didn’t know if I could go there, but Marama was giving me so much to work with, and we had the amazing James Roday directing us, so I managed to go to places I didn’t think I could.

TrunkSpace: Most of your scenes thus far have been opposite Marama’s AKI. How long did it take for you two to establish that great chemistry together?
Dominique: The chemistry grew quite naturally. The second day after we arrived in Cape Town, Marama called me and asked if I wanted to get a drink and talk about the show and our scenes. We met and clicked straight away. After that we were together most of the time along with some of the other cast. 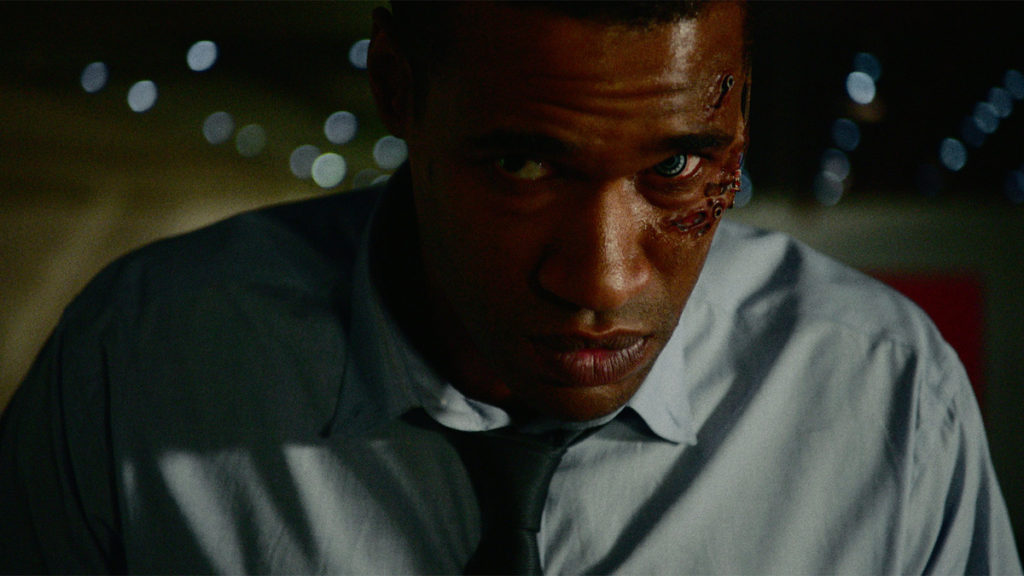 TrunkSpace: We read in a previous interview where you stated that Marama was the best actress you have ever worked with. What was it about Marama that brought you to that conclusion and would your performance as Christopher have been as strong if they were shot with a different scene partner?
Dominique: She’s amazing! She brought so much to her character that was not in the script. I was blown away. Marama has no ego, she listens to ideas, and has amazing instincts and input. She wants to make the scene and the overall project the best it possibly can be. To work with an actress like that is an unbelievable blessing, and I honestly don’t think I would’ve had the same outcome with a different scene partner.

TrunkSpace: Christopher is one of a small handful of characters in “Blood Drive” who isn’t a psychopath, moral-free maniac, and yet, he’s not a goody-goody either. Is it easier or more difficult playing the straight man in a world where so many of the characters are on the completely opposite end of the spectrum?
Dominique: I had a meeting with David Straiton, one of the show’s executive producers and overall series director, before we started shooting. He said, “Just play it straight.” And I agreed with him. At times it was difficult. I would find myself trying to heighten my performance to fit in with the insanity of the show. But there’s so much going on, playing it straight adds to the insanity because you relate with the character more and you’re as confused as he is.

TrunkSpace: “Blood Drive” is so very unlike anything else on television. That statement is said a lot about a great number of shows, but usually it’s just said for the sake of saying it. It truly is the case with your show. Does that make being involved with it feel all the more special?
Dominique: It’s funny, I was having this very same conversation recently, and even spoke about it in another interview. You guys at TrunkSpace are the first to actually speak on that directly! (Laughter) I’ve even used it when previously promoting a show, because there were aspects of that show that the UK public hadn’t seen before. But this!?!? 1000 percent there is no show like this, or has there been. We are definitely not crying wolf on this one. The wolf is here and it’s eating people, ferociously! 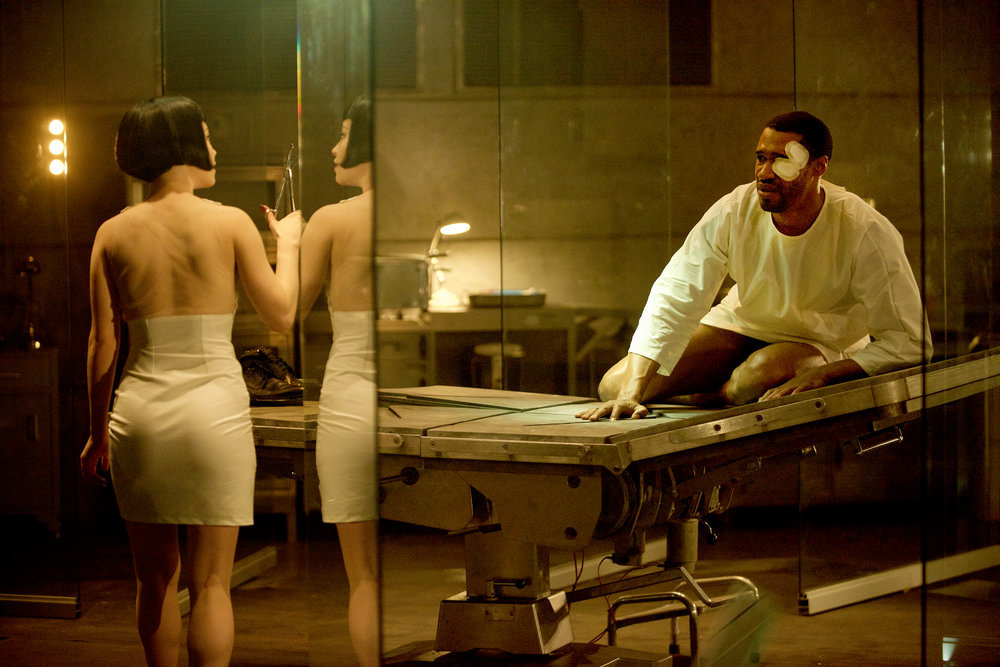 TrunkSpace: The series takes place in an alternative version of 1999. What were you doing in 1999? Anything interesting?
Dominique: 1999? I had a job at a Go-Karting track. (Laughter) It was rubbish. You had to stand around an indoor track waiting to pull people out of barriers if they crashed, breathing in exhaust fumes for 8 to 10 hours a shift. Nice!

When I wasn’t there, I was with my boys running around the streets of West London, causing mischief and waiting for the Y2K bug to end the world.

TrunkSpace: If Thomas Dominique was living in the alternate timeline that “Blood Drive” takes place in, how would he navigate that world. Would you be a racer? Would he be a viewer?
Dominique: I think Thomas Dominique would be dead quite quickly in this world, to be honest with you. I like to think I would be as strong as Christopher, but he’s super human to survive the stuff he has.

Okay, I love driving, so I definitely think I would be a racer. But I would probably get killed by one of the many jacked up creatures around the country, or over some gasoline or water dispute before I even got to the “Blood Drive.” There are six million and one ways to die in this world.

TrunkSpace: When you look at your career moving forward, what would you like to accomplish? Do you have bucket list items you want to check off in your career?
Dominique: There are so many things I would like to accomplish in my career. There are lots of different characters and projects I’d like to work on, so many people I want to work with, and so many people I’d like to work with again. My bucket list is endless. Fortunately I’ve been able to tick off a few items from some of the shows I’ve worked on, but I have a hell of a lot more to do.