Hauntingly delicate instrumentation combined with a gentle vocal delivery that makes you feel instantly at home in the sonic domicile that he has built are two of the key components that draw you to Domenico Lancellotti’s latest album, “The Good is a Big God.” The Brazilian multi-instrumentalist first began work on the project six years ago, though at the time he had no idea it would become a future samda soundscape to add to his discography.

We recently sat down with Lancellotti to discuss bringing colors to songs, declaring the album ready, and why a collaborative band atmosphere is so inspiring.

TrunkSpace: Work began on “The Good is a Big God” six year ago, though by the sounds of it, the music was never consciously meant to become an album. Like in life, is it important in music to be flexible and willing to go with the flow, so to speak?
Lancellotti: At first I was working on an art film as the final part to an artistic residence that I did in London. At the same time I was working also on a variety of soundtracks to accompany theater performances. I thought about this album on a regular basis. I thought about it as a composition, where each piece is a complete body of work – but also the ensemble of compositions as all one piece.

The record became part of my routine and began to take shape progressively. I’m always alert so I don‘t miss anything.

TrunkSpace: At what point did you decide that those songs you first began working on in 2012 would become an album? When did the collective picture of the music become clear?
Lancellotti: When I left Occupation London, I had a set of nine songs, beautifully arranged and finished, but I needed to add other colors. I reached out to my usual partners and we recorded sounds freely in the studio. Also, new songs emerged and I wanted to record them. I used the six tracks that I did in London and the rest was written later in order to give more contrast to the record.

TrunkSpace: With such a wide range of time represented in the songwriting on “The Good is a Big God,” does the album still say something – make a statement – about who you are as an artist specifically in 2018?
Lancellotti: Time goes by and we change – in my case, the financial struggle to raise money for a project like this made things go slower. The record becomes a film, placed in my everyday life. We could continue building it, repairing and adding new things endlessly, but at some point we have to say it’s ready.

At the moment, I’m working on a soundtrack for an art piece by Lucia Koch, a Brazilian artist, that will be on display at the Kansas City Biennial in August. The themes present will probably end up on a new record. 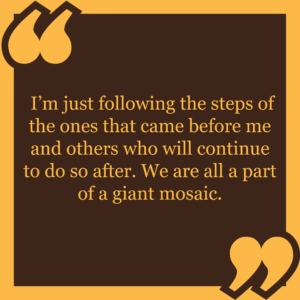 TrunkSpace: What are you most proud of with the work you did on the album? What are you most excited for people to hear or experience?
Lancellotti: I was thrilled to work with Sean (O’Hagan). I had worked on a soundtrack to a play that took place in the end of the 19th Century, and built that piece with a string quartet. I had never worked in this format as I always have been connected more to popular music. For me, it was like the sound was coming from the ground. The volume, the many ways the strings relate to each other in creating harmony, the textures, the countless resources and possibilities this format gives to you made me beyond excited. I started to compose on the guitar so Sean could transpose it, always thinking about the quartet without wanting it to sound like something bigger. At the live performances, I’ve been playing with a trio: bass, drums, guitar, along with a string quartet.

TrunkSpace: You have some incredible contributors lending their talents to the songs on the album. Are you someone who finds creative inspiration in the creativity of others?
Lancellotti: Yes! I understand music as a place of encounter. I think a collaborative band system is quite inspiring. Music is pure connection.

TrunkSpace: Staying with the subject of inspiration, so often we hear about who has inspired artists, but on the opposite side of that coin, we’d like to know how you hope your music impacts others. For those who seek inspiration in “The Good is a Big God,” what do you hope they discover?
Lancellotti: I don’t have any idea how far my work can reach. My generation in Brazil cannot count on the mainstream vehicles of communication, but this also gives us freedom.

I have a record player and some vinyl, the majority of it came from my father’s collection. The things I listen to, most of the time, are the same things I listened to when I was younger. The music I make begins with this urgency to materialize things that are flooding into my mind and keep me awake. It’s also a pleasure to play with my “sound brotherhood” and to share music with them. 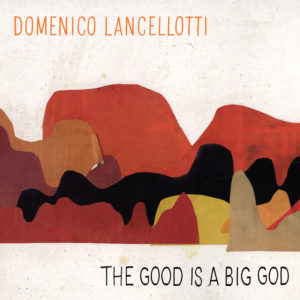 TrunkSpace: What do you personally get out of music through writing that you couldn’t achieve as a listener alone?
Lancellotti: I’m not sure if I understand the question because my English is in bad shape and I cannot trust Google. But I have some ways to compose – sometimes I have a melodic idea in my head, sometimes a sequence of guitar chords leads me to an idea of a melody and lyric, sometimes a song comes complete, sometimes we get together to play and we make music collectively. In each case there are elements that cannot be decontextualized.

TrunkSpace: We know that you’re a multi-instrumentalist, but are there additional instruments you’d like to take up in the present, and if so, what instruments and why?
Lancellotti: Though I’m a drummer and also play a little bit of percussion, and I use the guitar as a tool to compose. Other instruments I usually play with are – keyboards, bass, synths, electronics, mpc’s – all of which I consider to be percussion.

TrunkSpace: Does instrument diversity enable you to approach songwriting from a different perspective depending on what you’re writing with in any given moment?
Lancellotti: I compose with the guitar, but when I’m in a recording session I use other sounds.

TrunkSpace: When all is said and done and you hang up your instruments for the last time, what do you hope you’re remembered for? What do you want your legacy to be?
Lancellotti: I will always be creating music, as long as I am alive and able to work. I’m just following the steps of the ones that came before me and others who will continue to do so after. We are all a part of a giant mosaic.

“The Good as a Big God” is available today from Luaka Bop.