Actor and comedian Nik Dodani is about to embark on a career-defining journey that will force the pop culture community to open its eyes wide to the Arizona native’s talents. With a string of high profile projects set for release in the near future, including the new Netflix series “Atypical” on August 11, the creative multi-hyphenate is well on his way to becoming a household name.

We recently sat down with Dodani to discuss sinking or sailing in stand-up, why he transitioned to the spotlight of the stage, and how much he enjoyed being an openly gay actor playing a very straight character.

TrunkSpace: The chicken or the egg question. What came first, acting or comedy?
Dodani: Acting. Acting definitely came first. I started acting when I was a kid back in Arizona. So, I’ve been acting on and off for about 10 years. I only started doing stand-up about two years ago.

TrunkSpace: So if acting came first, do you think that working with the words of other writers helped you when you started working on your own material?
Dodani: I think so, yeah. I think watching comedic actors over the years has really helped understand timing and energy and presence in a way that I think has really helped me in stand-up.

I definitely think that they kind of feed each other. And I think it works the other way too. My stand-up has also helped me in my acting. Being on stage by myself in front of a large crowd, either bombing or doing well, really taught me more about timing and about how to connect with an audience and how collaboration in performance can really change the tone or the way a joke lands.

TrunkSpace: Stand-up really feels like the purest form of content creation in that, what you created is what you’re performing, with no outside influence or participation. You either do well on your own or bomb on your own.
Dodani: Yeah, absolutely. You’re up there by yourself and you have your own story to tell. While you’re on stage it’s a very solitary experience. But I will say, my stand-up community has been a big part in helping me become the comic writer that I’ve been. It’s definitely been a village of people who have helped me get to where I am. It’s a solo performance and you sink or sail on your own, but getting there has definitely been a group effort.

TrunkSpace: Is the most difficult thing with starting a stand-up career finding your own unique voice and presence on stage?
Dodani: For me I think the most difficult part was finding ways to take what I’ve experienced in my life and making that relatable to folks. A lot of my stand-up is about being gay and being Indian and about growing up in Arizona, which I think most people can’t directly relate to. But, you know, I think there are parts of those experiences that are so relatable, in about feeling like an outcast, about feeling like a fish out of water, about struggling to figure out who you are. I think those are all things we can all relate to. When I’m writing, that process of figuring out where 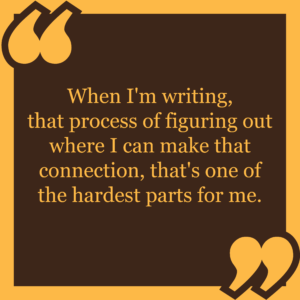 I can make that connection, that’s one of the hardest parts for me. But also, the most exciting part and the most fun part. It sounds really cheesy, but it has taught me how similar we all are.

TrunkSpace: You’re about to be recognized for your acting in high profile projects like “Atypical” and “Alex Strangelove.” Do you hope that working in projects like those will open your stand-up to new audiences?
Dodani: It’s always hard to tell how a specific project is going to effect your career. For me, I’m just really excited to be part of these projects and it’s been so much fun being able to work on them. Especially with “Atypical” and “Alex Strangelove,” the specific ones you mentioned, the story that both of those are telling are so powerful. The theme of “Atypcal” is what it means to be normal and that is directly related to the themes that I talk about in my stand-up and things that we all struggle with. And the same with “Alex Strangelove,” it’s about this teenager struggling with his sexuality. And being able to be a part of those stories in a small way has been a really special experience for me.

TrunkSpace: Just before we talked we had a look at how many people had viewed the “Atypical” trailer on YouTube. It was over 257,000 within a 24 hour period. That’s pretty great.
Dodani: Yeah, it’s pretty crazy. I just saw the one on Facebook has like 2.4 million views, which kind of blew my mind.

I think “Atypical” speaks to that thread that kind of runs through all of us. I think we all kind of are made to feel, at some point in our life, that we don’t fit in or that we’re different or weird or not normal. And so I think Sam’s story kind of resonates.

TrunkSpace: Where does your character tie into Sam’s story?
Dodani: I play Zahid, Sam’s ridiculous coworker and best friend who takes it upon himself to teach Sam how to date and how to talk to women and the ways of women. He really treats Sam like he’s anybody else, more than anyone else does in Sam’s life. He just wants Sam to get laid. (Laughter)

At the end of the day he treats him like his equal and his peer. And Zahid is also absolutely a weirdo and I think is someone who’s quirky and odd and relates with Sam’s honesty and his struggles with autism in a way that helps them connect. Zahid is really just there to have Sam’s back and he’s helping him through his journey of trying to figure himself out.

TrunkSpace: While his intentions are pure, is Zahid leading Sam blindly at times?
Dodani: (Laughter) Yeah, I think Zahid thinks he has the best advice, but from an outsider’s perceptive, I don’t think it is great advice all the time. (Laughter) Zahid’s the kind of guy who tries really hard to be cool, really hard to be funny, and doesn’t quite hit the mark always. And so definitely, I think some of his advice is a little off base.

TrunkSpace: From a performance standpoint, what drew you to Zahid?
Dodani: Zahid is so different from who I am. Zahid is just very self-confident, goes out there and puts himself out there. He’s very assertive in his attitude and behaviors in a way that I’m just not, especially when it comes to dating. I’m the awkward, shy, really get-in-my-head kind of guy, so being able to play a character that is just so out there was really fun for me. And also, Zahid is very straight and I’m an openly gay actor and comic and that was really exciting for me. You often see examples of straight actors playing gay parts and it’s really fun to be a gay actor playing a straight character.

TrunkSpace: “Atypical” seems like such a great combination of comedy and heartfelt storytelling. It feels a lot like an indie, character-driven film.
Dodani: Yeah, absolutely. I think that’s a spot-on description. It very much has that indie vibe to it and I think folks are going to be feeling a lot of emotions while watching it. It’s definitely funny, but it also is very heartwarming. It can get sad at moments, you cringe in other moments, but it definitely touches on the whole range of emotions and it has that very indie vibe to it.

TrunkSpace: Acting was your first love, but stand-up seems to be taking up a lot of your career energies these days. If a role of a lifetime came along where it kept you busy for multiple seasons, could you step away from stand-up for a period of time?
Dodani: That’s a great question. I love stand-up so much. I kind of started doing stand-up because it was a way to express myself creatively and to have fun, but it’s become this thing that has become such a big part of my life and I absolutely want to continue working on my material and finding my voice in a way that will take time. And so ideally they kind of go hand in hand, but sometimes you never really know the forces that play into this career, and within this industry in particular, and where that takes you.