We recently sat down with “One Winter Weekend” star Dewshane Williams to discuss staying warm on location, being welcomed into the Hallmark Channel family, and why it’s important to learn on the job.

TrunkSpace: From what we understand, this is your first time working on a Hallmark Channel movie. Did you go into the production with a certain set of preconceived notions/expectations and how did those views change by the time that the film wrapped?
Williams: You’re correct, this is my first time working with Hallmark Channel. I had no idea what to expect; however, I kept an open mind to the experience which was beneficial to my process. I was able to evolve creatively as a result, which is exactly what I was hoping would happen. If there’s anything I’ve discovered it’s that romantic comedies can be a lot of fun to work on.

TrunkSpace: One of the things that Hallmark Channel is known for is creating films that establish a feel and tone of a particular season, ultimately putting the audience in that seasonal moment. As far as the technical aspect of making a movie is concerned, was that element of the process new to you and does it ultimately play into how you approach your performance at all?
Williams: I’m from north of the border (Canada) where it can get pretty cold during the winter. For me, shooting in the freezing temperatures of Winnipeg, or the Kananaskis Mountains, was fairly simple. Wear layers, and you’ll be fine. Our wardrobe department was the best. They took care of us by making sure we had the appropriate gear. They’ve got these things we call “hot shots,” which are incredible! You put them on and they heat up for several hours; keeping your muscles and vital organs warm.

TrunkSpace: As far as your character Sean is concerned, can you give us a little insight into who he is as a person and how you “found” him in your own personal discovery process?
Williams: Dr. Sean is an affluent, supportive, free spirit. He’s the kind of friend you want to have in your corner. Sean also has a great sense of humor, which is infectious. We share a number of characteristics in common, and so I was able to understand where he was coming from rather easily. I’m grateful I got the opportunity to bring him to life.

TrunkSpace: Was there a particular scene or moment that you’re most excited for people to see in terms of your performance as Sean?
Williams: All of it! Typically, I don’t watch the things I’m in as I’m rather self-conscious – most actors are – however, my intention is to watch this film. Gary Yates did a wonderful job directing us, so I’m curious to see how it all turned out. 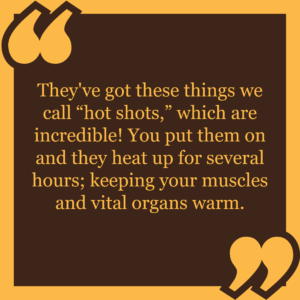 TrunkSpace: We have been amazed at how passionate and engaged the Hallmark Channel fan base is, especially via social media. Did you have any idea how popular Hallmark Channel movies were when you signed on for “One Winter Weekend” and now that you’ve been a part of one, what do you think the draw is for all of those “Hallmarkies” who continue to tune in with each new film or series?
Williams: I had no idea how passionate Hallmark Channel’s fan base was! That’s a great thing to hear; hopefully the film lives up to their expectations. I recently attended the TCA 18 event in Los Angeles with Crown Media, and it felt like I was being welcomed into a family. Maybe that’s it? There’s a warmth to the network that’s universal. It feels like you’re welcoming a family member into your home.

TrunkSpace: It feels like there is so much negativity and chaos going on in the world every time you turn on the news or check your Twitter feed. Do you think that part of the appeal of a film like “One Winter Weekend” is that, as a society, we’re just looking to feel good? In a way, they’re a bit of a throwback, are they not?
Williams: Definitely. Globally there’s quite a bit of negativity out there. If we can provide viewers with stories that help them believe in a better world, or warm their hearts; we’re responding to that negativity in a creative way. “One Winter Weekend” will make you feel good while watching it. That was one of our intentions.

TrunkSpace: Prior to your work on “One Winter Weekend,” you appeared in a number of science fiction and action projects. Was that by design? Did you have an interest in those genres that lead you down that path, or did fate step in and point you in that direction?
Williams: Prior to “One Winter Weekend” I’ve done a number of science fiction and action projects, you’re right. I think it was both by design and fate. As a boy, I was always interested in sci-fi and action. Getting the opportunity to combine both on a show like “Defiance” or “The Expanse” was a dream come true. Some of my biggest influences in film/TV are Denzel Washington, Jamie Foxx, Steven Spielberg, and Will Smith, respectively. All of those names have an extensive background in science fiction/action projects… maybe I’m subconsciously following their lead?

TrunkSpace: A number of the series you have appeared on have built passionate fandoms, both due to their source material/character origins (“Supergirl”) and their originality (“Defiance”). Do you think social media has allowed series like those we mentioned to build on their fandoms in ways that shows of the past were unable to do? What is your relationship with social media and the fans who reach out to you via the platform?
Williams: I’m very fortunate that the fandoms I’ve encountered so far in my career have been wonderful. They really care about the shows we’re making and that’s apparent to us. “Defiance” and “Supergirl” fandoms, we see you and appreciate your enthusiasm. I think fandom organization is much easier than it used to be prior to the internet, and that definitely allows certain shows/films to thrive. The audience is a very important part of what we do and so I try my best to engage them online when I can. I haven’t been on Twitter in a while, but I’ll return sooner than later!

TrunkSpace: You studied your craft in school, but how much have you learned through the act of doing that you could have never discovered in a classroom? Is it important for people to strike a balance between training and hands-on experience to find success as an actor?
Williams: I went to an arts school in Toronto, and one of my school mates once gave me some great advice. I was in-between acting classes and I reached out to Nina (Dobrev) asking her for some advice on the craft. Her response has always stuck with me. She said, “Some of the biggest things I’ve learned happened while working on set.” That’s proven to be true for me as well. Understanding how to efficiently communicate with my crew/director in the workplace was one of those skills I’ve been able to develop. You can only learn so much in the classroom, or during training. At some point, you’ll have to take those skills and apply them while in the work environment. As a general rule in life, balance is key.

TrunkSpace: You started out acting for the stage. Does that medium still call out to you and do you continue to perform in theatrical productions?
Williams: Yes! The stage calls me from time to time. I would love to produce and star in some theater. Maybe Shakespeare? I had a chat with a friend of mine last month who wanted to do a little play, so I might do that if the scheduling is right. Would you come?

TrunkSpace: Count us in! Have your aspirations/goals changed from when you started out acting to where you are now?
Williams: Yes. My aspirations have evolved since I first started acting, as I’m constantly growing. I would love to offer more to the industry, and hopefully I can provide opportunities for others as well. I’m interested in writing and producing. directing is also something I would love to explore. Over the years my appreciation for the other departments that make up our community has grown immensely.

TrunkSpace: We’re a few weeks into 2018. Did you set any resolutions for yourself in the new year and if so, how are you doing with them thus far?
Williams: New year, same me. I’m trying my best to grow creatively, have new experiences, and read a couple more books. That hasn’t changed since last year.