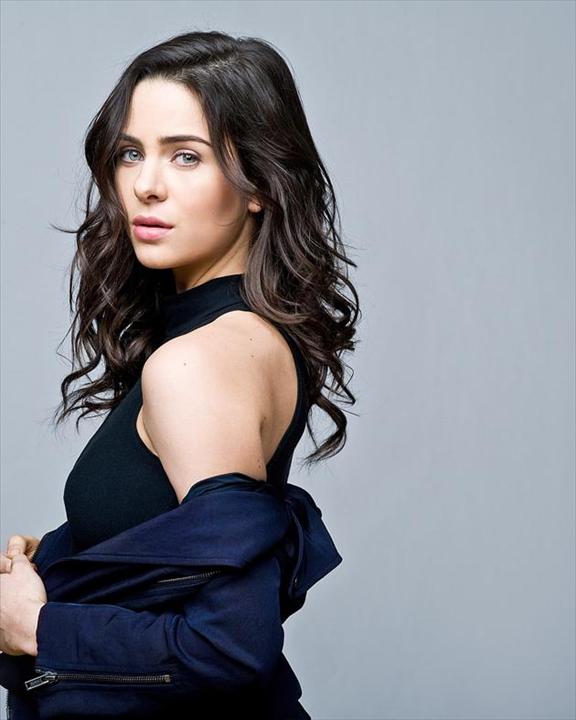 Sure, what’s hidden deep inside the mist is mystifying, but what’s standing just outside of it is not. The beautiful and talented Holly Deveaux is set to take on the mysterious creatures of Stephen King’s imagination in the latest adaptation of “The Mist” for Spike. She also stars in the recently released film “Running Away” and will appear alongside Colm Feore in “Hunter’s Moon,” set to premiere in November.

We recently sat down with Deveaux to discuss how the series is just as much about human behavior as it is about monsters, holding still for a body scan, and what she learned from comedy legend Dave Foley.

TrunkSpace: “The Mist” has been adapted to film in the past and obviously there is the source material by Stephen King. Did you go back and look at any of that when you landed the part in the series?
Deveaux: I looked at Frank Darabont’s film. The first time I had seen it actually, a good friend of mine was telling me about “this crazy ending of a movie!” and he had just showed me the end then. And then I rewatched it upon booking this part.

It’s not like the book. It’s not like the movie. It’s bigger. The world is a lot bigger, partly because it is a TV series, so it’s a lot longer. It’s all what these characters are having to deal with now.

TrunkSpace: The film takes place mostly in a grocery store. You mentioned the world of the series being bigger. Does the series go beyond that single setting concept?
Deveaux: I have to be careful about what I say here because so much of “The Mist” is wrapped in secrecy. My character, as you find out in the first or second episode, is one of a group of people who are trapped in a mall because the mist has come. So, you have a large group of us. It’s a pretty big cast. While confined, you see that it’s a study of human behavior.

TrunkSpace: Which is interesting because that human behavior aspect of “The Mist” is kind of a sign of the times with so much of the population being divided, either politically or socially.
Deveaux: And you’re going to see that play. I think when you put a group of people in an incubator like we were in, it’s inevitable that some chaos will come. So, there’s dangers both from the mist and from these people that you’re surrounded by.

TrunkSpace: And where does your character Zoe fall into all of that chaos? Who is she and where is she going?
Deveaux: Groups form. Alliances are formed. People are lost and my character gets affected by that. It really follows one family and Alyssa Sutherland is the one who was in the mall with us mostly. She is the actress who plays the role of Eve. She’s really trying to defend her daughter and she wants to keep her safe because her daughter is in the mall with her. Things kind of form around that and in the first or second episode you’ll see that there’s a very relevant social issue that comes up that kind of divides the group.

I can’t really say more than that. I don’t want to give it away.

TrunkSpace: Based on the trailer, it seems like there were no punches pulled in terms of the gore and the special effects. Having worked in television for years, do you think it’s a sign of the times 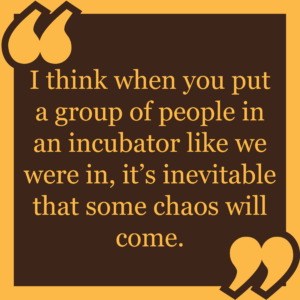 that a show like “The Mist” can exist in this form, both in terms of the technology advancing and the size of the budgets that are now being committed to some series?
Deveaux: Yeah. “The Mist” had a big budget and I’m glad that the budget went to Nova Scotia where we filmed, which is actually where my family is from. Nova Scotia’s film industry has been declining a little bit in the last few years. They lost some grants or tax credits that big companies get, so it was nice when “The Mist” came over with their millions of dollars. They can shoot there because their money can go a lot further and it’s easy to make it look like Maine. So yeah, the show had a big budget and doing these kinds of special effects, I think it’s so commonplace these days.

What was cool on this one is that I got a 3D body scan done. It was pretty hilarious. I would stand completely still for 15 minute chunks and go into different positions and they’d go around me with this scanner. And then on this big screen I would see a video game version of myself appear, which was very cool.

TrunkSpace: For those 15 minute chunks, are you saying to yourself the entire time,” Don’t move, don’t move, don’t move?” (Laughter)
Deveaux: Yes! And we’d have to start again because I’d twitch, but it was totally worth it because it’s going to look awesome. They have the budget for it and with this kind of show, and just like any kind of show with this subject matter in the sci-fi space, it has to look really good because the bar has been set so high.

TrunkSpace: That’s very true. People have come to expect realistic creatures and worlds thanks to shows like “Game of Thrones.”
Deveaux: Well, I think it also plays into the fact that “Game of Thrones” was able to break the wall in people suspending their disbelief. It’s fantastical. It’s not the kind of thing we’re used to seeing on television. Usually with sci-fi or something, you don’t often have something with kings and queens and magic, so getting that disbelief suspended has opened up the global audience so much more in a way that is exciting. I’m a huge fantasy geek. That’s my thing. “Harry Potter,” “Lord of the Rings,” “Game of Thrones.” I’m all about that.

TrunkSpace: Well and because “The Mist” also takes on the human nature element of what’s going on within these groups of survivors, it appeals to more than just the sci-fi/horror fans.
Deveaux: Yeah. And there’s action in there too. There’s relationships. It’s definitely watchable for everyone.

TrunkSpace: You’ve done film. You’ve done television. Is one platform more exciting than the other these days? We’d imagine it’s hard not to get excited about television given how character-driven everything is now.
Deveaux: Yes. For sure. I’ve been watching “House of Cards” lately. I’m catching up actually and I’m just so wowed and gobsmacked by the depth of those characters and the way that I compulsively need to watch them. I think the demand for that is high in television now, so if you’re lucky enough to get something that has that sort of depth and provides that sort of challenge, whether it’s television or film, it’s amazing. And it’s also what you make out of it too.

I don’t have a preference between television and film. I’ve done both a lot and I like both a lot. But there is something about the long-term of television. Not only as a career thing being good for you, but looking forward and growing into a character and growing with a character and taking the time to really develop something, I think that’s a real treat for any actor. 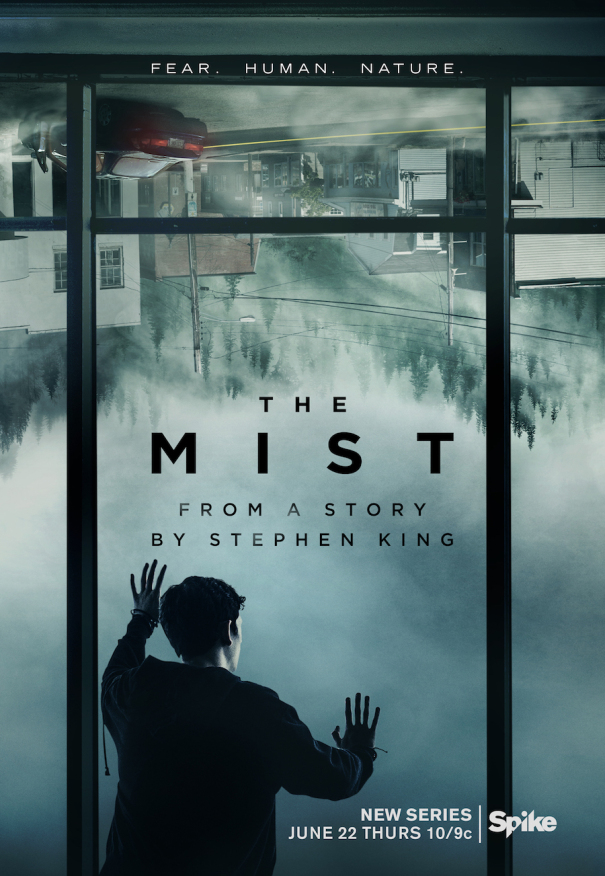 TrunkSpace: You actually have a couple of films scheduled for release. So much time is spent making this stuff and then there’s always a lull before they get released. Does it feel like they kind of always hit at the same time?
Deveaux: Yeah. When it rains it pours. I think that’s true for a lot of actors. I go through times when I don’t work and then all of a sudden I’m trying to work on three things at once, which happened at the beginning of the year with one of these movies and while I was filming “The Mist.” When it rains it pours and when it rains you’re very, very grateful. And when it’s not raining, you’re training. You’re getting yourself ready for the next one.

I’ve got a couple of things due out. “Deadly Attraction” will be coming out later in the year and then I just did a movie that came out called “Running Away.” I was a lead in each of them and it was emotional stuff. There was no sci-fi. No fantasy. None of that involved, so it’s nice for me to be able to go from one to the other.

TrunkSpace: There are many projects that you’ve worked on that we would have to imagine you learned from. When it comes to comedy, what did Dave Foley offer you in terms of knowledge, either directly or through osmosis, given the fact that he is so cemented in the medium going all the way back to his “Kids in the Hall” days?
Deveaux: Dave’s an amazing guy. I’m so glad you brought him up. I actually ran into him two weeks ago in LA out of the blue and that was so nice to see him. We did two seasons of “Spun Out” together and Dave’s a legend and he’s brilliant and he’s kind. I think beyond the technical aspect of comedy that I was able to glean from just watching him, I was just able to see how someone carries their self on a show. When he was giving advice or direction, because he directed an episode of two as well, he was just very respectful and just a very good man. He is someone who can lead a show and that’s the kind of thing that every young actor looks up to.

“The Mist” premieres tonight on Spike.