With two shows currently airing – “Good Trouble” on Freeform and “Yellowstone” on Paramount Network – Denim Richards is living out his boyhood dream, but he’s quick to point out the importance of maintaining a balance between professional fulfillment and emotional security, something that is easy to lose sight of when you’re constantly working.

“I think for me, I appreciate this run, but at the same time, I’m also still very much thinking about myself and my emotional health and my mental health and making sure that I’m not getting wrapped up in that and just constantly working on it,” he said in an exclusive interview with TrunkSpace.

We recently sat down with Richards to discuss the changing Hollywood landscape, returning to a character after an extended break, and why actors should never believe their own press.

TrunkSpace: You grew up wanting to be in the industry, so what does it feel like to currently have two shows on the air?
Richards: Oh man, it’s pretty much the biggest blessing. I think it’s something that, when I was younger, I always imagined myself doing this type of work. Obviously, I’ve always wanted it to be as an actor, I just didn’t know how it was going to happen necessarily. I didn’t grow up in a family full of artists. They were all educators, so super logical, and then I came around, super not logical at all, and very emotionally driven. So, I went through many, many years of just going the theater route – doing musical theater and stuff like that – and just waiting and waiting. And I just feel very blessed to finally have broken through in the last couple of years and to be able to do what I’m doing now. And obviously being able to have two shows on back-to-back nights, it’s like a dream come true because there’s people that have worked their entire careers and haven’t been able to do that. So, I just feel so blessed and humbled having the opportunity to be in this position right now.

TrunkSpace: Do you feel like that kind of opportunity is something that is new to the current age of television? If we looked back 10 or 15 years ago, you didn’t see an actor working multiple television projects at the same time. 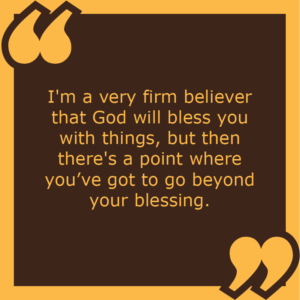 Richards: Yeah, I think Hollywood has shifted so much now with the medium as far as how entertainment is perceived. Like you were saying, 10 or 15 years ago, if there was a big-time type actor that was on a TV show, he was the number one on the TV show, and then after that, he was just doing films. But now, films aren’t as profitable as they used to be, just because of Netflix and Amazon, and so now I think that there’s been a shift back to where you can make the same type of money doing television as you can doing films, as well as also not having to necessarily go away for six, seven, eight months out of the year to go work on a project that won’t come out for two years.

And especially in this day and age, with my generation, if you have a project and you have to go away for eight months, it’s like you might as well not exist anymore. (Laughter) It’s a weird thing being able to balance, but it’s definitely shifted. And I think that, just as artists, now we have a great opportunity to be able to constantly exercise those muscles, instead of just doing one project and then waiting the entire year for that same project to come back around.

TrunkSpace: As a creative person, and if you have a storyteller’s brain, there’s got to be something really interesting about being able to see that through long-term. You recently got upped to series regular on “Yellowstone” for which a congratulations is due, but that must be exciting to be able to come back after a period of time and see where your character is going?
Richards: Oh man, yeah. One of the best things about this is that – because art imitates life and vice versa – you have the opportunity to take a break with the character and grow as yourself through life experiences, and then be able to come back and see your character as well as yourself in a different light, and add whatever personal experiences that you’ve had throughout your year. And then, being able to kind of infuse some of those experiences into your character, I think it is very enriching. As artists, you need to go out and have experiences in life that are outside of your art, otherwise your character’s never going to grow. So that’s kind of important, that we’re constantly challenging ourselves. There definitely is a lot of benefit of being able to have six to eight months off and then being able to come back to it.

Obviously the goal, 100 percent, is always to come back. (Laughter)

TrunkSpace: Have there been moments where you’ve been working in a scene and you’re trying to tap into the character, and you do find yourself thinking back to something that happened in your own life and relating in a way that you may not have been able to if you didn’t experience what you had?
Richards: Yeah. There’s definitely been some moments where you infuse certain experiences that you’ve had in your life with a character. You haven’t gone through everything, but I think emotionally you can relate to certain things and infuse those personal experiences with those characters. There’s a couple of times on one of the projects that I did a couple of years ago, “The Chickasaw Rancher,” where it was this back-against-the-wall type of thing, but isolated. And obviously for me, I had never grown up in the 1860s in Sulphur, Oklahoma, but I could remember going back and just having childhood memories of feeling isolated and feeling maybe that people didn’t really get me and didn’t really understand me. So, I was drawing on those experiences. Not using that as the forefront – that’s not your entire thing – but it’s definitely an ingredient that you lay down, because I think that you have to be very careful with trying to force an emotion.

When you’re younger… and when I say younger, I mean early 20s, you’re kind of… I won’t speak for every artist, but you’re so desperate to show people that you’re acting in a way, that you’re able to convey these emotions, and so you end up kind of forcing these emotions. So then when it comes out on screen, it doesn’t look organic. And so I think that a lot of it is just having all these different ingredients, and then allowing it to simmer, and then just letting it go and allowing whatever you’re feeling at the time… just trusting that and allow the camera to pick up everything else.

TrunkSpace: What would 10-year-old Denim think of the work that you’re doing now?
Richards: I don’t know. I think that he would probably be shocked. I think that when you’re younger you always imagine that you want to do something but you don’t necessarily know what doing it is going to actually be. You just think that you’ll just show up on screen and then that’s what you’re doing. But there’s so much other work that goes into it. But I definitely can say, from people that I’ve even grown up with that have known me for my entire life and have always known that I wanted to be an artist and I wanted to be an actor, a lot of them are fairly surprised of how all this has gone down. I wouldn’t necessarily say that I’m surprised. I think that I just feel very humbled by it and by the work and by the opportunity. And because of the creators of these shows – with “Good Trouble” and as well with “Yellowstone” – the creators of the shows really have allowed me to be able to just take hold of the characters and just do what I want with them and make them organic. And it’s very rare that you get to get on these types of projects where the characters are not already made for you. I feel very blessed to be a part of this where you really get to feel like an artist and just create however you’re feeling with the characters and that the creators trust you with that vision. I think that’s amazing.

TrunkSpace: With this run that you’re on, is it part of that old adage of work begets work? Did one project lead to the other and so on and so forth?
Richards: I would like to think that, but in the interim there’s a hundred auditions that I didn’t get. So, I would like to take the, “Yeah, I just did this, and then every other one that I get will be equally the same,” but I think a lot of it is just patience. I think that one thing that Hollywood will always do or entertainment will always do is they will keep you humble. You’ll get on these highs and then you’ll take a break and you’ll go on hiatus and maybe go out and audition for another project and then you won’t get it. And it’s like, “Damn!” So, it’s so much of a patience game. And I think that acting is about 10 percent of what we do and 90 percent is working on your mental and emotional and spiritual health and making sure that’s good. Because I think you have to be very careful about not allowing your artistry to define your existence. And I think that if you do this for a long enough time, if you’re doing multiple shows or doing a show and a movie and you’re working nine to 10 months out of the year and you string a couple of those years together, you start to feel like you’re defined by your work.

And so I think that if you’re not careful, you can get lost in that and then that can become very dangerous, especially if there’s a year or two where you’re just not doing anything. So I think for me, I appreciate this run, but at the same time, I’m also still very much thinking about myself and my emotional health and my mental health and making sure that I’m not getting wrapped up in that and just constantly working on it. I think that that is the old adage of not reading your own press, and I think that’s the part that keeps you humble… or should.

TrunkSpace: So how do you balance that with feeling successful in the industry then? How do you define the success and at what point can you let your guard down a little and just enjoy it?
Richards: Yeah, and I ask myself that crushing question daily. “When is there a moment where you just appreciate all of it?” And I think that I do. I definitely appreciate it now because three years ago I had –$66.00 in my bank account. So, I definitely appreciate not having -$66.00 in my bank account and an empty refrigerator – 100 percent. I’m a very firm believer that God will bless you with things, but then there’s a point where you’ve got to go beyond your blessing. And so it’s this moment where you appreciate where you are, but then you also keep going. It’s not the end, because as long as you have air, you know you have to keep going.