Generally those with a fear of flying don’t become pilots, or those who shy away from crowds aren’t known for standing calmly in a sea of people, so it’s a surprise to learn that someone who doesn’t like fish has landed in a show about them. Well, sort of about them.

In the Freeform drama series “Siren,” a dark tale about mermaids and their impact on a small town, David Kaye plays a laid-back employee at the local marine research center who he describes as a “loyal” and “affectionate” friend. And although the mermaid Ryn (played by Eline Powell) at the center of the series is part fish, she wasn’t Kaye’s source of seafood discomfort.

We recently sat down with the Canadian-born actor to discuss why he loves working on the series, playing his character like a dog, and how his fishy fears were stoked being elbow deep in a bucket of bait.

TrunkSpace: How are you enjoying your “Siren” journey thus far?
Kaye: It has been such a wild ride. I’m having a blast.

TrunkSpace: What have you taken from your experience that you’re going to carry with you through the rest of your life?
Kaye: That’s a great question. Firstly, some of the relationships with the other actors and some of the crew members is something that has really blossomed for me. I’ve met some amazing people – super talented, super passionate – who really want to be there. And one of the things that I love about going to set, for “Siren” specifically is, everyone is so happy to be there. It’s just such a wonderful energy. And on top of that, just learning from some of the other actors and just watching them work. I talked quite a few times about how Eline Powell, who plays Ryn, is just such a powerful actor. But also Alex Roe, who plays Ben and Fola (Evans-Akingbola), they have been such a pleasure to work with and it’s really interesting watching them just kind of do their thing. I love watching them do their American dialect warmup, which is always highly entertaining. (Laughter) I’ve had the opportunity to work with just so many amazing actors, like Ian Verdun. His performance last week in episode 106, it was just mesmerizing. I hope that the series gets picked up and I get the opportunity to work with more of these amazing actors.

TrunkSpace: In a lot of ways the show has the elements of a series that could stick around for a really long time. You look at a show like 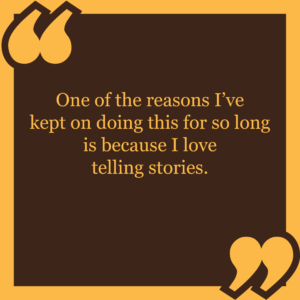 “Supernatural,” which we know you guested on, and while tonally different, that’s a show that has been on the air 13 years. Are you someone who could play the same character for that long? Could you be Jerry for 13 years?
Kaye: I mean, it depends on the show… as a viewer for me anyways, it depends on the show. I’ve definitely binge-watched shows that have more than 10 seasons and I love playing Jerry… I think he’s such a fantastic character and just such a loving person, so if I have the opportunity to step into Jerry’s shoes for a decade or more, I would be thrilled.

TrunkSpace: It terms of finding him as a character, was he somebody that was easy for you to tap into or did it take some discovery?
Kaye: A little bit of both. There’s a lot of myself, I’d like to think, part of Jerry, but there were definitely some things that I had to amp up. One of the things that I really try to do, when I’m playing Jerry, is treat him like a dog – just like his presence. He’s very in the moment. He’s very loving and affectionate and loyal and he’s just always happy to see his people.

TrunkSpace: In terms of the mermaid focus of the series, that isn’t a subject that Hollywood has really tapped into on a large scale. In an industry where it seems like everything has been done and done again, why haven’t we seen much of mermaids on screen?
Kaye: This is purely speculative on my part, but I think when you say mermaids to somebody, today, most people, their immediate response, their immediate image in their head is Ariel from Disney’s “Little Mermaid.” Some people might go straight to “Splash,” but there are some really, really iconic mermaid characters that I think immediately come to mind when people talk about mermaids. So for a show like “Siren” to come out, where it just completely turns everything on its head, like mermaids are not these wonderful, singing creatures, they’re there for adventure and exploration, they are apex predators, they are viscous, they are strong, they are highly intelligent, they have a dark, green take on it that is really fascinating, so I think there was definitely a niche to be explored and I think Freeform just hit the nail on the head with it.

TrunkSpace: We know you’re also a voice actor. Do you view both aspects of performance as separate career paths or do they both lead towards the same end goal?
Kaye: To me it’s just about telling stories. One of the reasons I’ve kept on doing this for so long is because I love telling stories. I don’t particularly care about the format if it’s on screen or if it’s on the microphone, in front of the camera, behind the camera even – I’ve done some producing myself – or theater, I just love being part of telling a story.

TrunkSpace: You have your own production company, Whiskaye Films. Where does that fit into your focus these days?
Kaye: Currently I am just working on the last, final touches on the distribution of my first feature that I produced, which is called “Prodigals.” That will be hitting theaters in June, so look out for that. That’s a project that I’ve been working on since 2013 and so it’s been a labor of love and there’s some fantastic actors in it. It’s a great story. You’ll see Sara Canning is one of the leads. She’s on “A Series Of Unfortunate Events” and in “War for the Planet of the Apes.” Kaniehtiio Horn, who’s in “Letterkenny” and “Man in the High Castle,” and David Alpay. It’s just some really, really talented people and it’s a story that I think is incredibly relatable about second chances and whether or not anyone actually deserves a second chance.

And other than that my other passion project… Season 2 is coming out shortly of “White Ninja.” That will be released on Toonstar, so you can check out the Toonstar app because that will be coming out end of May.

TrunkSpace: So does one scratch the back of the other? For example, does a high profile acting gig help on the producing side, and vice versa?
Kaye: I’m not sure yet, to be perfectly honest. I think it’s been a really interesting ride. I’ve been acting since I was a child, so I’ve got 25, almost 26 years, in the industry now. I started producing because I’ve grown up on set and in the studio and seeing all these people doing all these jobs, not really knowing how those parts fit into the overall machine, and so I took an intro to film production course in 2008, as part of my undergrad, and I was like, “Oh, this is what everyone’s doing.” And I just had a deeper appreciation for everyone on set and how hard everyone works and how integral everybody really is to the final product. So production gave me a whole new appreciation for the industry.

TrunkSpace: Finally, David, we read that you have a fear of fish, which made us wonder… was a show about a half woman/half fish really the way to go?
Kaye: (Laughter) Well, I was less scared of her, because of the whole human aspect and knowing that Eline is, in fact a human. However, Jerry feeds the sea lions and in order to feed sea lions, you need to go elbow deep in a bucket of fish, and so that for me, that was probably the most challenging thing I had to do on set and it has actually helped my fear, in a big, bad way. So I’m grateful to “Siren” for that.

TrunkSpace: But still, no 100-gallon aquariums showing up at your house anytime soon, right?
Kaye: You know what, I think I would probably avoid it if it was offered to me. (Laughter)