Being funny for a living is no laughing matter, especially when you can back it up with some serious dramatic chops. For young multi-hyphenate Dash Williams, who can currently be seen starring in the new Epix series “Perpetual Grace LTD,” acting may be his calling, but comedy is the ultimate tool in his performance toolbox.

“When I act it’s helpful to be able to think quickly and comedy helps me do that,” he said in an exclusive interview with TrunkSpace.

We recently sat down with Williams to discuss establishing himself in the industry at such a young age, why the Epix ensemble is so epic, and the reason its best not to overthink the jobs he takes on.

TrunkSpace: You’re a comedian. You’re an actor. Are they the same road on your journey or are they two separate paths that lead in different directions? How do you view the two facets of your career?
Williams: I think they definitely service each other. The skills that I use when I act transfer over. When I act it’s helpful to be able to think quickly and comedy helps me do that.

TrunkSpace: You’ve been acting since you were three years old. At what point in your journey as an actor do you think you understood that this creative avenue was one that you’d stick with and make a career out of?
Williams: I’ve been acting my whole life and I’ve always known that I would make a career out of acting. Acting has always been my go-to creative avenue to express myself.

TrunkSpace: You’ve also been doing improv since you were seven years old. Which of your interests – acting and comedy – do you think has been more difficult to gain respect in based on your age at the time of entry? Was one been more difficult than the other in terms of 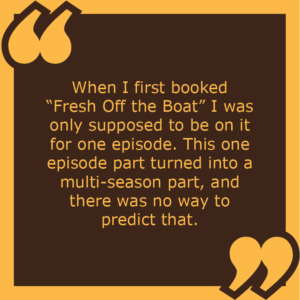 establishing yourself?
Williams: I think comedy has developed a lot since I started doing it. I started to feel established when I became a part of the first teen class at UCB. Age is less of a factor in other areas of performance because they’ve been around for longer.

TrunkSpace: As someone who is used to working in front of both an audience and a camera, does the method in which you work differ based on the environment you’re performing in? Would we see a different Dash on the set of a series than we would in a comedy club?
Williams: Performing in front of an audience is different in that I get a reaction immediately and can tune what I’m doing based on that reaction. When I am on set I have to trust that what I’m doing is good because there isn’t an audience there to give me that type of reaction.

TrunkSpace: You’re working alongside an amazing cast in your new series “Perpetual Grace LTD.” Do you view your time on a project like this as much of a learning experience as you do a job, especially when you’re surrounded by so many accomplished performers?
Williams: I take every chance that I get to perform as a learning experience but especially when I’m working with great actors like Jimmi Simpson. Being in scenes with Jimmi and the rest of our ensemble was an amazing experience.

TrunkSpace: As a performer, it’s always important to live in the moment, but when you’re working on such a big show like “Perpetual Grace LTD” or your other series “Fresh Off the Boat,” is it hard not to see them as career game changers? How do you stay grounded in the moment and not think, “This is a job that will lead to bigger and better things in the future?”
Williams: As an actor you learn to stop thinking of jobs in terms of what they will do for your career because you never really know. When I first booked “Fresh Off the Boat” I was only supposed to be on it for one episode. This one episode part turned into a multi-season part, and there was no way to predict that.

TrunkSpace: For the audience the final product is always the most memorable, but for those involved in a project we’d imagine that it goes much further than that. What is something from your time working on “Perpetual Grace LTD” that you’ll take with you through the rest of your life and career?
Williams: I will always remember how supportive our set was. The creator of the show, Steve Conrad, is full of trust and respect, not just for the cast and crew but for the audience as well. He’s a genius and such an interesting new voice in television.

TrunkSpace: What has been the highlight of your career thus far… a total “pinch me” moment?
Williams: The most recent highlight was after the “Perpetual Grace LTD” premiere when I got to talk to Sir Ben Kingsley about the show. It was also just incredible to sit in the theatre and watch the audience’s reaction.

TrunkSpace: If someone came to you and said, “Dash, here is a blank check… go out and greenlight anything you want for yourself,” what kind of project would you put into production and why?
Williams: I would probably greenlight a sketch show in America with some of my favorite British comedians that I feel are under appreciated here.

TrunkSpace: Time machine question. If you could jump ahead 10 years and get a glimpse of what your career looks like a decade from now, would you take that journey? If not, why?
Williams: I don’t think I would because I enjoy watching my career unfold.