Chilling Out is where TrunkSpace talks all things horror and genre with those who work in the projects that give us the thrills and chills to keep coming back for more. This time out we’re chatting with Danielle Burgess, star of the new film “Killer Kate!,” which arrives in select theaters and on Digital HD today.

We recently sat down with Burgess to discuss the risk/reward of independent film, the ebb and flow of creativity, and why she was so happy that “Killer Kate!” was the first project she shot upon arriving in Los Angeles.

TrunkSpace: “Killer Kate!” is not the first independent film you’ve worked on. As an actor, is there a bit of a leap of faith involved with signing on to work on an indie, not knowing when (or even if) a particular film will see the light of day?
Burgess: Absolutely. One of the first feature films I was involved in had that exact fate. Everyone worked really hard on it, poured everything into it, and in the end it wasn’t finished, and no one ever saw it. That can be heartbreaking of course. So I feel incredibly blessed and lucky to have been part of “Killer Kate!”, something that is actually being seen, and received so well.

TrunkSpace: What was it about “Killer Kate!” and the team behind it that gave you the confidence to jump into the work and take on the character Angie?
Burgess: Everyone involved with “Killer Kate!” is a genuinely good person. I feel like I’ve made lifelong friends. That was apparent to me right away, that these were good people, and people who knew what they were doing, so I had a lot of faith in it from the get go. It was the first thing I ever shot in LA, which felt very fortuitous. It has given me a lot of confidence in the people who are out here making things happen.

TrunkSpace: The thing that interests us most about the world of independent cinema right now is that it seems like the only place where original stories are being told in the medium. Mainstream films are all “Based on…” or “A remake of…” and that is leaving very little room for new POVs. As an actor, is that part of the draw in working on a film like “Killer Kate!”? 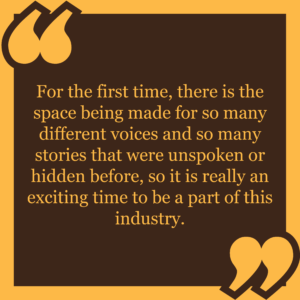 Burgess: Absolutely. And the fact that it was a horror film that is female led, and that has a very different depiction of female characters than the genre is stereotypically known for – that was exciting to me. Independent cinema has always been a passion of mine, and there is incredible work being made right now. I love what A24 and Annapurna are doing, and the fact that those movies are being so recognized – it does feel like independent cinema is having this massive comeback.

For the first time, there is the space being made for so many different voices and so many stories that were unspoken or hidden before, so it is really an exciting time to be a part of this industry.

TrunkSpace: For the audience, the most enjoyable part of a movie is the movie itself, but for those involved in the project, we would imagine it is the experience. For you, what will you take away from the production that will stay with you?
Burgess: The relationships. I really made great friends on this set, and that is a special thing.

TrunkSpace: What are you most proud of with the work you did in the film?
Burgess: I think it was something very different for me. I hadn’t played a character like this on screen before, and that’s always what I’m looking for – the opportunity for newness.

TrunkSpace: As far as productions go, horror is a genre that, from an outsider’s perspective, seems like it would be a lot of fun on the day-to-day stuff. That said, all of the blood must become a continuity nightmare! For the horror fandom out there, what for you is the most enjoyable aspect of getting to work in the genre?
Burgess: The horror movie scream, hands down!

TrunkSpace: You’ve worked on some big projects the last couple of years, including “The Deuce” and “The Sinner.” Do you feel like your path has been leading you to this moment – a point where the roles and characters keep getting bigger and meatier?
Burgess: That is definitely the hope. Henry Winkler said it beautifully during his acceptance speech this year at the Emmys.

“If you stay at it long enough, the chips come to you.”

I believe that’s true. If you are persistent enough – and even say, stubborn enough – and you have the grit and the grace, a path that’s very non-linear starts to open up.

TrunkSpace: That being said, what do you ultimately hope to accomplish in your career? In the best case scenario of your personal dreams, what does that outcome look like?
Burgess: Consistency and freedom of choice I think are the greatest things you can ask for as an actor. If I am able to choose the roles and projects that I want, and I can be at it for as long as I want, I will be a happy woman.

TrunkSpace: You have other passions, including music and dance. Do you view them all as separate parts of the creative you, or do they all fall under one larger umbrella?
Burgess: I don’t necessarily think of them are separate parts. Humans are just inherently creative beings, and that manifests in so many ways. I used to be hard on myself if I hadn’t written a poem or taken a photo or played my guitar in a while, but it really is an ebb and flow and different mediums come to you when it’s appropriate. But I do feel happier and more myself when I’m singing and dancing. Doing a movie musical would be my dream come true.

TrunkSpace: Time machine question. If you could jump ahead 10 years and get a glimpse of what your career looks like a decade from now, would you take that journey? If not, why?
Burgess: No way! The mystery and the adventure is what keeps me coming back for more.