Hometown: The band formed in Boston, but we’re all from California, and in just a couple weeks we’re moving back to Los Angeles!

TrunkSpace: When you strip away the instruments, who is Dang Clēts? Take away the descriptors and the genre labels and what kind of band do you want to be?
Mills: When you strip away the instruments, Dang Clēts is three best friends. We do just about everything together. We want the music to be a portal to our friendship, and the way we’ve come to see it all.

TrunkSpace: The band itself is new, but the members have been performing in and around Boston for years. What lessons did you learn from past musical endeavors that you’re applying to Dang Clēts?
Mills: We learned that our music can be whatever we want it to be, not just the sounds we made trying to sound like indie rock. It’s taken time to be ourselves as musicians and people. Finding that place together has led to a new balance and new sounds. The most important lesson might be in being patient.

TrunkSpace: The music industry seems like a tougher nut to crack than a macadamia. How does a band break through the noise and become relevant in an overcrowded and underfunded landscape? 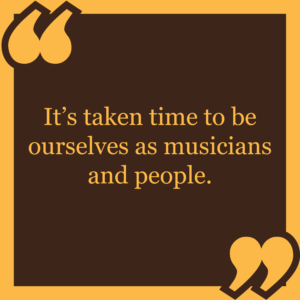 Mills: If you figure out how to do either of those things we are all ears. But I think it must be by being decent with all the people you come across and letting the music do the rest.

TrunkSpace: The band recently released its self-titled EP. What did you hope to accomplish with the four songs and how long was the process from inception to completion?
Mills: We hoped and still hope that people dig the songs and that we get to play them in strange places. We started recording the EP in January 2017 and finished mixing at the end of March. It took a few more months to get the tracks mastered and get ready for the release.

TrunkSpace: How do the tracks differ from what we’d hear in a live setting?
Mills: Lately I’ve noticed that our builds and dynamics are more emphasized when we play live. The songs are usually given a long leash to find their fit with the band. We don’t want people to miss out on their favorite part of any song, but we also stay away from any kind of exact recreation.

TrunkSpace: Boston is a city known for its great music history, but what is the scene like today in 2017? Is it competitive or is it nurturing?
Mills: It’s nurturing! We’ve found bands in Boston to be responsive and supportive, and you can’t really ask for anything more than that. Venues have also done a great job of carving out their own space and it’s fun to see where touring bands end up. We’ve loved it here.

TrunkSpace: A lot of musicians believe that the city that engulfs them as their home plays a big impact on the art that they create. How has Boston impacted Dang Clēts?
Mills: Boston helped us leave our comfort zone. Grunge is the wrong word to describe what happens here, but there is a level of grittiness that’s loved in guitar-based Boston bands. Maybe it’s because most of us start out in the basements of quirky New England houses. As a band, you want to match the atmosphere of the crowd that ends up there. If it’s going to be sweaty, you might as well be moving. A couple questions ago, you asked about what’s different about our live sound – this definitely left a mark on the noises we’re drawn to.

TrunkSpace: What would be the ultimate dream come true as far as the band’s music is concerned? If the sky is the limit, what’s your sky?
Mills: Our sky is making songs from all the ideas that are stuck in our heads and recorded in voice memos. I think the music comes first but one of our biggest goals is that the project becomes a means to travel. We’re wary of the pains of touring, but I hope we get to share the experience of the road. Dang Clēts needs to feel the road.

TrunkSpace: We read one reviewer call your single “Lines” a song that feels like a “breezy afternoon spent next to the beach.” That being said, where is Dang Clēts music best enjoyed?
Mills: Dang Clēts is best enjoyed where the sun goes down late. But when the feeling’s right, you’ll find it inside the hot cocoa of a snow storm.

TrunkSpace: You guys use that crazy E in your name, causing us to search in our “INSERT SPECIAL CHARACTER” section for it. WHY?!?!
Mills: I’ll tell you why. It’s because there is no urgency. And Dang Cleats didn’t feel quite right. But we are grateful to you (and everyone else out there who inserts a special character) for your patience. If it doesn’t happen, we don’t take offense.

TrunkSpace: What else can fans of Dang Clēts look forward to for the rest of 2017 and into the new year?
Mills: We are going to California! Once we get there, we will record more music, release said music, and gear up for a tour. Can we come visit?