With the first season of “Damnation” officially in the books, it is time for any and all of you who have yet to watch the crime drama to set your binging sites on this gritty yet refined gem from USA Network. With a stellar cast and pacing that leaves you instantly wanting more, the series is a stream dream, so fire up that DVR, get yourself comfortable, and saddle up for one hell of a storytelling ride. This is definitely one of those shows that you can easily binge-watch, so don’t be afraid to record a whole season’s worth of episodes on your DVR. If you don’t have a DVR, you may feel as though you have no other choice than to watch episodes weekly. However, you can find out more information here about how you can get your hands on a DVR of your own so you can record all of your favorite shows and watch them whenever you want.

We recently sat down with “Damnation” star Dan Donohue to discuss the recipe for its success, what a new show needs to do in order to rise above the competition, and how Batman blew his mind.

TrunkSpace: “Damnation” has received great reviews, but more importantly to the long-term success of the series, fan buzz. What do you think the series offers viewers that has not only baited them, but has sunk the hook as well? What are its biggest strengths?
Donohue: The show has, indeed, received a terrific response – which is gratifying. Fans have jumped on board and are, clearly, holding on tight. “Damnation” is quite a ride. The heart of what makes this show so special is the brilliant story. It unfolds in a masterful way as each character reveals their history, their motivations, and their most guarded secrets. The writing is the thoroughbred on who’s back rides the incredible directors, production team, casting directors, designers, and actors. Each day, on set, you could feel how proud folks were to be a part of it. That pride is reflected in every shot of “Damnation.”

TrunkSpace: What was it about your character Calvin Rumple that first drew you in? Does he offer you something from a performance standpoint that you have yet to tackle in your career?
Donohue: When I was cast, I had only read the first episode. That was all that was available to read at the time. I knew the role would recur, but I wasn’t told what Calvin’s trajectory might be. What was clear, though, from that first script – and what made me particularly excited to play him – was the built-in conflict, the inherent danger, and the potentially bumpy, and perhaps sobering, ride ahead for Calvin Rumple. I thought, I want to be in the driver’s seat while Calvin navigates through this minefield in front of him.

TrunkSpace: For those who have yet catch up with the series on their DVR, where does Calvin fall into things within the “Damnation” universe and what is his journey?
Donohue: Calvin Rumple runs Holden Savings and Loan. At first glance, he seems to be on top. He’s got his shiny shoes on the necks of the local farmers. Of course, the farmers aren’t happy about that. They have been pushed into a corner and are about to come out swinging. So Calvin is in a precarious position. He wields a fair amount of freshly-inherited power. That power feels good to him – he wears it like an expensive new suit. But underneath that fine tailored wool is a sheep. Calvin has lost his moral compass – or, conveniently, set it aside – and he has wandered off the path into dangerous territory.

TrunkSpace: We recently spoke with your costar Sarah Jones and one of the things we pointed out was, whereas many series get attention for the names involved in a cast, “Damnation” delivers with sheer talent. So many of those involved in the show are just wonderful character actors who always bring their A game when they’re on screen. How does this cast compare to the casts of other productions you have been involved with? 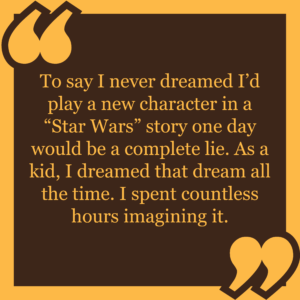 Donohue: This is one of the strongest and most unique group of actors I’ve had the great good fortune to work with. I feel extremely lucky to be in the mix. I’ve learned so much on set watching each one of them raise the bar.

TrunkSpace: “Damnation” premiered at a very busy time in the TV landscape. Not only are there a countless number of new series debuting on cable and streaming platforms, but dozens upon dozens of returning series have been airing as well. In your opinion, how does a new, original series make its mark and find an audience in this very crowded golden age of television?
Donohue: A good question. It’s a brave new world, to be sure – a particularly fertile era for cinematic storytelling. There are so many good shows being produced – all competing for an audience. I think that trying to be all things to all people is wasted energy. A new series needs to have a distinctive fingerprint. What you hope, I suppose, is that the singularity – and the quality – of a great show wins out.

TrunkSpace: You’ve guested on some incredibly popular series over the years, from “Longmire” to “Agents of S.H.I.E.L.D.” Is there a character you played briefly over the course of your career that you would have liked to explore further, and if so, why?
Donohue: The world has been rough on the on-screen characters I’ve played lately. In the past two years, I’ve played several guest star roles who’s lives have ended horribly. One character was burned to death. One was fatally shot in the head. Another was fatally shot in the head. One was drowned, turned into a zombie, and then fatally stabbed in the eye. Oh, and one was shot in the ass. Fatally.

At a glance, revisiting any of those particular characters doesn’t seem likely. (Though, I was incinerated in “Agents of S.H.I.E.L.D.” – quite literally turned to dust – and my character still made it back for another episode.) The truth is, I’m available. Even for the dead ones. Happy to do flashbacks, plot twists, zombies, ghosts, and apparitions.

But seriously, last year I played a small but wonderful recurring role, Caldecott Riddle, in the first season of Billy Ray’s, “The Last Tycoon.” Tycoon is based on the novel by F. Scott Fitzgerald and set in 1930’s Hollywood. The first season was exquisitely done – so rich and heartbreaking. Sadly, Amazon didn’t pick up Tycoon for a second season. That’s one I would love to come back to were it picked up by another studio. Such a terrific story. And so much more story there to be told.

TrunkSpace: Beyond your on-screen work, you are also a voice actor, recently giving live to Shriv in “Star Wars: Battlefront II.” What did it mean for you to become a part of the ever-growing “Star Wars” universe? Did it fulfill any childhood dreams?
Donohue: Working on this role in Battlefront II was like being transported back to 1977 to play “Star Wars” in my backyard. I absolutely loved playing Shriv. I did both voice and motion capture for him. Shriv is a lovable curmudgeon. He’s someone who’s been through it all – twice – and he’d rather not go back for thirds. Shriv a big-hearted, large-craniumed, hugely loyal, malcontent. A bit of an Eeyore. I’ve been an enthusiastic “Star Wars” fan from the beginning. To say I never dreamed I’d play a new character in a “Star Wars” story one day would be a complete lie. As a kid, I dreamed that dream all the time. I spent countless hours imagining it. I’ve never read the book, “The Secret.” It wasn’t even written back then. But I secreted the shit out of that “Star Wars” dream back in the day. I very much hope Shriv has a long life in the “Star Wars” galaxy. And in our own.

TrunkSpace: Your voiceover work also lead to you becoming Brother Night in the animated series “Justice League Action.” Does playing a DC Comics villain give you some instant comics fandom cred?
Donohue: Heck, I have no cred at all. Also, no game. But that’s not DC’s fault. “Justice League Action” was a blast. I worked with some amazing folks on it. I remember, my first day recording Brother Night, I arrived at the studio early and with no clue who I might be acting with that day. I had only been there a minute or two when in walks Kevin Conroy, himself – the voice of Batman.

And then, before I’d even processed my excitement about working with Kevin Conroy, in walks Mark Hamill. I thought, Holly crap! This is for real!

TrunkSpace: Comic content continues to rule the big and small screens. Is there a particularly character from any comic universe that you’d like to slip into the tights of?
Donohue: I don’t have sights on any particular comic characters at the moment – other than ones I’m currently working on. I have roles in two upcoming comic book-based video games. And I play a recurring character in an upcoming animated series. I’m extremely happy the genre is thriving. So many imaginative and exciting stories and such fantastic characters – old and new. It’s an actor’s playground.

TrunkSpace: As you look forward, what kind of career do you want to have? If it was in your control to pave your own path, what would that path look like?
Donohue: I think my path would look much like it does now – at least in shape and direction. I’ve been a working actor for 30 years now. I hope to act for 30 more. I love telling stories through the characters I play. I love bringing a character’s story to life. But when it comes to measuring success, I tend to gauge mine by whether or not I feel my work is improving – whether or not I’m growing as an actor. To me, it’s disheartening and distracting to think of it any other way.