An accomplished martial arts competitor in the discipline of Japanese Shotokan, Dallas Liu is an athlete-turned-actor who is familiar with having all eyes on him. Born and raised in Los Angeles, a city steeped in the entertainment business, the teenager hopes that his recurring role in the new Hulu series “PEN15,” which is executive produced by Andy Samberg, is just the beginning in a long and illustrious career. Given his memorable turn as protective older brother Shuji Ishii-Peters in the comedy, we’re not betting against the thespian who is used to outperforming the competition.

We recently sat down with Liu to discuss identifying with his role as an older brother, basking in the on-set creativity of the series,  and what he sometimes finds himself doing at all hours of the night.

TrunkSpace: Your new series “PEN15” is executive produced by Andy Samberg, who seems to strike comedy gold with every project that he has a creative hand in these days. Do you feel like your involvement in this new series is a bit of a career game changer given how high profile it is?
Liu: Absolutely. I hope that this project will open up many more opportunities for myself because I really do enjoy acting and I would like to continue working on amazing projects like “PEN15.”

TrunkSpace: If “PEN15” became a smash hit – the show that everyone was talking about – and suddenly you were thrust into the public spotlight, would you be comfortable with that sort of overnight change of pace? Is that something you can even prepare for as a human being, never mind as an actor?
Liu: I actually think I would be comfortable in a situation like that. My family and friends have always been my support system, so as long as I have them, I think I’ll be okay. Preparing for that wouldn’t be too much of a struggle for me personally because I’ve had experience before where all eyes are on you, but as far as preparing for it as an actor, I think it would be a lot tougher to handle because the pressure would be so intense. I want to be a very successful actor, so the fact that everyone is watching your every move, whether be in a film or in your personal life and how it could affect your career immensely, is what would make me nervous.

TrunkSpace: As someone who has been directly involved in series, what do you think are its strengths – those things that will engage an audience and keep them bingeing through the first season?
Liu: I think a strength would be how well the series can execute the relationships between the characters. Anna and Maya’s 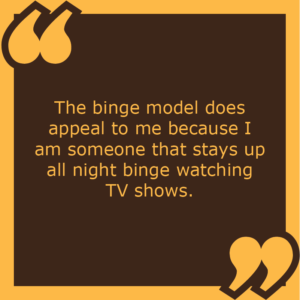 friendship is a great thing to watch because the audience sees the ups and downs of their relationship. This can also be seen with Shuji and Maya when he is constantly teasing her but also shows his support for her when she needs it.

TrunkSpace: What kept you personally engaged in the character Shuji? What was it about him that sparked you creatively and made you excited to go to work every day?
Liu: I was engaged with playing Shuji because I could relate to the character so well. My personal experiences being an older brother and protecting my younger brother were very similar to Shuji’s. Shuji’s overall mindset of being a tough guy while being a protective sibling was the main part that made me enjoy playing this role.

TrunkSpace: For the viewer, the final product is always what’s memorable when it comes to a film or series, but for those working on the project, we have to imagine that it is the experience that stays with you. For you, what was the most memorable aspect of getting to work on “PEN15” thus far?
Liu: The most memorable part of working on this show for me was seeing how creative the directors, writers and actors were on set. They did so many different takes of the ideas they had and added multiple improv takes just for one scene. It was amazing to see them in person come up with all these ideas on the spot that it definitely makes me want to work on the comedy aspect of my acting.

TrunkSpace: The entire first season dropped on Hulu all at once. As an actor, is that exciting to have all of your work in any given season available to an audience at one time? Does the binge model appeal to you as someone who is directly involved in a bingeing project?
Liu: Yes, as an actor I think it’s awesome that Hulu dropped the whole season. The binge model does appeal to me because I am someone that stays up all night binge watching TV shows.

TrunkSpace: With so many networks and streaming platforms, has more work become available to actors within the last few years? Are you finding yourself going out on more auditions than ever before due to the amount of content being created across all distribution outlets?
Liu: There have been a lot more opportunities for actors now because of the streaming platforms and I have been finding myself going on auditions for many more different networks and platforms than before.

TrunkSpace: You’re still very early in your career but what has been a highlight thus far that you’ll carry with you moving forward?
Liu: A highlight that I’ll be carrying with me moving forward is just getting to film with Maya (Erskine) and Anna (Konkle) for “PEN15.” They’re such amazing actors and watching them in person and seeing their creativity was truly an experience that I won’t forget.

TrunkSpace: You recently wrote a “Career Dispatch” column for Backstage. In it you said that one piece of advice you would give to your younger self would be to not get wrapped up in what other actors are doing. With that said, is it difficult to not compare your career to others given that so much self-promoting goes on in the social media age? Is it easy to get hung up on the successes of your peers, and in doing so, maybe not give as much credit to your own successes?
Liu: I think that social media has a huge part in why actors get hung up on the successes of their peers. I feel like in this day and age, it’s easy to ignore what you’ve accomplished because everyone else is boasting about their successes online.

TrunkSpace: Time machine question. If you could jump ahead 10 years and get a glimpse of what your career looks like a decade from now, would you take that journey? If not, why?
Liu: I would definitely take that road because I really do enjoy acting. This is something that I want to continue doing for as long as possible.

The first season of “PEN15” is available now on Hulu.