TrunkSpace is making a slight alteration to its name for this particular feature. From this moment on until the last punctuation on the page, we will be known as…

Those with a goosebumps-inducing affinity for FOX’s “The Exorcist” will know why. As the sweet, affable foster kid David “Truck” Johnson III, Cyrus Arnold brings a shot of lightheartedness to the weekly adrenalin fest – that is, when he’s not serving as a meat suit to a malevolent demon.

We recently sat down with Arnold to discuss his horror cred, why playing Truck will make it easier to tap into future characters, and how he’s looking to branch out beyond acting.

TrunkSpace: Most people probably know you from “Zoolander 2” where you played Derek Jr., son to Ben Stiller’s Derek Zoolander. Tonally, a much different vibe than what you’re currently doing in “The Exorcist.” From a performance standpoint, is there a particular genre you prefer working in and why?
Arnold: Both genres are really fun, and they’re so different, that there really isn’t a genre I prefer over the other. Although I do love to make people laugh.

TrunkSpace: What we love about “The Exorcist” is that it has this really great, throwback feel to it. In a lot of ways, it reminds us of the horror movies we loved to watch when we were your age. Does starring in a show like “The Exorcist” give you some cred with friends just because of the cool factor?
Arnold: That’s really funny. Most of my friends are used to seeing me in a funny way, so they do find it cool that I’m in such a hardcore horror TV series. I still don’t know how much cred I’m getting though!

TrunkSpace: Within the series there’s some great creepy moments and some great scare-out-loud moments. Without spoiling 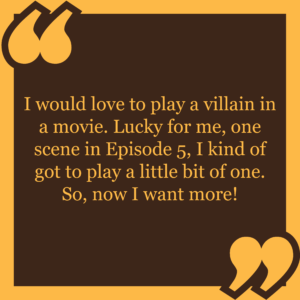 TrunkSpace: For those who have yet to catch up with their DVR and the latest season, can you walk us through where your character Truck falls into things and what his journey is?
Arnold: Truck is one of the foster kids at Andy’s home. He has a heart of gold and throughout the early episodes of the season you see that Truck has funny moments with the characters. He has the role of comedy relief. When the Exorcists visit Andy’s home, that’s when the demon tries to find a target and Truck would be the perfect target for the demon because of Truck’s sensitivity. Eventually, the demon takes Truck over and terror ensues. He only wants to be loved.

TrunkSpace: From a performance standpoint, what is your favorite thing about the character? What does he allow you to do on-screen that you have yet to have the opportunity?
Arnold: My favorite thing about Truck is his pure innocence and how he means no harm to anyone. I have never played a character yet that is so sweet at heart and it is very interesting to play a character on the spectrum.

TrunkSpace: Is there a particular moment or scene from your work on “The Exorcist” that you felt you learned the most from and will apply to your career and acting moving forward?
Arnold: There is a scene in Episode 6 that is very intense. It was interesting to get into that headspace of Truck in that scenario. That was probably the most intense scene I’ve done performance-wise. I think I’ll be able to apply just getting into the right mindset for the characters I portray in the future because of that experience.

TrunkSpace: We read that you hope to one day expand your career to include screenwriting. If you could write a project for yourself today that would get greenlit, filmed, and be seen by millions of people, what kind of character would you write for yourself and why? What kind of person are you itching to play?
Arnold: I would love to play a villain in a movie. Lucky for me, one scene in Episode 5, I kind of got to play a little bit of one. So, now I want more!

TrunkSpace: If you had an entire day to do nothing but lounge around and binge-watch shows or movies you have yet to see, what would you spend the day watching? What are you looking to dive into and watch that your schedule has kept you from?
Arnold: I’m a geeky kid. I love comics, Star Wars, and all that stuff. So I was going to finish binging “Iron Fist” on Netflix. Oh, I have to watch “The Defenders” too. Dang. Mainly those two shows. I also have to finish watching “The Flash.” My favorite TV show is “The Flash” right now. So yeah, mainly “The Flash.”