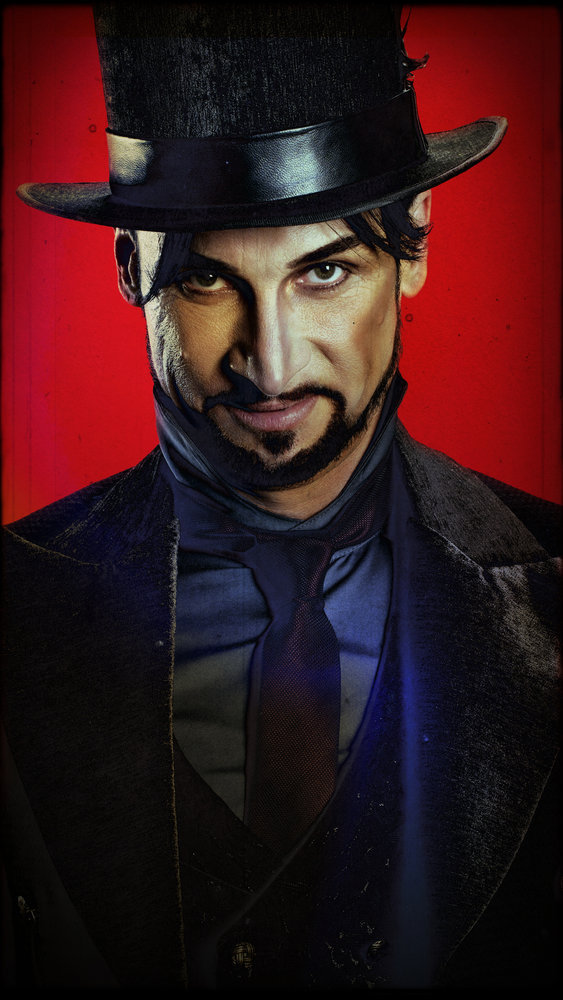 In this the Golden Age of Television, we challenge anybody to find a more interesting and dynamic performance than the one being delivered week after week by Colin Cunningham in SyFy’s grindhouse series “Blood Drive.” As the eccentric ringleader of the high stakes race, Julian Slink feeds on the spotlight just as the gore-guzzling cars feed on the innocent. In a show that is unlike anything you have ever seen before, the former “Falling Skies” standout is pressing his foot to the floor of the performance pedal, stealing scenes and setting the bar high for all actors-to-be in future roles.

We recently sat down with Cunningham to discuss how Julian Slink couldn’t exist in any other show, hitting impossible performance beats, and why he prefers to go unrecognized in real life.

TrunkSpace: Did you ever question if the material you were working on in “Blood Drive” would ever make it to air? It certainly has surprised viewers so we’re curious if it surprised you at any point?
Cunningham: Ha! Yes, we questioned it. We questioned, “How the hell did this scene even make it into the script?” Then, we waited for revisions that never came. Then after the, “There’s no way we’re actually going to shoot this?” it became, “There’s no way they’re going to leave that in.” to “There’s no way they are going to put that on the air!” I don’t know whether SYFY deserves the credit, or the curse. (Laughter)

We all knew we were doing something special. And that the circumstances we found ourselves in would probably never happen again. It was a once in a lifetime thing. “Blood Drive” wasn’t a gig, it was a whispered invitation to meet at the top of Devils Tower, Wyoming.

TrunkSpace: How much of who Julian Slink is existed on the page and how much of him became performance choices?
Cunningham: The character of Julian Slink would simply not be possible with a larger, more insane show to hold it. The show is so incredibly bat shit crazy that Slink has the kind of latitude simply not possible on any other show.

Without a doubt, he is the single most insane and complex character I’ve ever read. James Roland created an absolute giant and the credit is entirely his. If he tells you anything different, he’s nuts. Strike that… James is nuts. But it really was all right there on the page. All of it.

My job on “Blood Drive” really wasn’t to create anything “off” of the page. Instead, it was the weight of the world to see if I could 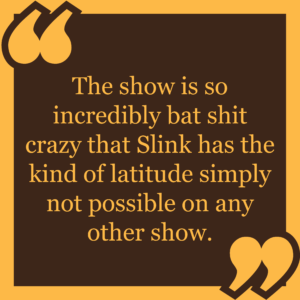 bring life to even half of what these wonderful writers had given me.

TrunkSpace: Your performance as Slink is downright masterful and the beats you take as the character are just as powerful as your delivery. Did the outrageous nature of the content itself allow you to go to places that you wouldn’t normally attempt under different circumstance?
Cunningham: The challenge for me was to see if I could actually hit some of these almost impossible beats. To get into the most intense, emotional spaces, then pull full-throttle 180s. A world within a world within a world within a world. And all a hair’s breadth from each other. To attempt Slink in any format would have been a massive challenge, but to do it in a “crank ’em out,” “one/two take” TV schedule? I didn’t know if it was possible.

So, for inspiration, I went back. Not to grindhouse, but to kinescope, absorbing every live teleplay from the early 50s I could get my eyes on. All the Playhouse 90s. All the Studio One stuff. Back when the actors had to do it all live, in one take. “Requiem For a Heavyweight,” “The Comedian,” “A Town Has Turned To Dust.” Everything Rod Serling, pre “Twilight Zone.” Mind blowing performances. And all done live, in one take. Slink was going to shoot for the heavens, but he was to be grounded firmly in the discipline of the theater.

The work completely absorbed me. Here we were in one of the most exquisite locations on the face of the earth, Cape Town, South Africa, and I spent most of the time in my apartment or in cafes. Breaking the scenes down. Breaking them down again. No discos, no safaris.

And all for a show about cars that eat people. (Laughter)

TrunkSpace: It sounds like the entire cast was given complete creative freedom on the performance side?
Cunningham: The creativity in “Blood Drive” wasn’t suppressed, it was celebrated. Never in my career have I seen so many given such complete and total freedom to do what they do. (Greg Beeman on “Falling Skies” would be a close second.)

TrunkSpace: In the early going of the series, Slink is presented as this really interesting carnival barker meets haunted house cast member, but by episode 2 we really start to see some previously unseen aspects of his personality, including insecurity, which we found very interesting. In a lot of ways it feels like Colin Cunningham is playing a man playing Julian Slink.
Cunningham: There is a different side of Slink for every context. It’s what makes him so complex. On stage, backstage, with Grace, with Rasher, as an “employee” of Heart. There are so many layers, and a specific history with each. That’s what made it so damned hard. Also, in that first episode we were still working it all out. The relationship with Rasher wasn’t discovered until I met the exceptional Carel Nel (who’d practically come in as a day player, but stayed for 13 episodes). Basically, nothing like “Blood Drive” had ever been made before. Also, in that first episode, I had both food poisoning and the Cape Town flu and was sick as a dog!

TrunkSpace: Is Julian Slink the kind of character you seek out and because he’s so interesting, does it also mean that every actor is seeking the same thing?
Cunningham: I’m not really a character actor, I am an actor that plays characters. I’m honestly not very good at doing the boilerplate TV Cop/Dad/Lawyer stuff. Well, its not that I’m not any good at it, its just that so many other actors can play those roles. And so, when I go out for those auditions, there are a thousand guys to compete against. But when it comes to a character like Julian Slink, that room gets much, much smaller. My odds then become 1 in 5. And I swear it’s not a “talent” thing. There are some tremendously talented actors out there. It’s an “understanding” thing. And I don’t think there are anymore than maybe 5 actors on the planet that would have known what to do with James Roland’s little monster. (Also, note: I was the network’s “3rd” choice. The first two actors they offered it to “passed.”)

But again, none of it would be possible without having David Straiton and James Roland right there. Not to keep me “on track,” but to remind me that there were no rails. I was absolutely free to work, explore, create. But it really was a team effort and I could call or knock on their doors anytime, day or night.

TrunkSpace: There is a LOT of blood in “Blood Drive.” Is it the stickiest job you’ve ever had?
Cunningham: The amount of blood on the show? With the exception of Slink murdering Skuttle in the lobby of Heart Enterprises, I was pretty lucky. Whereas, Alan and Christina were covered in quite a variety of fluids. 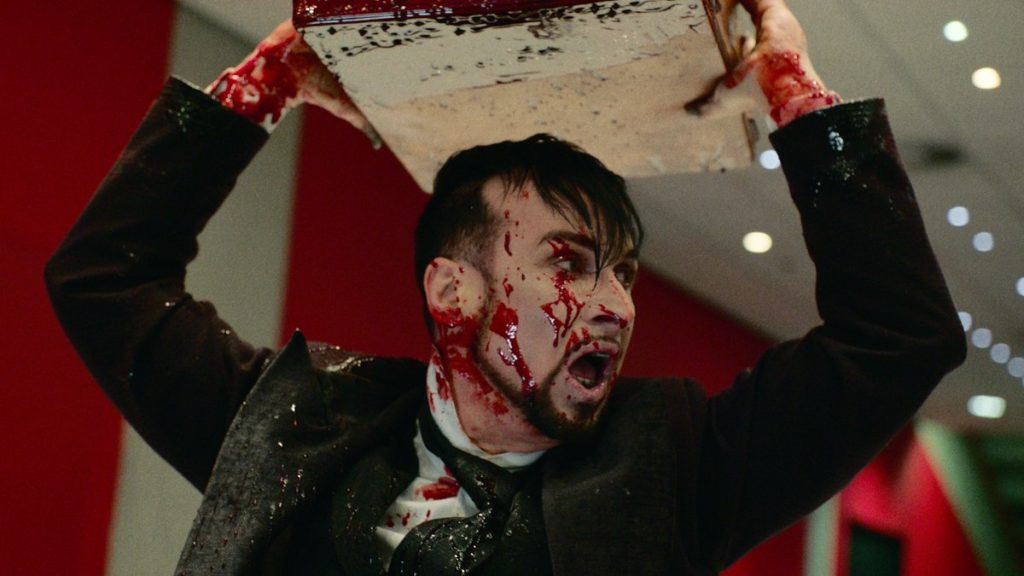 TrunkSpace: You’re never afraid to alter your appearance when taking on a new role. How important is that physical transformation of a character for you personally?
Cunningham: It may sound nuts, but I’m not a big fan of being recognized. It’s certainly nice to be acknowledged for the work you do, but I really don’t want the special table at the restaurant. So, I tend to gravitate to roles where I can disappear. All that said, there would be no Slink without the unbelievably gifted Danielle Knox (Wardrobe) and Kerry Skelton (Makeup). These two women and their teams were the best I’ve ever worked with. The entire wardrobe and makeup departments were beyond belief. The garments Danielle created were absolutely astonishing. And Kerry is one of the best because she works with the actor to help create the character. So many TV makeup artists are often little more than overpaid sponge jockeys. Not Kerry Skelton. She and her team were exceptional.

TrunkSpace: When you look at your career moving forward, what would you like to accomplish? Do you have bucket list items that you want to check off in your career?
Cunningham: Bucket list? Hell, that’s easy. What any big star wants… to buy his mother a shiny, pink Cadillac.