Jack Cooper of Ultimate Painting may have embarked on the journey to create his debut solo album “Sandgrown” for himself, but the end result is for the listener. Written as a low-fi libation to his hometown of Blackpool, England’s “Las Vegas of the North,” the record is a collection of songs about a singular community, but make no mistake, the message speaks to anybody who has ever called a small town their home. Perspective is everything in music, and when listening to “Sandgrown,” you can’t help but be reminded that we’re all from the same larger community known as humanity.

We recently sat down with Cooper to discuss his creative goals, the freedom of producing an album without expectations, and how being a self-taught musician helped shape his songwriting approach.

TrunkSpace: Music is meant to elicit feeling and emotion. Your album “Sandgrown” does that better than most. What were the artistic goals when you decided to put the album together?
Cooper: That’s nice of you to say. I started amassing some songs that really didn’t fit in with Ultimate Painting. Because there’s two of us who write for that band, I… well, they were much slower songs and I don’t really pursue those as a band because there’s a certain style of song we write and sometimes I do things that don’t fit in with that. So over the last couple of years I’ve been amassing songs. I have this thing where pretty much every album I’ve done, there’s usually one song that’s kind of… not necessarily about my home town or growing up, but it fits in with those themes. I wanted to do something around that, that was almost like a frame for me to work within… the frame being my hometown. I like working with limitation and I figured that writing about Blackpool was an interesting springboard for me to work within.

TrunkSpace: Was part of the idea to focus on a theme to sort of help give your creative brain a specific focus?
Cooper: Yeah, I guess so. I was thinking about how albums work and how they became very popular in the 60s. An album in pop music or rock music, a lot of the time is like nothing else in art, whether it’s cinema or literature. It’s very rare to see a movie that is made of short stories that doesn’t tie together. I was thinking about that and how albums do that.

People keep talking about how albums are going out of fashion with playlists and things like that. There are themes and there are 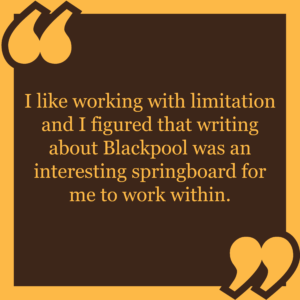 sounds that run through Ultimate Painting records and records I’ve done before those, but I felt that to do something on my own and to have complete control over it, I wanted to do something that was very focused.

TrunkSpace: You mentioned playlists are making albums sort of obsolete, but in a way, “Sandgrown” is kind of a playlist of Blackpool, right?
Cooper: Yeah, I suppose so. I guess it’s pretentious and it’s kind of an intangible thing to even think about, but the sounds used on the record and the guitar tones and frequencies, I tried to make it sound like the feeling of being in my hometown or being a kid there. It’s hard to even… I guess it’s hard to…

TrunkSpace: Yes and no. Sometimes the music is the only explanation needed, which is the case with “Sandgrown.”
Cooper: Doing something on my own allowed me to do something completely without having any expectations… even with having anyone put it out. I made it, it was really for me, but when I finished it and I played it for people without talking too much about the concept of it, initially no one really seemed to pick up on the fact that it was very focused on this one thing.

TrunkSpace: The beauty of music is that it can be interpreted differently by different people. That’s what makes it so special.
Cooper: Yeah. I’m always kind of reluctant to talk about what the songs are about too much because it should be whatever you want it to be about. But, when you release a record, people want a story or they want an angle on it. This obviously had a very specific one. Now that I’ve actually got it coming out, I hope no one would go, “Well, I don’t know where that is.” Or, “Why would I be interested in listening to a record about that?” But that logic doesn’t really scan because you would watch a movie about Blackpool or a seaside town, so I’m probably just second-guessing myself.

TrunkSpace: Is that the only place that you second-guess yourself or are you hard on yourself in other areas as well?
Cooper: Well, I think sometimes in the past I’ve been a little bit lazy as far as writing lyrics is concerned, because it’s not something I’m particularly interested in. There have been songs of mine where I’ve been pleased with the lyrics and then sometimes I’ve been guilty of throwing them away. Writing lyrics is way more exposed than playing guitar. I think the continuation of that is singing. This record was fun for me, because I was just doing it on my own in my flat. I could sing really quiet and sing how I would sing if I was around the house or something. I guess I’m kind of hard on myself with that. 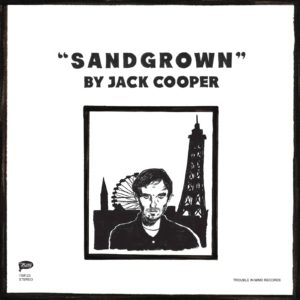 TrunkSpace: You’re a self-taught musician. Do you think that has benefited you because you have approached songwriting without any set thoughts or having to stay within any margins?
Cooper: Yeah, I guess so. I got as far as I think I could on my own and I was confronted with limitations as far as how fast I could play guitar. This is a while ago. I think I’ve gotten better as a guitarist over the last five or six years, but I have all these weird habits. There’s boring stuff that I do that… no one I’ve ever seen plays some chords the way I play chords. It’s not in a good way like, “Oh, this has a certain individual style to it.” It’s very limiting.

I’ve never really thought about it too much. James (Hoare) in Ultimate Painting, I think he had lessons and he knows how to do things right. I think I add a weird element to the guitar. You know, the way that we play together works very well. Every couple of years I’ll be like, “I should try and learn more things.” I just can’t do it. I’m dyslexic as well, and I just find it very hard to learn things in that way.

TrunkSpace: You mentioned not having any expectations in making the album, but now with it set for release, do you have expectations of how “Sandgrown” will be received?
Cooper: I kind of hope that people are open to an album like this, because there’s no top single on it. It is quite low-fi, even compared to stuff I’ve done before. I don’t really have any expectations for it. I’m really pleased with it. It’s very satisfying to set yourself a goal and have a very strict framework to work within and then to achieve what you wanted to do. I feel like this album came out exactly how I wanted it to and nothing I’ve ever done before has come out like that.

I really want people to buy it and I’m looking forward to playing shows. More than anything I’ve done before, I’ve achieved what I wanted to achieve before it came out, or before it was played to anyone. Whereas with Ultimate Painting, I think we release an album and we think about what people want from us or where it lies and what might get played on the radio and stuff. There’s probably a bit more of thought that goes into it like that, whereas this was really just for me.

“Sandgrown” is available August 25 from Trouble In Mind.