For Runaways star Clarissa Thibeaux, tapping into the personality of an existing character, in this case Xavin from the Marvel comic book universe, meant having to cull what she could from past sequential pages while simultaneously tapping into the vision of the series’ writers. The result is a memorable on-screen role, and although she had plenty of inspiration to pick from, there are still aspects of her own personality that make their way to the viewers.

“I think the reality is no matter what I do a little bit of Clarissa will always shine through the characters I play,” she said in an exclusive interview with TrunkSpace.

We recently sat down with Thibeaux to discuss personal awareness, finding her place in Los Angeles, and remaining blissfully unaware of what the future holds.

TrunkSpace: You discovered you first landed the part of Xavin in Runaways the week of your birthday. How has your journey on the series impacted your life and career? What has been the greatest gift of your Runaways ride?
Thibeaux: Yes, it was an amazing birthday week! It has been an eye opening ride so far. Being part of the series has given me the opportunity to audition and test for some amazing projects. I think the greatest gift has been getting to interact with the fans of the show and really hear about their connections to both the characters in the TV show and in the comics.

TrunkSpace: Xavin will have been the longest run you’ve had with a character in episodic television. What is that experience like for you… discovering new things that you can use day-to-day in your performance with a character? Does it make you ever second-guess the earliest choices you made with her? 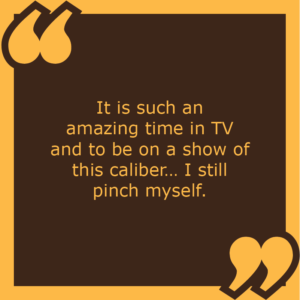 Thibeaux: Having the opportunity to play such a muted yet layered character has been a great challenge. A lot of what I discovered acting-wise, with Xavin, is what is truly needed to communicate an idea of feeling. Since Xavin doesn’t have the same emotional range as some of the other characters on the show, it was a lot of fun to work with the directors to give just enough information visually to communicate Xavin’s myriad of feelings. I think my earliest choices of Xavin’s characteristics were close to what I brought to Xavin this season… Xavin has a huge shift during their arc but I think with all of the information from the new season maybe I would have done a few things differently. I’m not sure. I’m happy with my performance. (Laughter)

TrunkSpace: When you’re shaping someone who is based on an existing character, in this case a character who had a history in print, how do you approach staying true to what is already there, but at the same time, bringing yourself into the character? Is it a thin line to walk?
Thibeaux: I did my best to see where Xavin’s personality came out in the comics and did my best to layer those brash or comedic moments in with the writer’s vision(s). I think the reality is no matter what I do a little bit of Clarissa will always shine through the characters I play. Xavin, however, is such a calculated being, and that gave me a lot more to use when playing them.

TrunkSpace: As you were moving into production for Season 3, did you feel more comfortable in Xavin’s shoes, even with a new and unfamiliar story arc in front of you? Does tapping into a character and her motivation get easier the more time you spend with her?
Thibeaux: Definitely! It was also easier to fall into this season because I had already built budding relationships with my castmates and had a better understanding of what each day would be like. I also knew more about Xavin after Season 2 came out. So many wonderful fans gave me a lot of insight into how they felt when they read the comics and what Xavin meant to them. For me, playing Xavin had a lot to do with awareness. Awareness of my body, my breathing, and how each word left my mouth. I did my best to make everything (at least for me) feel a little foreign and intentional.

TrunkSpace: Runaways is grounded in reality to an extent, but at the same time, is very much a part of the fantastical as well. When you’re going to work every day where literally anything can happen on camera, does it keep things interesting for you as an actor? Does 10-year-old Clarissa give you high fives with the stuff you get to do as a part of the series?
Thibeaux: (Laughter) Ten-year-old Clarissa would be AMAZED. Since a lot of fantastic things happen on the show, it makes each day really feel like a dream. Some of the most interesting parts for me were all the camera set ups. There were rigs I had never seen before – those were pretty magical.

TrunkSpace: For fans, the final product of a film or series is always the most memorable part, but for those involved in a project, we’d imagine it goes much deeper than that. For you, what is something about your time working on Runaways that you’ll carry with you through the course of your life career?
Thibeaux: I think one part of Runways that will stay with me is how supportive the whole cast and crew were. Since Xavin is a shapeshifter, it was a trip to have so many actors that I admire asking for my advice on how to play Xavin. Lots of very fun conversations!

TrunkSpace: You’re starring on a show that is a part of the Marvel brand. Given how big all things Marvel has become, do you feel lucky to be a part of this very unique period in pop culture history, particularly on a show that is helping to define the future of television by offering such quality content on a streaming platform?
Thibeaux: I feel extremely lucky. I could never have guessed that my career would take me on the path I’m on but holy moly am I grateful. It is such an amazing time in TV and to be on a show of this caliber… I still pinch myself.

TrunkSpace: You moved to Los Angeles after graduating college. As look back on your experience, locating to a city where so many people are dreaming the same dream, was it a difficult transition or did you feel right at home right away?
Thibeaux: I stumbled a bit when I got to LA – it’s not the easiest city to live in or navigate. I don’t know if I feel at home now. (Laughter) This is an interesting city. It’s a love/hate relationship. Some days I feel on top of the world and other days I feel like I have no idea why I’m here. In LA there’s a little bit of everything.

TrunkSpace: What has been the highlight of your career thus far?
Thibeaux: I have to say Runaways! It has changed so much for me and opened so many doors.

TrunkSpace: Time machine question. If you could jump ahead 10 years and get a glimpse of what your career looks like a decade from now, would you take that journey? If not, why?
Thibeaux: Hmmm… I don’t know! What if it’s really bad? That would be depressing. I think I wouldn’t do it, just in case. I rather live blissfully unaware. I’m happy now – it’s better to live in the present.

Season 3 of Runaways is available now on Hulu.