When Stephen King tweeted out props for the new zombie apocalypse series “Black Summer,” it didn’t only pique the interest of horror fans, it also sent a jolt of excitement throughout the cast. Series star Christine Lee, who plays Korean-speaking survivor Sun, reveled in the shout-out from the King of Horror, but more than anything, she enjoyed bringing a hero to the small screen that audiences are not used to seeing.

“There was so much satisfaction in playing an immigrant woman who turned everyone’s expectation upside down,” she said in an exclusive interview with TrunkSpace.

We recently sat down with Lee to discuss taking stylistic risks, her real-world zombie survival plan, and why she always ends up doing what her heart tells her to.

TrunkSpace: Starring in a Netflix series is an exciting journey in and of itself, but then Stephen King went ahead and gave it a thumbs up. What would 12-year-old you think about this chapter in your life if she had a glimpse of what was to come?
Lee: My 12-year-old self would have freaked out but told no one about it? I always wanted to be an actor but to imagine that I’d be in a show that Stephen King gave a shout out for, would have felt like a far-fetched dream to me.

TrunkSpace: “Black Summer” is a prequel to the hit Syfy series “Z Nation.” Is there a change in the on-set energy going into a job knowing that there will already be an audience waiting for you on the other side?
Lee: I think the creative team had a lot of confidence going into “Black Summer.” They’ve already made a show that ran for five seasons. They knew how to work together. Of course, we were taking a risk in stylistic choice. But John Hyams really trusted his team to bring their A game. And we did.

TrunkSpace: What were you most excited about exploring with your character Sun when you first read for her and what did you grow to love about her as time went on and more of her personality and journey were revealed to you? 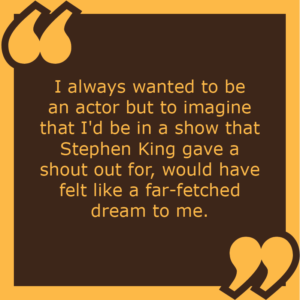 Lee: All I knew about my character for certain was that she was only going to speak Korean – I was very excited for that. But what was even better was that Sun turned out to be a total badass. There was so much satisfaction in playing an immigrant woman who turned everyone’s expectation upside down.

TrunkSpace: We touched on it earlier in our conversation, but Stephen King – the KING of horror – gave “Black Summer” some serious love on social media. Do you think that opened up the series to horror fans even more so than it already was, and from your interactions thus far, how are lovers of the genre embracing what you’re bringing to the small screen?
Lee: Oh yeah, his tweet was totally unexpected and it attracted more attention from the audience. I think the viewers find our show refreshing. Some of them are shocked by the fact there’s no build up and we just push them into this crazy experience. But honestly, that’s the best way to keep people on the edge of their seat.

TrunkSpace: When you’re working on a show that involves zombies, there must be some surreal moments on set from time to time. Did you have any “pinch me” moments where you looked around – zombies at the crafty table – and said, “Whoa… I did not see this coming in my career?”
Lee: My favorite moments on set are the times when I hang out with actors in zombie make up, just sipping coffee and talking about random things in life – like paying bills, or finding a babysitter. We could have the most intense moment on camera and then just ask, “When’s lunch?” It’s honestly the best. We all gel together because we love creating that fantasy and illusion for the audience. And to see what goes on behind the scenes is just a cherry on top.

TrunkSpace: For the viewer, the end result of a film or series is always the most memorable, but for those involved in a project we’d imagine it is the experience. What will you take from your time on Season 1 of “Black Summer” that you’ll carry with you for the rest of your life and career?
Lee: I came out as a different actor after “Black Summer.” I’m so lucky to have worked with so many creative and talented artists from that show. Thanks to “Black Summer,” I’ll always be hungry to create an innovative show for the audience.

TrunkSpace: We’ve all been there. It’s late at night, we’re tossing and turning because we’re unable to sleep, and we start thinking, “How would I do in a world where a real zombie outbreak occurred?” Now that you have some hands-on zombie survival experience, how would you fare if the world went the way of the undead? What would be your approach to seeing tomorrow’s sunrise?
Lee: I’ve thought about this a lot – and I’ve decided that I’ll put my cat as a priority. I don’t care if that will get me killed. So I’ll pack water, knives, cat food, and my cat. And run to an isolated place. Maybe I’ll use my old boss as a bait for zombies to buy some time. Just kidding (..or am I?)

TrunkSpace: Outside of acting, you also sing in a cover band. What is your absolute, hands down favorite song to cover and why?
Lee: “Kiss” by Prince. I love the quiet sexual confidence in his delivery until things blow up in his guitar solo. It always gives me so much joy to belt out that last verse, too.

TrunkSpace: What has been the highlight of your career thus far?
Lee: “Black Summer.”

TrunkSpace: Time machine question. If you could jump ahead 10 years and get a glimpse of what your career looks like a decade from now, would you take that journey? If not, why?
Lee: Hmmm… I definitely know I want to direct and produce. If the glimpse of the future says I’ll be successful, awesome. If it shows me that I’ll fail, I’ll still go all out. I’m an all-or-nothing kind of person. And I end up doing what my heart tells me to do even when people say it’s a stupid decision.